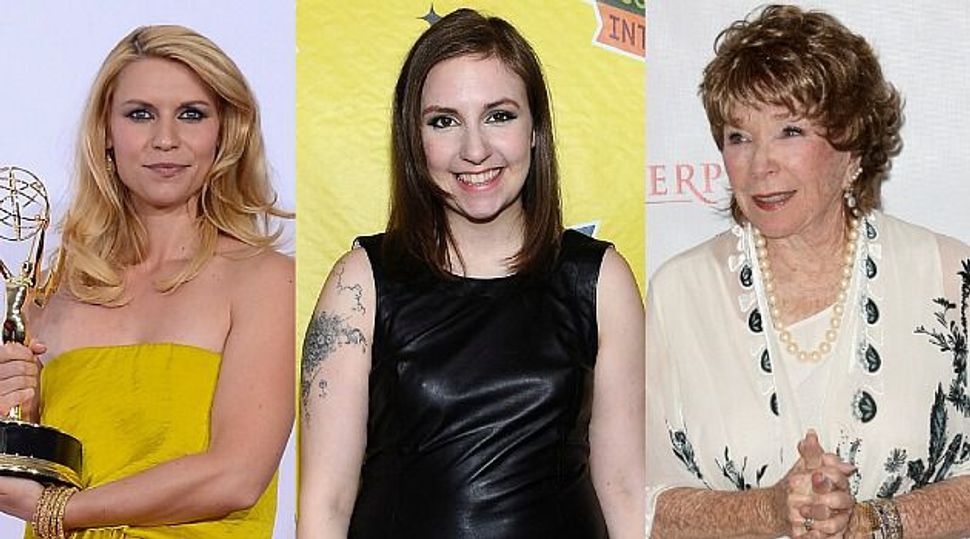 Claire Danes, Lena Dunham and Shirley MacLaine are among the many women bringing powerful female roles to the small screen. Image by Getty Images

As a fan of pop culture but also a critic of its frequent reinforcement of misogynist stereotypes, I am eager to see treatment of gender improve everywhere in 2013. In a media landscape dominated by male perspectives, and rife with misinformation about the reality of gender inequality, the following feminist media goals can and should tip the scales this year.

Actresses will continue to find their most powerful roles on the small screen, from the neurotic girls of “Girls” to the high-powered women of shows like “Homeland,” “Scandal,” and even “Parks and Recreation.” However, the overall TV landscape remains problematic. Meaty roles will remain rare for women of color, as well as queer or trans women, not to mention women who don’t fit Hollywood’s homogeneous beauty norm. Diversity behind the scenes languishes, too: Women of color directed just 1% of 2,600 television episodes in 2011.The outlook for the film industry is even bleaker. And so the first goal of 2013 is for consumers to advocate for an entertainment world in which viewers of all ages, races, religions, weights and gender identities can see people more like themselves onscreen.

Sadly, the journalism world is rife with the same imbalance as its more glamorous media counterparts. Talented female writers will publish great work next year, including deep thinkers like Slate’s Dahlia Lithwick and The New Yorker’s Emily Nussbaum. Yet raw numerical disparities in the print and online media worlds persist. This past year, the VIDA: Women in Literary Arts count of bylines in “thought leader” magazine and newspaper book review sections determined that most publications fell far short of byline parity. Even more dispiriting: The WMC and 4th Estate Project noted that, from April to August this year, “72 to 76 percent of newspaper stories covering the 2012 presidential election were written by men.”

The status quo will budge only with mobilization by all. In 2013, writers who aren’t white men should aggressively pitch stories. Meanwhile, editors must not only reconsider to whom they’re assigning, but also whether the “qualifications” they require are unintentionally discriminatory. For instance, is “serious” code for “white and male?”

All this agitating for diversity isn’t just a goal in and of itself; diverse voices lead to more accurate information and a wider breadth of stories told. Our media perpetuate cultural myths about rape, whether through newspapers reporting about how victims dressed or TV shows featuring plotlines about victims’ sexual histories. Instead of “legitimate rape,” “forcible rape,” “gray rape” or “rape-rape,” expect media activists to keep reminding cultural figures that rape is sex without consent. Period.

There are many hurdles on this road to equality. Women and minority ownership of media companies, for instance, lags far behind as well. Still, there is hope in the rise of community forums where gender issues get tackled, both loudly and publicly, like the Sisterhood. Here’s to a year of occupying the media narrative.

Sarah Seltzer is a Sisterhood contributor and a writer in New York City. Find her at www.sarahmseltzer.com and on Twitter @sarahmseltzer.