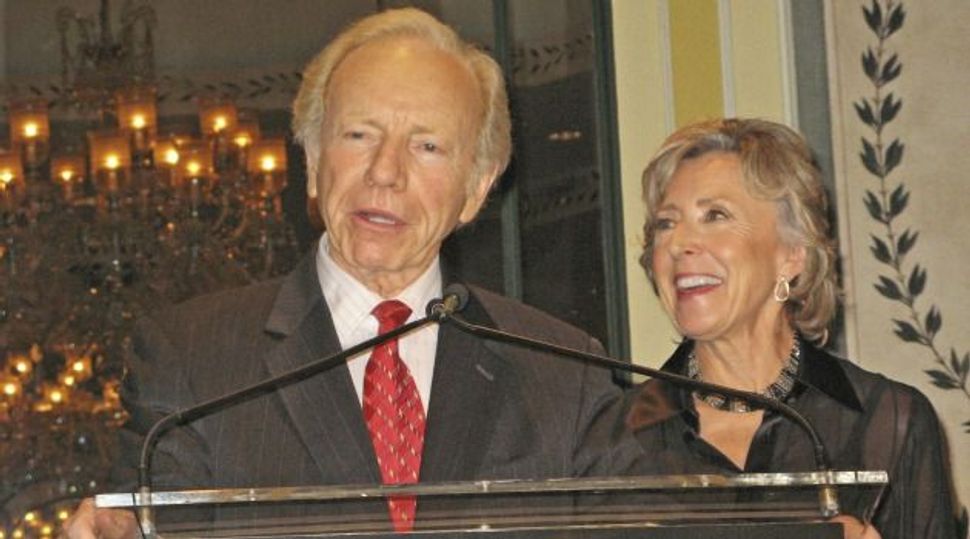 “I’m sorry I could not bring George with me tonight, but I’ve got him working on our film,” said Robert Edsel, founder and president of the Monuments Men Foundation and a special guest at the American Jewish Historical Society’s 2012 Emma Lazarus dinner, held on December 10 at the Center for Jewish History. Edsel was referring to George Clooney, who is directing and starring in a major motion picture based on the book, “The Monuments Men: Allied Heroes, Nazi Thieves, and the Greatest Treasure Hunt in History” (Center Street/Hachette 2009), written by Edsel and Brett Witter.

Edsel explained: “The Monuments Men were a group of men and women — museum directors, curators, art historians, archivists, artists — who volunteered during World War II to save and protect the great cultural treasures of Europe.” Edsel cited General Eisenhower’s “historic order stating that it was ‘the duty of all commanders to respect those monuments so far as war allowed.’ It marked the first time soldiers fought a war and at the same time attempted to mitigate damage to cultural treasure.” The event’s Emma Lazarus Award recipients were “Monuments Men” Harry Ettinger and the late Col. Seymour Pomrenze.

Honoree Harry Ettlinger, now in his late 80s, is one of the last surviving Monuments Men. He fled Germany weeks before Kristallnacht with his family. Six years later he became an American citizen and joined the U.S. Army. As a result of his fluency in German, he was transferred to the Monuments Men Fine Arts and Archive (MFAA) section. He recovered the famed stained glass windows of the Strasbourg Cathedral along with more than 900 treasures. Upon accepting the award, he said: “We have to respect each other not only as human beings, but also our cultures … to preserve them for the future. Because if we don’t there will be nothing. Just think of it: How would we feel to have white walls with nothing on them?”

Special guest Susan Eisenhower, granddaughter of President Dwight Eisenhower, president of the Eisenhower Group, and author of “Mrs. Ike: Memories and Reflections on the Life of Mamie Eisenhower” (Farrar, Straus & Giroux, 1996) spoke about Ettinger’s fellow honoree. “Col. Pomrenze was a member of the Eisenhower staff during the war. He personifies for us all the enormous sacrifices that were made by our fighting men and women and this very, very special band, who saved the art treasures of Europe,” Eisenhower said. “I teach a class on strategy and leadership, [including] World War II. We have an enormous amount to do to bring the history of this period to the younger generation. Addressing a group from 11 colleges on the eastern seaboard, when I asked them how many had had any World War II history in high school, only one raised his hand — and he was from Zimbabwe! This is truly not a joke. My students have absolutely no concept of the scope and scale of World War II!”

Jay Pomrenze accepted the Legacy Award in honor of his father, who died last year. The elder Pomrenze supervised the restoration effort at the Offenbach Archival Depot where the Germans stored more than 3 million Jewish works slated for destruction. His papers are now in the AJHS archives. “The discovery of the salt mines, caves and castles filled with hundreds of thousands of works of art created an epic problem,” said Edsel. “The task of returning each object to the country from which they were stolen took six years. By 1951 they returned more than 5 million objects … roughly equal to the contents of the Met, the Louvre, the Hermitage combined …. The Monuments Men also cared for 1,000 Torah scrolls, which the Nazis preserved in an effort to build their racial museums and institutes to demonstrate how Jews were sub-human.”

Stephen Solender, president emeritus of UJA-Federation, said: “Pomrenze is responsible for finding the looted library which belonged to the Vilna Jewish Community and the YIVO library and he was responsible for moving those items from Europe to the United States. He had 79,204 items in 530 cases and he personally accompanied this material to the Bremen Harbor so we can enjoy this [collection] in this building.”

“I remember you because your name is Masha, and my mother’s name was Masha,” U.S. Sen. Joseph Lieberman of Conn. greeted me during the reception at the December 10 Open University Foundation Gala at the Pierre, at which he and his wife Hadassah Lieberman were honored. “But,” he smiled, “when she entered school, they registered her as Mildred.” OUF president Ingeborg Rennert told the 300-strong festive crowd: “Thanks to the Open University of Israel [anyone] can climb the ladder of opportunity.” Open University of Israel president Hagit Messer-Yaron amplified OUI’s mission to develop the intellectual capital of Israel: “Unlike American students who enter college immediately, Israeli youth enter years’-long military service before resuming — if ever — a higher education. Open University of Israel is the only institution dedicated to providing access to higher education to all Israelis.” As noted in the dinner journal: “This includes ultra-Orthodox Haredi men and women, Israeli Arabs, and students with special needs, regardless of their background, [with] an open enrollment policy and rigorous standards with distance learning instruction.”

In response to gala chair Mimi Hass-Perlman’s recollection of Sen. Lieberman’s eventful trip to New York, which included “a vote on the Hill in the Senate, a train cancellation, train changes and more,” the senator joshed, “It was as close as I got to James Bond.” Lieberman thanked Elie Wiesel — who with his wife Marion — was among the prominent guests. “[Thank you] for all you have done for us … We take change as normal … We’re the generation to experience the miracle of the rebirth of Israel,” Lieberman said. “And to get the Yigal Award — [named after] a great pioneer, tremendous warrior. Most who led to the establishment of Israel were not religious. The dream of Israel could not have happened without the work of men and women like Yigal Allon — who was not religious. We are the People of the Book. We don’t carry icons or statues. We carry the Torah — The Book. And Open University is founded by the People of the Book.”

He addressed the need for making Open University accessible to “the Haredi potential from within Israel — out of their community into the life of Israel.” He concluded with a paean to the observance of the Sabbath. In each guest’s goody bag: a copy of the senator’s book “The Gift of Rest: Rediscovering the Beauty of the Sabbath” (Howard Books, a division of Simon & Schuster, 2011).