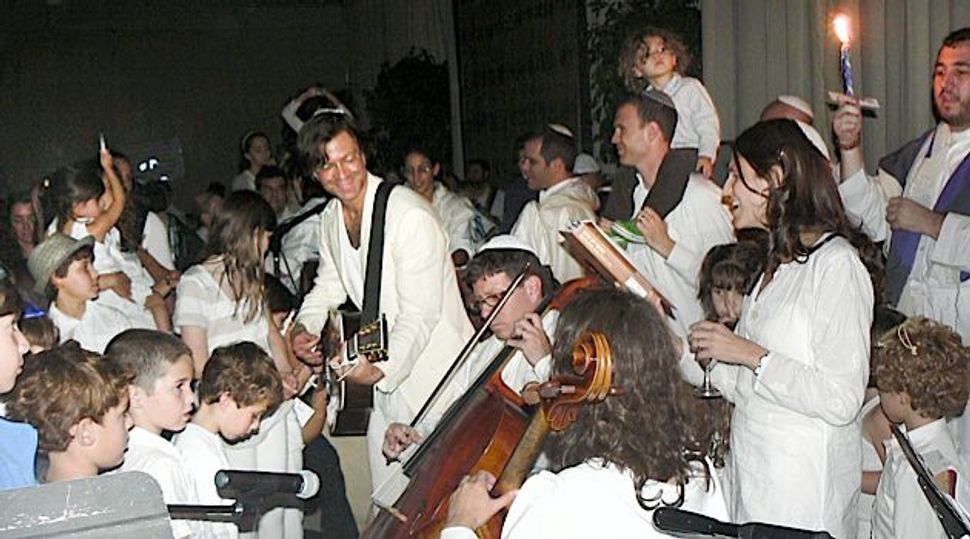 “Who can ignore that little science experiment you call IKAR?” says Rabbi David Wolpe in an online video “roast” of one of Los Angeles’ most un-orthodox Jewish congregations and its sometimes controversial rabbi, Sharon Brous. “It’s like Mike and Ike, compared to our crème brûlée.”

Wolpe, chief rabbi of Temple Sinai, a grand synagogue on upscale Wilshire Boulevard, was poking good-natured fun at the funky and folksy — but rapidly growing — phenomenon that is IKAR. In the video (scripted as a Purim prank by IKAR’s own in-house comedy writers), he goes on to gibe at Brous’s casual hairstyle and IKAR’s lack of a building of its own.

Brous is sticking with her hairdo. But IKAR, the famously anti-institutional spiritual community she founded with a handful of families eight years ago in a member’s living room, is now moving in some ways toward becoming a traditional institution more like Temple Sinai. Most notably, IKAR, whose members have worshipped for years in a rented auditorium, is planning to purchase a building of its own.

The move reflects the reality of a community that is today a powerful—and in some quarters, envied — force in L.A. Jewish life. But it’s not just the prospect of meeting mortgages, maintenance budgets and insurance costs that portends a seismic change for a congregation more used to flying by the seat of its pants. IKAR’S vision of that building, if it comes to fruition, will all but revolutionize American Jewry’s concept of what a synagogue is or can be.

In an email to the Forward, the congregation’s executive director and co-founder, Melissa Balaban, described “a dynamic center of Jewish engagement” that will “accommodate a wide range of uses including sacred space, open art studio space, a music lab, a library/beit midrash/beit café, outdoor gathering and garden space [and] a learning center (for children and adults).”

IKAR has identified “a lead donor” to back its plans, said Balaban, and raised initial seed money of some $500,000 in preparation for launching a major capital campaign. Its choice for a site has narrowed down to two possible properties, she said. And the L.A. firm Lehrer Architects is conducting feasibility studies of the properties to determine their suitability for all the activities IKAR envisions.

For some, this may convey a level of long-term planning and institutional seriousness previously unassociated with IKAR. But the congregation’s laid-back image was never the full story. Brous’s tousled hippie look and “whatever” spiritual approach has brought in hundreds of young unaffiliated Jews from the Boomer and Millennial generations. But the 39-year-old rebel is also a rebbe; one ordained at the Conservative movement’s Jewish Theological Seminary in 2001 who leads services conducted in Hebrew from the Conservative siddur.

Beyond L.A., Brous is known as an inspirational speaker and a returning Forward 50 honoree. IKAR — which means “essence” in Hebrew — stands alongside congregations such as New York’s B’nai Jeshurun and Kehilat Hadar as a leader in progressive, non-denominational Judaism.

Recently, Brous received a very public scolding from American-Israeli Rabbi Daniel Gordis for an emailed epistle to her flock during the recent Gaza conflict, in which she urged compassion for Palestinian children under fire, along with Israelis.

“I knew, even before reading Rabbi Brous’s missive,” Gordis wrote in the online newspaper, The Times of Israel, “that we Israelis are surrounded by enemies. When I finished reading her, though, I understood that matters are much worse than that.”

Gordis’s broadside provoked intense exchanges among a number of prominent Jews and occupied the cover of L.A.’s weekly Jewish Journal. Brous received plenty of plaudits along with a slew of “violent and inappropriate” hate mail, Balaban said.

On the local scene, IKAR has earned praise for its social engagement programs. Last April, after a year and a half campaign, IKAR together with an interfaith coalition won a sweeping change in LAPD towing and impound policies that had targeted immigrants. 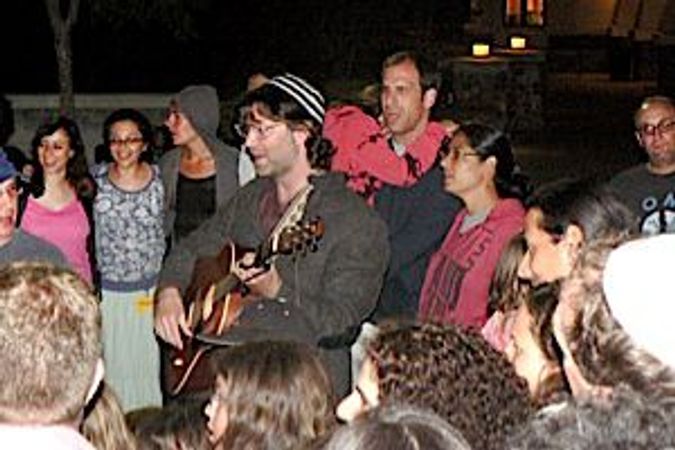 IKAR’s congregation includes a mix of Los Angeleno movers and shakers, many from the worlds of finance and entertainment. Board members include David Nevins, president of entertainment for Showtime Networks, Michael Ellenberg, senior vice president at HBO, and Lynn Harris, executive vice president at Warner Bros. City Council member Eric Garcetti, who could become L.A.’s first Jewish mayor in the election this May, is a member of the congregation. IKAR has become a campaign stop for other politicos, including Garcetti’s two main opponents — Wendy Gruel, who is married to a Jew, and Jan Perry, potentially L.A.’s first Jewish female African American mayor.

The IKAR signature style of free-form Shabbat davening may obscure some of the congregation’s underlying seriousness. Accompanied by a fervent drum circle along with, often enough, a gaggle of kids (including Brous’s) running higgledy-piggledy around the minyan, IKAR services can seem a bit, well, meshuge.

“I must admit,” says a Yelp reviewer of IKAR’s Shabbat services, “that until I got used to the bongos, Grateful Dead-like background vocals and creatively interesting versions of what in my youth were brutally boring musical prayers, I was looking over my shoulder to see if Mike Wallace and the ‘60 Minutes’ crew was there documenting this possible cult-like occurrence.” The late reporter Wallace never dropped by IKAR, but a recent visit by this reporter confirmed the description.

Building a house of worship was not on the agenda when a group of Jews met with Brous in a Westside living room in 2004. She had arrived in L.A. two years earlier with her husband David Light, an aspiring screenwriter, and their two children (they now count three). The group, which included Balaban and her husband, were asking Brous’s help in forming a community of Jews turned off by institutional Judaism, who nonetheless sought a Jewish life for themselves and their families. From that moment, the growth has been phenomenal. Today, IKAR numbers more than 500 families and has more than 60 children in its pre-school program.

While the congregation includes older followers, IKAR is particularly popular with young adults who attract kindred spirits. “We built something we ourselves liked,” said Joshua Avedon, co-founder of Jumpstart, who was in his thirties when he became one of IKAR’s co-founders, “and it turns out all our friends do, too.”

Rabbi Yosef Kanefsky, of B’nai David Judea, an Orthodox congregation in the Pico-Robertson area, and IKAR’s close neighbor, praised the congregation for “doing a terrific job at engaging and drawing in Jews who might otherwise not find a way to connect.”

With an annual budget of $2.5 million and a staff of 18 full-time and 23 part-time employees, IKAR is ready to move out of its rented digs in L.A.’s Westside Jewish Community Center and put down roots.

“We wanted to build the heart and soul of our community before finding a shell to hold it,” Brous told the Forward, “knowing, down the line, we would build. But I wasn’t interested in building just another synagogue.”

The future home Brous envisions for IKAR is a hipster version of the traditional Jewish community center. The café will offer food that is both kosher and organic. The music lab will include a state-of-the-art recording studio — an important feature for IKAR’s musical leader, Hillel Tigay, dubbed the “Rock Cantor” by his fans.

The L.A. Federation says it also wants to play a role. Federation president Jay Sanderson sees IKAR in its new home as a key component in his long-gestating concept of a network of community “hubs” to anchor L.A.’s geographically and philosophically disparate Jewish community. No budget has yet been drawn up for the initiative, called Nu Roots, which has been in the planning stages for 18 months. But Sanderson promised, “We’ll be working with them to raise funds for a specific area that fits this initiative.”

There is a hitch slowing down the process, though: finding the right building in the right geographic location — one that will allow the maximum number of Jews from the most diverse streams of religious observance to participate. In sprawling L.A., that is no mean feat.

“We have members from across the religious spectrum — some who barely recognize Hebrew letters and others who are strictly observant and walk to Shabbat services,” said Balaban. IKAR’s leaders want their new home to remain within walking distance during the Sabbath for those traditionally observant community members.

That means staying roughly in the center of L.A., an area Balaban defines as equidistant from downtown and the beach, encompassing the neighborhoods of Pico-Robertson, Carthay Circle and Miracle Mile. With L.A. real estate prices now on the upswing, there’s urgency to make a decision. But other cautions abound.

“They’re taking a massive leap to becoming an institution with a building and ten times the expenses,” observed Sanderson. “All the things you want to avoid by being a grass-roots organization hit you in the head.”

The IKAR-ites are undaunted. “So much of what we do is what you do as a shul,” said Balaban. Now, she said, the congregation’s challenge is “integration of the secular with the magic of IKAR.”