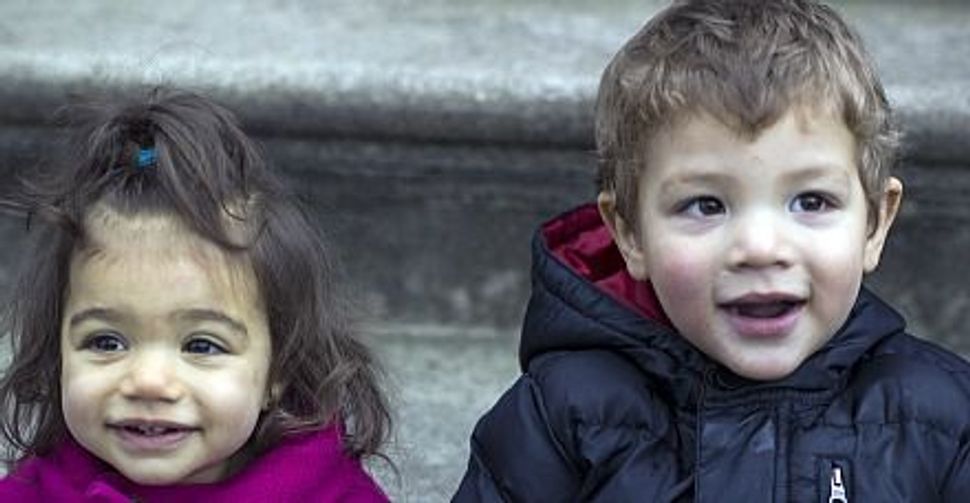 The American Jewish community today is a kaleidoscope of diversity. The fall of the Soviet Union, the decline of overt anti-Semitism in the United States, an influx of converts to Judaism and the acceptance of interracial and interfaith marriage have forever changed the face of American Jewry. Our community is wonderfully heterogeneous and full of fascinating stories.

The Forward is focusing on children under the age of 13 — our Jewish future — this year for a project examining and documenting the changing Jewish landscape. Readers are encouraged to join us by submitting photographs of their children, nieces, nephews and friends, using this photo essay as a guide.

In my search for a representation of this melting pot of Yiddishkeit I reached out to synagogues, online parent groups and almost everyone I know in the New York area. Each family I met was kind and understanding and willing to have their children photographed. In many cases they opened their homes to me — a stranger with a camera. The children I photographed were incredibly sensitive and forthcoming. Perhaps it was the emotionally charged atmosphere following the recent events in Newtown, Conn., but I could feel the families’ burning hope in the air each time I clicked the shutter.

Karina Weinstein, a Ukrainian-Russian Jewish immigrant to the United States, was in Mexico for a graduate school public policy project when she fell in love with Juan Cuautle Juarez. They now reside in Brooklyn and are raising their son, Max, in a Jewish home.

Alina Adams, who grew up Jewish in Odessa, found a common bond with Scott, an African American raised in Harlem, over their grandmothers’ stringent advice that they have to work twice as hard in school to be considered half as good. They are now raising their three children, Adam, Gregory and Aries, in a Jewish home on the Upper West Side.

Elena Tavarez, whose mother is modern Orthodox from Brooklyn and whose father is Puerto Rican, married Fritz, whose background is Haitian and Puerto Rican. They are now raising their children, Mateo and Edie, as Jews in Elena’s childhood neighborhood of Windsor Terrace.

Ellen and Peter Tilem adopted Eliana from China. During the routine screening required for adopting a child, Peter discovered that he had a large thymic carcinoma in his heart and lung. He has since recovered, and the couple continues to raise Eliana, along with her two sisters, as Orthodox Jews in New Jersey, where they attend yeshiva.

Sylvia and Sammy Fallas, whose families have remained in Brooklyn since their great-grandparents immigrated from Syria almost 100 years ago, currently raise their daughter, Betty, in Midwood.

Malka Husarsky grew up on a block in Midwood filled with family and now lives in Ditmas Park with her husband Menachem, a fellow religious Ashkenazi Brooklynite, and their two children Elie and Meira.

These children are just a handful of the thousands of young people whose stories force us to reevaluate our assumptions about who is an American Jew.

Won’t you join us in documenting the new face of American Jewry?

Ari Jankelowitz is a photographer and writer living in Brooklyn. He has been a contributor to the Forward since 2008.

The Forward will be accepting submissions for our online Jewish diversity photo project, “The Way We Look Now.” Please send photos of children up to 13 years of age to [email protected]. They must be your children or you must have permission from their parents.