The Year of the Good Father 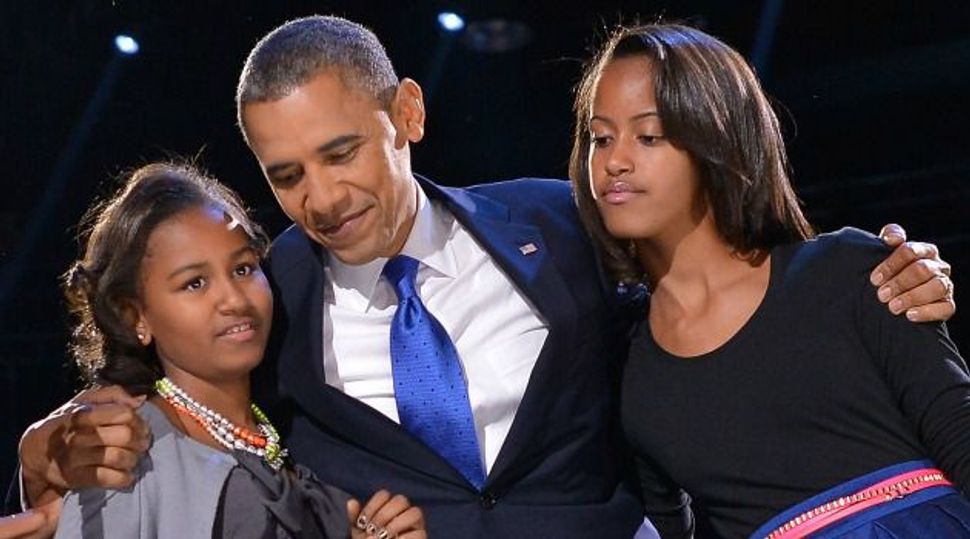 The answer came to me when I was driving my daughter to her bat mitzvah training. We were listening to postelection radio coverage, but I was not really paying attention because my daughter had just told me she wasn’t practicing her Torah portion when she was at her mother’s house.

I was in a tough spot. If I became visibly frustrated and pushed her too hard, my daughter would experience the learning process as a slog, which would suck the joy right out of it. But if I let her think it was okay to study only when she was with me, there was no way she’d be ready in time for her bat mitzvah.

Just then, a story on NPR cut through the noise of my frustration — something about the communication styles of presidential candidates Barack Obama and Mitt Romney — and it hit me that these two father figures represented very different visions of what it means to be a man today.

Romney, with his sublimated emotions and cool, logical approach to problem-solving, was often described by media pundits as being unable to connect with voters. Obama, on the other hand, rated in polls as the more likable of the candidates. Where Romney advocated hands-off government, lambasting in a leaked fundraising video those who believe they are “entitled” to government help, Obama promised tough love. Take responsibility for your actions (and pay your fair share of taxes), he said, and we’ll take care of you when you need help.

The Obama approach to my daughter’s lackluster study habits would be to place the responsibility, and the joy of that responsibility, into her hands, while supporting her when she needed it. Which would be often (she is only 12, after all). I could ensure progress and practice on the days she was with me, while helping her realize that she could motivate herself to study when she was at her mother’s house, too.

The Romney approach would be to tell her she was messing up by not studying, and let her face the consequences if she didn’t take responsibility for her progress. A failed bat mitzvah performance would be a valuable life lesson, but I’m not sure her bubbe and zayde would approve.

The Obama model made the most sense to me, and his victory in the general election sent a clear message to men: Be strong. But be sensitive, too.

Obama has had ample opportunities in the last year to demonstrate that confluence of strength and sensitivity. Whether it was showing both resolve and sadness in the loss of Americans during the Benghazi debacle, learning from his mistakes after the first debate, standing arm-in-arm with Chris Christie after Hurricane Sandy or shedding a very public tear in the wake of the Newtown school massacre, Obama has been both resolute and compassionate.

Obama’s balanced masculinity is finding its way into pop culture as well. In the past, movie dads were portrayed as hapless and incompetent. But 2013 is shaping up to be the year of the good father. If Judd Apatow’s vision can evolve from the clueless new father Seth Rogen in “Knocked Up” to the nuanced struggles of Paul Rudd in “This Is 40,” then I’m optimistic.

On the small screen, TV dads are flawed, to be sure. But you never doubt they love their children and will sacrifice everything for their well-being (RIP, Eddard Stark of “Game of Thrones”). They may be gruff and goofy (the dads in “Modern Family”), or depressed and struggling (“Louie”), but they are also loving in their own way, building up their kids’ sense of self and letting them fail when they need to, but being right there to help them back up again every single time.

It’s almost as though today’s television writers have been reading Foster Cline and Jim Fay’s “Love and Logic” parenting books, which advise parents to let their kids fail when the stakes are low, and then give them the warmth and empathy they need to bounce back so that they’re better equipped to face the challenges of adulthood.

In 2012, you couldn’t open up an issue of The Atlantic without finding articles about the lack of quality men and the rise of women in U.S. society. Though many readers responded to these articles angrily, I saw them as a call to action.

With the economic meltdown of the last several years disproportionately affecting men, and the pop culture depiction of men as sappy couch potatoes living in the shadows of their career-focused wives, many men have begun to feel disempowered and confused. Do I open the door for a woman? Give up my seat on the bus? If my spouse has a more successful career than I do, does that make me less of a man?

(The answers are yes, yes and no.)

In 2013, as we watch a slow but steady economic recovery and a president who’s secure in his duties and his masculinity, we must bring manly men back into the equation. Too many children are being raised without positive male role models — more than ever before — and they need us to step up.

Today’s kids need to encounter more men who are self confident and open-hearted with their feelings — guys who fight for marriage equality (thank you for making that cool, Obama), who help their daughters with their pigtails (and teach the boys in their lives how to tie a tie), who can change a tire and who shed a manly tear when “Grey’s Anatomy” ’s McSteamy dies.

In 2013, men — and not just fathers — will be called upon to move into this next phase of emotional development: to be sensitive and strong. We owe it to ourselves, to the younger generations, and to the powerful women and men we love.

The Obama approach has proven effective with my daughter. I’m strict with her about studying when she’s with me, encouraging each small step of success with hugs and high-fives. As she grows more confident in her learning, she wants to take on more and more of the bat mitzvah service on her own. And the only way she can do that is by applying herself, even when she’s not with me.

Eric Elkins blogs about being a single parent at datingdad.com. He owns the social media consulting agency WideFoc.us, and is co-founder of E-3 Events, a community organization that produces Jewish arts and culture events. His first young adult novel is “Ray, reflected.” (Ghost Road Press 2007)

The Year of the Good Father