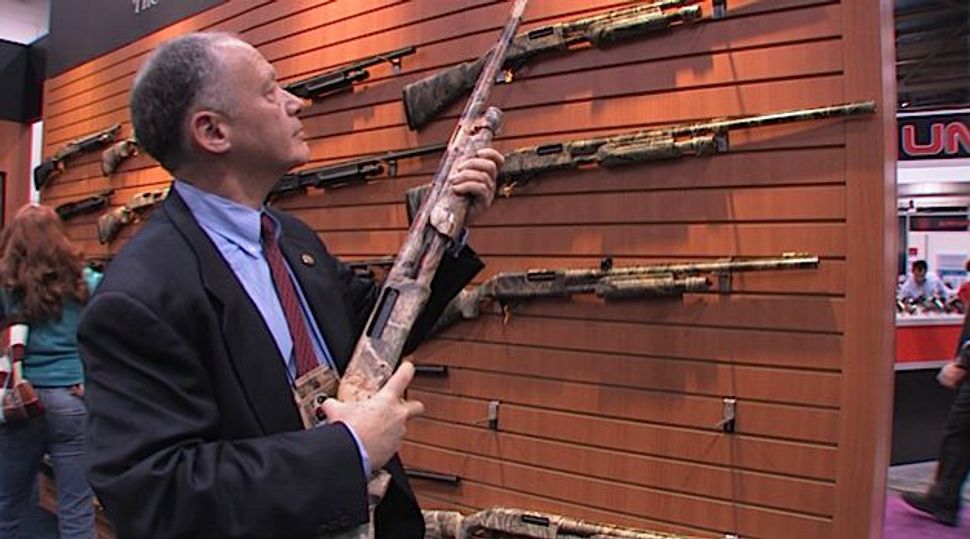 True Believer: Richard Feldman, the NRA?s first Jewish lobbyist, came to support gun rights after a stint as a cop. Image by Courtesy of richard feldman

As a child growing up in the Long Island suburb of Lawrence, N.Y., Richard Feldman, the National Rifle Association’s first Jewish lobbyist, did not encounter many gun owners. He first held a firearm at the age of 12, at a Jewish summer camp shooting range.

It was only a decade later, when serving on the Cambridge, Mass. police force, that Feldman came to the realization that “gun control does not equal crime control.”

Feldman is one of several activists for gun rights who stand out in a Jewish community that vocally supports regulating and limiting those rights.

Holding top positions in the NRA and public advocacy groups supportive of gun owners’ rights, Jewish gun backers draw on everything from the Holocaust to Israel’s experience in fighting terror to justify the battle against limiting access to guns. 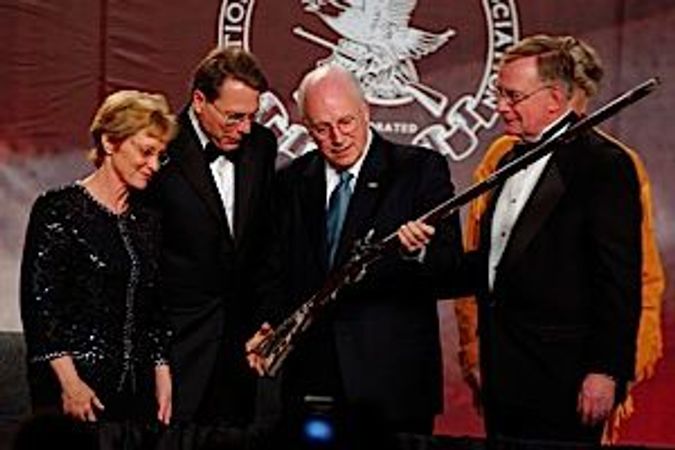 “Jews don’t like to talk about their guns, because it is not politically correct,” said Feldman, a former regional political director for the NRA who now heads the Independent Firearms Owners Association. “People know it is an issue better to avoid.”

The Newtown, Conn., shootings this past December raised the issue of gun control to a top place on the agenda of organized Jewry, not to mention many Jewish members of Congress. Many organizations are not only expressing their support for measures aimed at limiting the sales of certain weapons, but are also seeking to mobilize the community to take a leading role on the issue. Jewish lawmakers in the Senate and the House of Representatives were among the first to introduce legislation supporting gun control following the December 14 shooting rampage that left 27 dead, 20 of them children of just 6 or 7.

But there are prominent Jews on the other side. Feldman, for example, was among the gun rights advocates Vice President Joe Biden invited to the White House for a January 10 dialog on legislation the administration is now developing to curb private citizens’ access to some types of arms and ammo.

The Jewish community has historically strongly supported gun control, although the issue has slipped in recent years to the bottom of the Jewish organizational agenda, reflecting the lack of interest in gun control on the national level.

Jewish support for tougher restrictions on guns is deep rooted. In part, it coincides with the community’s leaning toward the Democratic Party and toward the liberal side of the political spectrum. It’s a world in which gun control is part and parcel of a constellation of identifying issues. According to Rabbi Eric Yoffie, the former president of the Union for Reform Judaism, Jewish support for gun control is also a product of the fact that most American Jews live in metropolitan areas, where guns are more frequently associated with gang wars and drug deals than with firearms in individual homes for self-defense. A wholesome “gun culture” consisting of recreational hunting and target shooting is relatively rare in such areas and, in any case, not popular with Jews.

Jews affiliated with the Republican Party or who live in areas where gun ownership is widespread tend to demonstrate more support for gun rights. House Majority Leader Eric Cantor, a Virginia Republican, holds a top rating from the NRA and received $7,450 in campaign contributions this election cycle from the gun lobby. Still, even minor, seemingly incidental brushes that Cantor has had over the years with restrictions on unlimited access to guns — such as his appearance at a GOP rally for families held last October at a venue that banned firearms — have provoked attacks against him from a local pro-gun rights organization. At the event, dozens of signs were placed, noting that the NRA has endorsed Cantor, a measure seen as essential in order to overcome criticism of being soft on guns.

Democrats, even from the South, face a more complex situation. Tennessee Rep. Steve Cohen owns a .38 Special, a police handgun that, he told the Forward, was given to his father by one of Elvis Presley’s bodyguards. Cohen has a license allowing him to carry a concealed weapon, but he does not go around with the gun.

“I support the right to carry pistols and rifles, but I don’t think it should be unlimited,” Cohen said. His legislative record reflects this approach. Cohen sponsored the bill allowing concealed weapons in Tennessee, but he added safeguards to the legislation. He also supports banning the sale of semi-automatic assault rifles and of high-capacity magazines, two of the proposed limitations that are due to be presented to Congress this year.

Cohen, who grew up in the South, said there are many Jewish residents in his district who “love their guns,” although he admitted that the Jewish community is not a “bastion” of gun culture. “There are no Hopalong Cohens,” he said.

Kentucky’s Jewish congressman, John Yarmuth, is an avid supporter of gun control, despite the fact that he represents a state that has many gun owners. Yarmuth, a Democrat, prides himself as being “the only member of the Kentucky delegation to receive an ‘F’ rating from the NRA.”

Former Arizona congresswoman Gabrielle Giffords, who retired from the House of Representatives after sustaining severe gunshots injuries during an assassination attempt, was also a gun owner who held a complex approach to gun control. Giffords supported a ban on the sale of assault weapons but, at the same time, opposed limits on carrying weapons in the District of Columbia, a battle that gun control advocates had lost in Congress. After the Newtown shooting, Giffords visited the town to express her condolences. She met with New York City Mayor Michael Bloomberg in a show of support for his campaign to limit the sale of guns.

Alan Gottlieb, one of America’s most vocal supporters of gun rights, grew up in New York City and, like many other Jewish pro-gun activists, encountered firearms only as an adult. Gottlieb, founder of the Second Amendment Foundation and head of the Citizens Committee for the Right to Keep and Bear Arms, is a prolific writer on the issue of gun rights. Like other Jewish supporters of access to guns, Gottlieb argues against the common perception that Jews are a rarity on the pro-gun side of the debate.

“The truth is that there are quite a lot of Jewish activists in the gun-rights movement,” he said, “but there is that perception that all Jews are on the other side.”

Gottlieb became involved in gun rights advocacy as a student, as he took up other conservative causes focusing on personal freedoms and limiting government.

Feldman, whose parents, a psychiatrist and a social worker, never owned guns, arrived at his views against gun control after college. During his stint as a cop, while responding to a theft call in North Cambridge, Feldman noticed that the property owner did not own a gun despite having been burglarized several times. The victim told Feldman he could not get a permit for one. Feldman found that the man had no criminal record. He concluded that the man had been rejected because he was a recent immigrant from Latin America.

“I had to revisit everything I knew about gun control,” he said, “I learned that the history of gun control in America is one of racism, sexism and elitism.”

Other leading Jewish voices on behalf of gun owners include Sandy Froman, an Arizona attorney who served as the NRA’s president from 2005 to 2007, and Alan Gura, an Israeli-born attorney. It was Gura who led some of the gun rights lobby’s courtroom successes, including McDonald v. Chicago in 2010. The landmark Supreme Court decision found that the Second Amendment’s guarantee of the people’s right to bear arms as part of a “well-regulated militia” applied to individuals even outside a militia context and thus limited the government’s right to regulate their individual use.

In conversations, pro-gun Jewish activists quickly pull out an entire set of arguments addressing each gun control measure, from limiting the sale of assault weapons, which they argue are no different from any other gun, through limiting magazine size, a move they claim is impractical and useless, to closing the gun show loophole, which they say has little to do with gun violence.

But Jewish gun backers also turn to Jewish history for support. “I wish there had been more armed Jews when Hitler came to power,” Gottlieb said. “I think the government should not have a monopoly on owning firearms.” Others argue that had the Jewish community been armed, Nazi SS units would have suffered losses that would have led Hitler to reconsider his plan to exterminate Europe’s Jews.

Michael Berenbaum, an internationally recognized scholar of the Holocaust, labeled this idea “preposterous.”

“The Germans conquered half the Soviet Union, and France and Poland, and the rest of Europe, against massive armies with huge weapons,” said Berenbaum, who was project director of the United States Holocaust Memorial Museum in Washington. “Look at what it took to defeat the Germans.”

According to Berenbaum, “The huge disproportion of power held by the Nazis, and their readiness to use their power for total destruction” would not have been changed had Jewish civilians had guns. “The most you could say is, it might have caused the Nazis to have greater casualties, as it did in the Warsaw Ghetto. It would have exacted a cost. But the idea that Jews with guns would have stopped the Holocaust is not in the realm of the conceivable.”

Another argument frequently raised is that Israel, a country where guns are abundant, does not face a serious gun violence problem. Gun licensing in Israel, however, is a complicated process, and most firearms are held by military or police forces, not by citizens.

Going a step further, Gottlieb suggested that the perception of Jews as being opposed to gun rights has been fueled by anti-Semites and helps reinforce their stereotypes about Jews in America. “It strengthens the notion that Jews do not support the values held by most Americans,” he explained.