Walk Down the Jewish Chocolate Trail 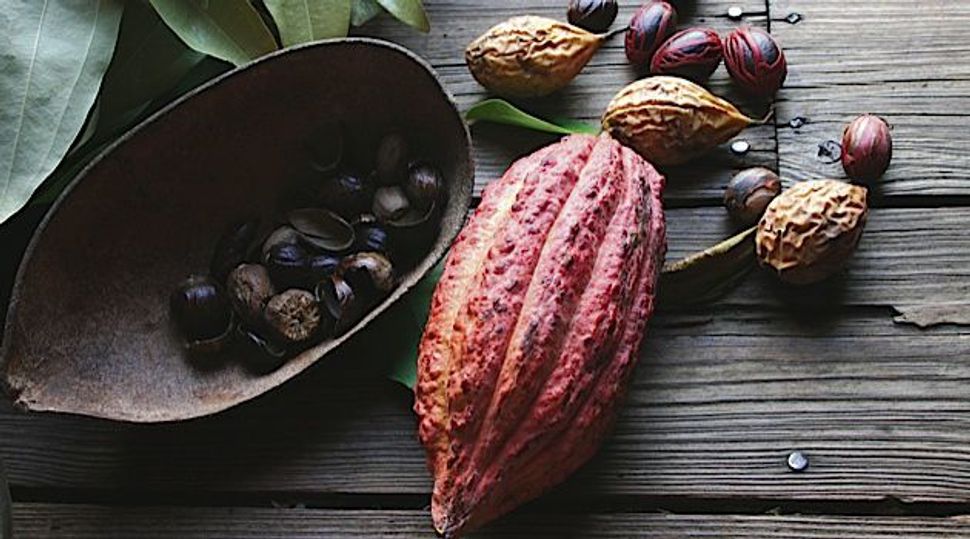 Bean to Bar: Rabbi Deborah Prinz traveled to the globe?s chocolate meccas for five years in search of several-hundred year old tale of Jews and chocolate. Image by thinkstock

If there is one attribute that all Jews across the spectrum possess, it’s the pride we feel when a fellow Jew accomplishes something noteworthy. Many of these achievements are easy to spot: Albert Einstein introducing the world to the theory of relativity; the critical role that Jews played in advancing the civil rights movement, or how a man named Morrie Yohai invented the beloved Cheez Doodle (true story). Others have been lost or concealed over the centuries. These are the stories that, for the sake of scholarship and our collective desire to kvell, need and deserve to be excavated.

Take Jews and chocolate. There are Hanukkah gelt, yes, and chocolate babka to consider. But a book by Rabbi Deborah Prinz, “On the Chocolate Trail: A Delicious Adventure Connecting Jews, Religions, History, Travel, Rituals and Recipes to the Magic of Cacao,” suggests that the connection between the Jewish people and the cocoa bean is much richer.

Prinz is a Reform rabbi by training and a self-professed chocolate obsessive by birth. She is the kind of person who will drive miles out of her way for an exceptional piece of chocolate. So when she read a brochure at a chocolate store in Paris that proclaimed, “Jews brought chocolate making to France,” her curiosity was piqued.

Her research was not immediately or unanimously encouraged. Early on, a colleague dismissed the project as futile — “like looking for a needle in a haystack.” Prinz pushed on anyway, and thankfully so. Over the course of five years, she played the role of both journalist and enthusiast, traveling with her husband, Rabbi Mark Hurvitz, to France, Mexico, Belgium, Israel, Spain, Switzerland and other chocolate meccas, in search of clues in the cobblestones. Her personal delight at the unusually good fortune of the task is apparent within the book’s pages. (“We had to eat more chocolate — for research’s sake” is a representative and envy-inducing refrain.)

And yet the resulting book is far from frivolous. It is the first book to tackle the subject of Jews and chocolate at any significant length, and Prinz didn’t shy away from intense historical research to do justice to the project. In between trips, Prinz spent ample time digging in archives for merchant ledgers, diary accounts, Inquisition records and other source material to lend historical heft to her on-the-ground findings. “On the Chocolate Trail” is at its most compelling during these moments of scholarship.

Weaving together history and personal narrative, Prinz makes a lively and convincing case that Jewish legacy is interwoven with the global story of growing, processing, crafting and consuming chocolate. (The cocoa-focused recipes she includes along the way extend the book’s use to kitchen from living room or classroom.)

Prinz begins her story with the Jews of Spain during the time of the Inquisition, the same time that explorers brought the cacao bean to Europe from the New World. Despite being forced into exile or to convert, Jews quickly became involved in the trade of cacao beans and helped spread it around the globe.

She writes of how in Bayonne, France, 20 miles from the Spanish border, “Jews… were crucial leaders in the contraband trade with Spain, including the business of exporting, re-exporting, and smuggling chocolate.” By the 17th century, a community of Jewish craftsmen thrived there as chocolate makers. As a result, Prinz writes, “In 1681 Bayonne leaders implemented an ordinance to limit Jews’ wholesale chocolate trade… forbidding Jewish sales in retail shops or directly to individuals in Bayonne.” More restriction followed, and by 1860, “only two Jewish artisans practiced their craft” — a discriminatory blemish omitted from the rosy pamphlet that Prinz found in the Paris chocolate shop.

In 18th-century Mexico, Jewish refugees, conversos and crypto-Jews were involved in all stages of importing and producing chocolate. Prinz writes that chocolate also became incorporated into Jewish ritual: “Mexican crypto-Jews used [warm drinking] chocolate for welcoming the Sabbath because wine was scarce in New Spain.” Some families also included hot drinking chocolate, along with the more customary hardboiled eggs, as part of the ceremonial shiva meal.

Meanwhile, in Colonial America, two Sephardic clans — the Gomez family in New York and the Lopez family in Rhode Island — traded in and produced chocolate before the advent of Baker’s Chocolate Company, which started in 1780 and is typically regarded as America’s oldest chocolate maker. There is even historical speculation that Jews brought cocoa beans to North America sometime in the seventeenth century.

While Prinz’s original inspiration for the project was the Jewish connection to chocolate, her research also encompasses other religions’ connection to it. She devotes the second portion of the book to the people of pre-Columbian Mesoamerica, who were among the first to celebrate and consume cacao; the convents and monasteries of Europe that produced chocolate sweets, and how the famous English chocolate company Cadbury has deep Quaker roots.

Prinz also notes the places where the Jewish and Christian pursual of chocolate overlapped through the centuries — both in relative peace as traders and as merchants — and also how Jewish oppression contributed to the chocolate diaspora. Flashing forward to 1938, for example, a prominent Vienna chocolatemaker named Stephen Klein fled Nazi rule and moved to America. There he established Barton’s Bonbonniere, which today is better known as Bartons Candy. By shedding light on these moments of context, Prinz manages to illuminate Jews’ important contributions to chocolate while avoiding the pitfall of suggesting that those contributions occurred in a vacuum.

As Prinz writes, the Jewish connection to the chocolate industry endures today. There are international and boutique chocolate makers in Israel, and many Jewish chocolatiers on the scene in America, including Larry Slotnick, who co-owns the fair-trade chocolate company Taza, and Oded Brenner and Max Fichtman, whose beloved Max Brenner chocolate brand, now owned by the Israeli company Strauss-Elite, has gone global. Whether Prinz continues to track the Jewish chocolate trail or moves on to another subject (if she is taking suggestions, I nominate “Jews and coffee”) remains to be seen. But with her book on the shelves, and plenty of chocolate left to sample, the journey will certainly continue to be sweet.

Mexican Hot Chocolate
Reprinted, with permission, from “On the Chocolate Trail“ by Rabbi Deborah Prinz

1) Melt the chocolate in a double boiler or a large bowl set over a simmering pan of water.

2) In a separate heavy saucepan, heat the milk and cream on low until hot, but not boiling. Add 3 tablespoons of the hot milk mixture to the melted chocolate and mix well. Stir the rest of the milk mixture into the chocolate, along with the sugar, chile powders, cinnamon, cloves, and vanilla.

3) Whisk the chocolate mixture briskly until thickened, about 3 minutes, and ladle into mugs.

Leah Koenig writes a monthly column on food and culinary trends. Contact her at [email protected]

Walk Down the Jewish Chocolate Trail