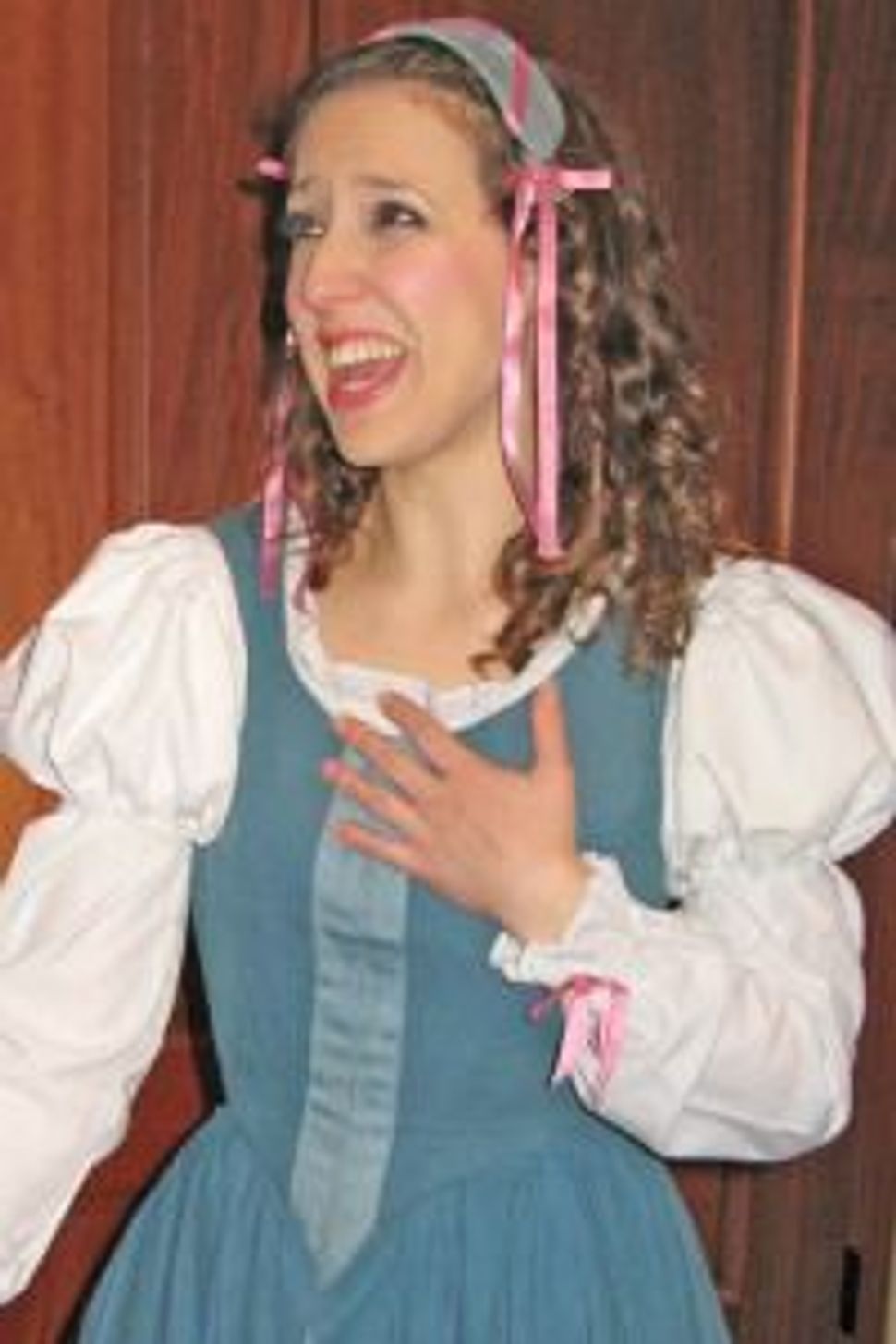 Were it not for Queens College professor Joseph Landis, who died January 6, at the age of 95—Isaac Bashevis Singer and his wife, Alma Singer, might never have come to my home for a vegetarian Friday-night dinner of eggplant parmesan casserole. Founder and director of The Jewish-Yiddish Studies Program at Queens College during the 1970s and ’80s, Landis brought the smetene, the crème de la crème, of Yiddish poets, scholars, actors and writers — including Singer — to the students. Following the January 8 intimate gravesite service at the Workmen’s Circle/Arbeter Ring’s section of Wellwood Cemetery, in Pinelawn, N.Y., his colleague and friend Thomas Bird, professor of Russian and Yiddish in Queens College’s department of European languages and literatures, told me: ”Landis’s tenure can best be described as the ‘Golden Age of Yiddish Studies at Queens.’”

I was among the lucky students during the unforgettable 1973 fall semester, when Landis offered a course titled “The Novels of Isaac Bashevis Singer — With The Author Present.” The course was oversubscribed, with students crowding the walls and sitting on windowsills. We were required to read a Singer novel a week and then have a discussion and a question-and-answer session with the impish author, who opted to sit in a regulation-size classroom chair, facing the students, with Landis behind him at a desk. The week that we read “The Magician of Lublin,” a student, in an attempt to impress Singer, delivered a psychologically infused analysis of the motivation of the novel’s womanizing rogue, Yasha, the magician, and asked Singer what prompted him to develop the character’s persona and actions. Singer smiled, shook his head and, in heavily accented English, told the young man, “I create a caracter and the caracter does vat the caracter vants.” Landis was delighted. It was after this class that I invited Singer — whom I last saw at my father’s funeral, in 1966 (they had known each other in prewar Warsaw) — to dinner at my home.

“Joe’s vision was a warrant, a desire to transmit to the students a vision of a shenere un a besere velt [a more beautiful and better world],” Bird told me a few days after the funeral. “What Uriel Weinreich [author of the Modern English-Yiddish/Yiddish-English Dictionary] did for City College and Columbia University for linguistics, Landis did for Yiddish at Queens College.”

Among Landis’s contributions to the Jewish community at large were the 1970s Sholem Aleichem Festivals that he created, held at Queens College’s concert-size Colden Center. Among the celebrities who attended these musical and dramatic simchas was theater-film-stage star Molly Picon. When she walked down the aisle to get to her seat, she typically received a standing ovation from the adoring crowd. Another highlight was Queens College ‘s president (1971–76), Joseph Murphy, who welcomed festival audiences with “khaverim un fraynd,” comrades and friends, in a resonant Yiddish that he had learned from his Jewish father-in-law. He followed this with several minutes of commentary — in Yiddish — about the college’s Yiddish offerings as well as about the concert program.

Among the legions of students who passed through the 1970s’ stellar Jewish studies program were Corey Breier and Jeffrey Wiesenfeld. Breier is now president of Yiddish Artists and Friends Actors Club and a member of the board of trustees of the National Yiddish Theatre-Folksbiene. He helped rescue the archives of the Hebrew Actors’ Union (now at YIVO Institute for Jewish Research). Wiesenfeld is chairman of the board of trustees of Folksbiene, with whom I shared the stage in a Queens College production of Abraham Goldfaden’s operetta “Di Makhsheyfe” (“The Witch”). It was directed by Yiddish stage and film diva Miriam Kressyn, who succeeded Yiddish theater grande dame Ida Kaminska as director of Queens’ College’s Yiddish Theatre Program.

One Yiddish poem in particular could describe the loss of Joseph Landis: “A Demb Is Gefaln,” “An Oak Has Fallen,” by Kalman Liss.

Amy Maude Helfer, in a blue 15th-century style dress, premiered as the character Phoebe in the “The Yeomen of the Guard,” at the January 8 production by New York Gilbert & Sullivan Players, held at New York City Center. As the curtain rose, Helfer wistfully sang the production’s opening song, “When Maiden Loves, She Sits and Sighs.” I wondered what librettist William Gilbert and composer Arthur Sullivan would have thought of a female Jewish cantor portraying so pivotal a role in what, the program notes state, “is the most operatic of G&S’s masterpieces.” 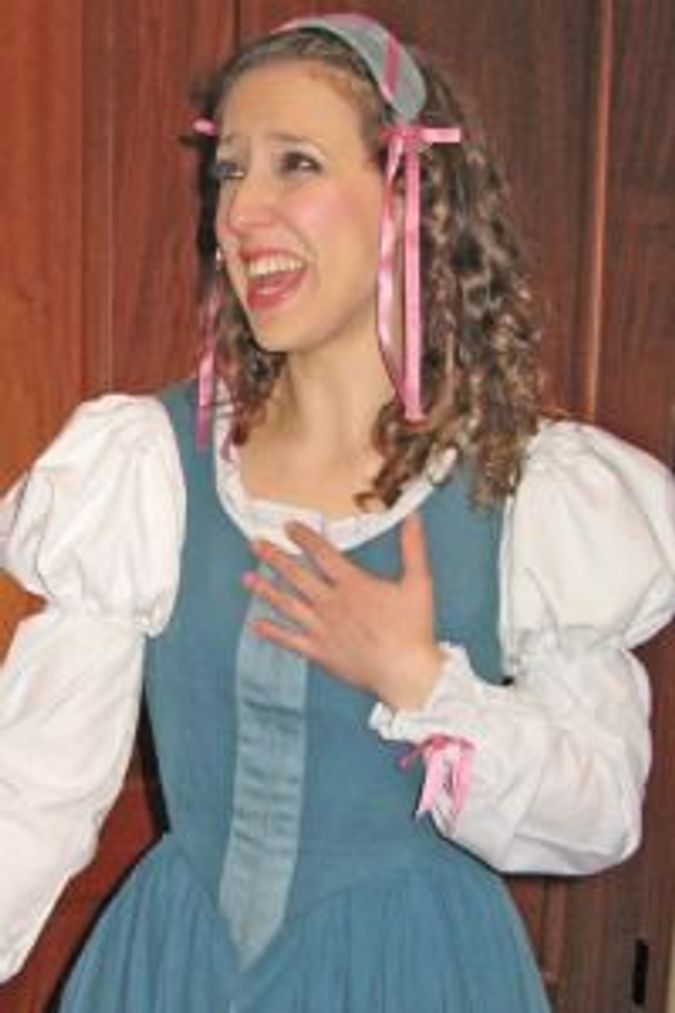 Helfer, who has been with NYGASP since 2008, also performed as the character Pitti-Sing and in the ensemble of “The Mikado,” which opened on January 4 at New York City Center. At the post-curtain party for “Yeomen,” admirers besieged Helfer, still in costume, as they did the more than a dozen key performers of “Yeomen.”

A graduate of Oberlin College’s Conservatory of Music, in Ohio, Helfer told me, “I’ve been a cantor in Elyria, Ohio, at Temple B’Nai Abraham and for the past eight years for the High Holidays at Temple Beth David in Cheshire, Conn…. My dad passed the cantoring torch to me… I love all that music, in particular [Robert] Lewandowski’s majestic [synagogue] pieces.” In February, Helfer will be artist-in-residence in Ohio, at the Dayton Opera. Her great-grandmother, who fled Lublin, Poland, at the turn of the century, spoke Yiddish; her parents and grandparents were born in America.

Unlike many of G&S’s other works, “The Yeomen of the Guard” (or “The Merryman and His Maid”) is set in a historical time period, the Tower of London during the reign of King Henry VIII. It tells the story of a falsely accused prisoner and two girls who love him (Helfer’s Phoebe is one of them). It is directed by founder/ artistic director/general manager Albert Bergeret, as was this season’s production of “The Mikado,” with its contemporary rendition of the executioner’s patter song, “I’ve Got a Little List” (also known as “As Some Day It May Happen”).