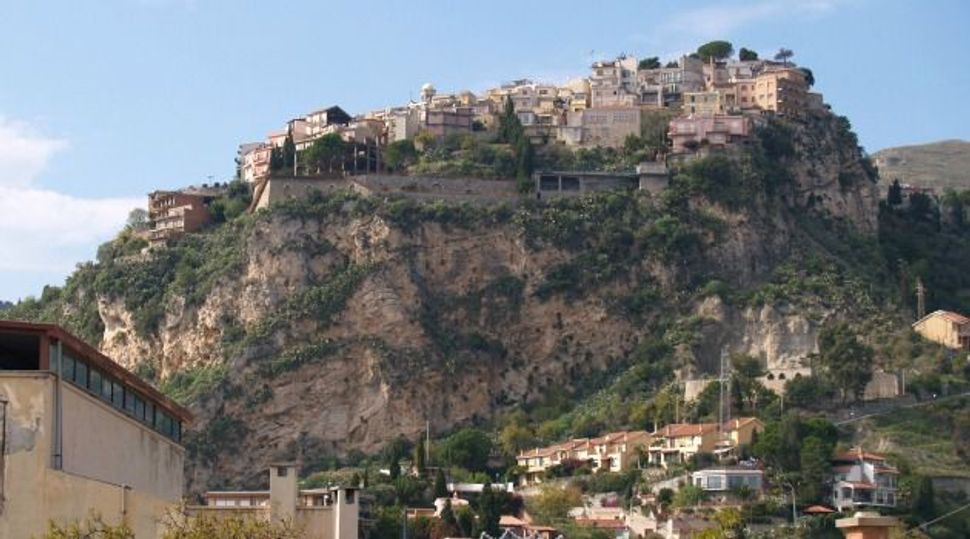 City on a Hill: Castelmola, a tiny municipality perched above Taormina, in Sicily, has many signs of long-forgotten Jewish life. Image by Arnoldius/Wikimedia Commons

When my Sicilian father-in-law converted to Judaism at the age of 60, he said he felt “a strong pull toward home, as if I always had a Jewish soul.” Several years earlier, Joe had survived colon cancer and several complicated surgeries. His long recuperation gave him time to read, and to think.

His second wife was Jewish, and Joe was curious about her religion. He began to pore over books about Jewish life, culture and history. He mastered Hebrew, studied Torah, gave up shrimp marinara and other dishes he’d adored, and insisted that his wife establish and keep a kosher home.

Eventually, Joe became chairman of the ritual committee. He was also the gabbai, assisting congregants at the bimah in his synagogue. He wrote a letter to his three children about his conversion. “I had no focus before, no compass spiritually,” he explained; the Catholicism of his childhood had little impact on him.

Looking back, it’s easy to see that Joe was exposed to elements of a Jewish past, although he didn’t know it at the time. He was 11 years old when he and his family left Castelmola, a small town above Taormina, but he never forgot a peculiar ceremony he watched on Friday nights: The priests would exit the old church carrying large and beautiful silver “relics” — which I would later learn were likely Torah embellishments — on pallets, and reverently parade them around the courtyard.

The procession moved solemnly, as the priests recited unintelligible, prayerlike words. “Nobody knew why they did this, but we knew it was important,” Joe said. Furthermore, his mother’s family history is murky and mysterious: His mother had been a foundling left on someone’s doorstep in San Fratello, a Sicilian town that once had a Jewish population.

Five hundred years ago, about 40% of Sicilians and Calabrians were Jewish, according to Rabbi Barbara Aiello, the American-born founder of the Italian Jewish Cultural Center of Calabria. Tantalizing tidbits of what she calls “anecdotal evidence” persist today in subtle ways, often drawing the descendants of conversos — Jews who renounced their faith and adopted Christianity during the Spanish Inquisition — back to Judaism.

Jews probably came to southern Italy almost 2,000 years ago, especially around the time when the Maccabees, fearing annihilation by Antiochus’s forces, sent scouts in boats into the Mediterranean to search for new homes. In recent years, the “evidence” of their arrival in Italy has been resurfacing. The remains of a fourth-century synagogue were found in Bova Marina, in Reggio di Calabria, and a mikveh of similar age was uncovered in Siracusa, Sicily. The island, 9,925 square miles, is situated alongside ancient trade routes and the straits of Messina, and would have been a good location for merchants and traders, most likely including Jews. At least three vestiges of the past endure in 21st-century Taormina: a pedestrian shopping walkway called Traversa Degli Ebrei (Street of the Jews); a veterans hall with a three-sided second-floor balcony that suggests its probable history as a synagogue, and a municipal building with three plaster Stars of David prominently placed on its facade.

I thought about all this last summer, when I attended workshops on “The Archeology of Memory Reclaiming Hidden Sephardic Jewish Roots,” and “The Captives Return: B’nai Anusim (Children of the Forced Ones)” at the International Conference on Jewish Genealogy, held in Paris. As an amateur genealogist, I found the workshops intriguing. The speakers were Doreen Carvajal, an American journalist and author of “The Forgetting River: A Modern Tale of Survival, Identity, and the Inquisition,” and Jonina Duker, an educator and genealogist who is the main founder of the organization Kulanu, which reaches out to lost and dispersed Jewish communities everywhere.

Recalling my father-in-law’s reflections, I understood what Carvajal meant when she talked about “ancestral memories.” “The blood calls” is how Duker described Jewish souls finding their way back to the mainstream of the Jewish people.

The sessions also reminded me of the visit to Castelmola that my husband, sons and I made in 1990 and how startled we were to see leaded Stars of David in windows of the old church, which was about 800 years old. The leaded windows were set in stone panels on two sides of a bell tower.

Had this place once been a public building, or even a synagogue, in what had been the Jewish quarter? Later we would learn that when formerly Jewish structures were converted into churches or secular buildings during and after the Inquisition, superstitious inhabitants often preserved small signs of the past religion to guard against retribution (and soothe their guilt). Maybe it was bad luck to get rid of all the Judaica.

Carvajal — whose name in Spanish means “lost place,” or “rejected” — sought answers to timeless questions: “Who am I?” and “Where do I really come from?” Driven to find answers, she moved with her family to an Andalusian town where her ancestors had lived long ago. There she would uncover hidden, ghostly intimations of Jewish life that had been whitewashed but not obliterated entirely, and by doing so she would confirm her Jewish heritage. Subsequently, she was able to track her DNA and was stunned, but not surprised, to learn that it was linked to Sephardic Jews in Spain.

Identity is often complicated and foggy. My family members also wondered about their ancestry. Could DNA testing help us? In 2009, at a conference on Italian-Jewish genealogy held in Manhattan, speakers confirmed the merits of DNA testing when “the paper trail no longer exists.” Joe had questions, too; was he a Jew because he “felt” he was Jewish, or was it in his DNA? Was he descended from neofiti, as Italian conversos are called? As I watched my husband swab his father’s cheek for a DNA sample, I couldn’t help but think: Long ago, terrified Jews concealed their true identities to survive; now, our goal is to uncover them. A few weeks later, a DNA analysis confirmed that Joe’s haplogroup belongs to a significant number of Jewish men and is especially common among Sephardic Jews. We still don’t know for certain that Joe’s heritage is Jewish, but the test brought us much closer to believing it to be so.

During a break at the conference, my husband and I met Rabbi Aiello, and my husband mentioned his father’s recollections to her. “Did you say he came from Castelmola?” Aiello asked. “It was also my mother’s birthplace. She, too, would describe to me the silver brought out on Friday nights. I believe they were the ‘ribbones,’ the silver tops with tinkling bells that adorn the Torah, and also the breastplates — the decorations.” Smiling, she added, “You know, probably, that whole town was Jewish!”

Joe smiled, too, when we repeated her story to him. Now 102 years old, he enjoys looking at old photos of Castelmola. Home never changes, even if you, yourself, have changed.

Susan J. Gordon has just completed a memoir about her journey to uncover her own family’s Jewish history. She blogs at www.susanjgordon.com.