Jewish Big Easy’s Back — In Time for Super Bowl 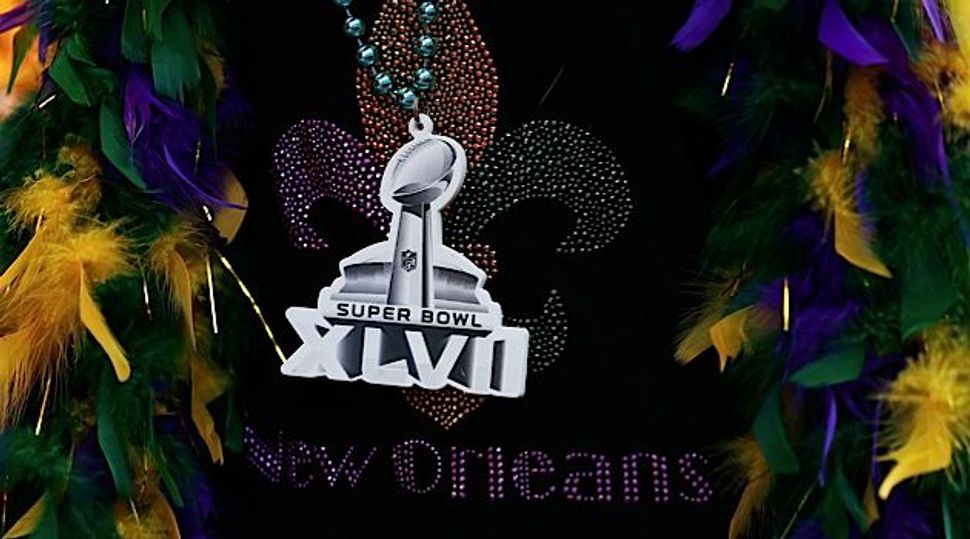 The Jewish Big Easy is back — and the Super Bowl proves it.

New Orleans Jews are eagerly trumpeting Super Bowl XLVII as a means to showcase their rebuilt community, almost seven and a half years after it suffered a devastating drop in population following Hurricane Katrina.

“We were impacted by Katrina just like everyone else,” said Rabbi Robert Loewy, of Congregation Gates of Prayer. “As proud New Orleanians, we are delighted to see the Super Bowl hosted here.”

Yossie Nemes, rabbi of the Chabad Jewish Center of Suburban New Orleans, said the big game is evidence that the Crescent City has come all the way back.

In fact, the population of Jews in New Orleans now is higher than it was before the storm, having gone from 9,500 then to 9,800 today, according to Michael Weil, executive director of the Jewish Federation of Greater New Orleans.

That represents a stunning turnaround. Weil noted that after Hurricane Katrina, some 3,000 to 3,500 of New Orleans’s were displaced. And an aging Jewish population threatened to decrease those numbers even greater in the years afterward.

“The city is really coming back in good shape; the Jewish community is strong now,” said Nemes. “The synagogues, Chabad, federations — everyone is positioned possibly stronger than before, and hopefully anticipating good times again.”

The biggest game in American sports will return to the Mercedes-Benz Superdome on February 3, for the first time since 2002. Nemes said his phone has been “ringing off the hook” with calls from Jews in Baltimore and San Francisco since the conclusion of the conference championship games January 20, which saw the San Francisco 49ers and the Baltimore Ravens punch their tickets to New Orleans. Callers are inquiring about Jewish life in the city, said Nemes, and he has been helping prospective

visitors locate kosher restaurants and lodging, as area hotels have been booked for months.

Michael A. Bernstein, who became senior vice president for academic affairs and provost at Tulane University in 2007, arrived in the city two years after Katrina when there were still “FEMA trailers everywhere,” he said. Bernstein hailed the return of the game as “a moment of pride” and “a symbol of our resilience, rebirth and revitalization overall.”

Thousands of Jewish volunteers arrived to help with the city’s rehabilitation after the storm, and hundreds of them stayed behind, drawn to an accessible Jewish life and to the city’s own brand of eccentricity.

Rabbi Yonah Schiller, executive director of Tulane’s Hillel, said he moved to the city in 2008 because it held tightly “to its rich unique culture while setting out to reimagine and reinvent what it wanted to be, as it transitioned from recovery to renewal,” a process he termed “very Jewish.” Schiller said New Orleans leads the country in startups-per-capita and is among the highest-ranking metro areas for employment growth. “The Jewish community has been part of that process,” he said.

Adding to the enticement of settling down in the Big Easy were grants and complimentary memberships to local synagogues and organizations, offered by the local federation.

“It’s a very different profile of people moving here,” said Weil, who noted that local Jews have established jobs ranging from lawyers to artists who use recycled glass to create instruments. “There’s something rather unique, special and quirky about New Orleans that draws people to move here,” he said. “They love the music, the food, the architecture, and in New Orleans there is in fact a large Jewish singles scene.”

The Super Bowl will also bring a boost to Jewish businesses. Linda Waknin, chef and owner of Casablanca Restaurant, a local kosher eatery, said she has already received requests to cater to religious groups and fans who will be attending the game or hosting parties. Joel Brown, who 25 years ago opened the Kosher Cajun New York Deli and Grocery, said

the game’s arrival has led to an improved infrastructure, including fixed roads and trolley car line extensions.

New Orleans Jewish residents were excited at the economic boon expected from the game. According to a recent report by CBS, the NFL has said the Super Bowl can generate at least $300 million Super Bowl in revenue for a host city.

The arrival of the Super Bowl has, among other things, enabled local organizations to use the game as a fundraising tool. The Chabad Jewish Center of Suburban New Orleans is holding a Super Bowl pool, which is expected to raise $3,600.

A majority of Jews in New Orleans are — like other residents — fans of the New Orleans Saints. But they were still excited about the game. Meredith Grabek, a manager at the local federation, will volunteer in Super Bowl activities. Other prominent Jewish families were on the committees and boards responsible for bringing the game back to the city for the first time post-Katrina.

Grabek, who originally is from the Boston area, moved to New Orleans in 2008 to help Avodah: The Jewish Service Corps. She said that while the Jewish community is excited for the event and has begun to thrive in recent years, the game could also bring attention to neighborhoods in the area that are still struggling to recoup.

Others are using the Super Bowl week to show the extent to which New Orleans Jews are driving issues in the community and beyond. Schiller and the Tulane Hillel hosted the second of their “The Big Issue” panels, which examined major issues facing the National Football League and featured journalists from The New York Times and NPR, and NFL Players Association executives. Their first panel, focusing on politics, featured former Louisiana governor Buddy Roemer and MSNBC’s Melissa Harris-Perry.

According to Stuart Rockoff, a historian at the Goldring/Woldenberg Institute of Southern Jewish Life, the first Jews arrived in New Orleans in the 18th century, despite French colonial laws that excluded Jews from Louisiana. The first congregation, Gates of Mercy, was built in 1827. Rockoff noted that Jews have always been tied into the broader community: In fact, members of Gates of Mercy, who often inter- married, were allowed to bury their spouses in the congregation’s cemetery.

Elite social clubs in the area did occasionally exclude Jews. But New Orleans Jews have long felt a connection with the city and as a result have been a driving force in its philanthropic scene.

Jewish Big Easy’s Back — In Time for Super Bowl