What Happens When Jewish Law Hampers the Disabled? 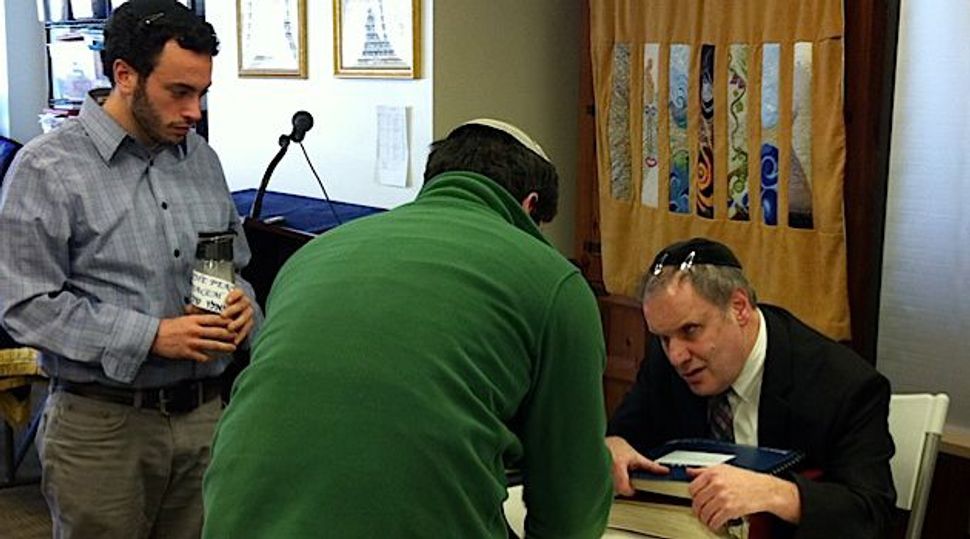 Blind Faith: Rabbi Michael Levy, right, who is blind, chats with yeshiva students about the halachic challenges of incorporating Jews with disabilities into traditional rites. Image by Anne Cohen

About 10 years ago, Jason Lieberman stopped wearing tefillin. This was not an act of rebellion — Lieberman’s cerebral palsy simply made it too difficult for him to put them on.

Seven years later, Lieberman, 34, who serves as treasurer of Matan, which provides Jewish education programs to special needs children, sought help from his extensive network in the Jewish community: Where could he find an occupational therapist who had experience in training disabled Jews to put on their own tefillin?

The answers disappointed him. Two rabbis offered to give him a heter — a dispensation — so that he wouldn’t have to wear tefillin at all. Another suggested that he get someone else to put them on for him.

That was exactly what he was trying to avoid. “I know I have the skills to do it,” Lieberman told a rapt audience of rabbinical students January 22 at Yeshivat Chovevei Torah, in New York. “I just need someone who understands how my body works, to teach me how to do it.”

Now, imagine that you, dear reader, are a rabbi, and a deaf congregant of yours dies. During a shiva visit you attend, several of the deceased’s friends and family members who are also deaf take part in the mourning minyan; so do two Hasidic-looking men from the neighborhood, who are kind enough to come at the last minute to ensure the 10-man quorum a minyan requires.

Suddenly, the alarmed Hasids notice that two of the other men are signing to each other. According to their strict interpretation of traditional Jewish law, or Halacha, this service is not kosher: Deaf men cannot be counted. They remain silent when the other worshippers respond to the dead man’s sons during their recitation of the Mourner’s Kaddish, preparing to leave instead. But that would bring the number of worshippers down to eight, meaning the mourners could not recite the required prayers comunally, something that can only be done with a minyan.

You are this family’s rabbi. What do you do?

Click here to read “You’re the Rabbi; What Would You Do?

Those two types of presentations — the voices of disabled individuals themselves, and hypotheticals on the disability-related dilemmas that Orthodox rabbis must be ready to face — highlighted a recent four-day training program for rabbinic students, sponsored by YCT and its sister school for female scholars, Yeshivat Maharat.

From January 22 through January 25, the students grappled with these issues, including the thorny hypotheticals, which they discussed in small study groups during the course of the week. But even after hearing from disabled Jews themselves, some students, when required to present their conclusions on the hypotheticals to a panel of experts on the last day, focused solely on the halachic implications of their assigned question.

“I’m a little blown away by this,” said Shelley Cohen, one of the panelists, to a group of such students. Cohen and her husband, Ruvan Cohen, funded the initiative, which takes place every two years, in memory of their son Nathaniel, who was diagnosed with Duchenne muscular dystrophy at the age of 6 and died five and a half years ago, at age 21. Speaking to one group bogged down in the minutiae of Jewish law, she exclaimed, “This is a Jew who wants to be a part of a community!”

That is the core idea that YCT’s dean, Rabbi Dov Linzer, and his colleagues want their students to have absorbed by the time they enter rabbinic life. These are not just abstract concepts; they affect real people who are often in pain, and embarrassed.

The students confronted concrete and practical questions, some of which explored the tensions between halachic strictures and contemporary ethics from a pastoral perspective:

Can a non-Jew be hired to caption a Sabbath service that is to be projected on a screen for hearing-impaired worshippers? What about a system that would do this automatically for words spoken into the system’s microphone?

What do you tell a disabled Jew who is concerned that the cane she needs in order to walk to synagogue during the Sabbath violates the prohibition on carrying items? What about a wheelchair? And can her husband push it without violating the proscription against work? If that’s a problem, what if the wheelchair is motorized with a pre-charged battery? Will she be violating the Sabbath ban on electricity?

What do you tell a yeshiva graduate who served in Afghanistan and lost his left arm to a landmine when he asks you: “Rabbi, I want to put tefillin on again. What do I do?” As a right-handed person, he is ordinarily obliged to wrap the tefillin straps on his left arm and hand. But even more fundamentally, as a one-armed man, how does he put them on at all?

Haggai Resnikoff, a student grappling with one of the hypotheticals — a blind woman who brings her seeing-eye dog to the sanctuary on the Sabbath, upsetting some of the other congregants — said succinctly, “You need to be considerate of her needs before even considering the halachic issues.”

One way of doing this is to get the community involved, said Esther Altmann, a Manhattan psychologist who sat on the panel of experts that heard the students’ presentations. “Anything that’s different will make people retreat into, ‘This isn’t how it’s supposed to be done,’” Altmann said. The important thing, she stressed, is to press on. “The conversation has to shift to, ‘Of course there’s a way we can figure this out.’”

Halachic legal issues aside, there are daunting physical obstacles, too. Including the disabled in synagogues, schools and camps involves issues that those who are not disabled often fail even to see.

Levy was one of three speakers with disabilities who sought to convey to the students their experiences in the Orthodox community. Rachelle Landau, who is deaf, spoke of the dearth of interpreters of American Sign Language in synagogues. “I have been told that there is no money for an interpreter,” said Landau, who works for Our Way for the Deaf and Hard of Hearing, a program of the Union of Orthodox Jewish Congregations of America.

Landau, who signed her own talk and used an interpreter to translate it to the audience, told the students that this was just the beginning of the problem. Even when there are interpreters available, “what do you do for separate seating?” she asked. Often, said Landau, she does not attend Orthodox synagogues because she cannot see the interpreter from the women’s balcony. “Would you allow men and women to sit together if there’s no other way?” she asked.

Linzer said the problem is frequently one of awareness. “We don’t realize how many things we’re not doing,” he said.

Lieberman, the man with cerebral palsy who wanted to put on his own tefillin, related a meeting he had with a rabbi who told him he was willing to accommodate disabled people, but said he didn’t have any in his community. Lieberman suggested that this might have something to do with the number of steps leading up to the synagogue door. The rabbi was aghast. “I didn’t even realize there were 25 steps,” he said.

This was an eye-opening experience for Lieberman, who told the audience: “I see one step, and it feels like six steps. It was the first time I realized that people who do steps well don’t realize they’re going up steps.”

Shelley Cohen hopes to bring similar programs to other rabbinical schools through the Jewish Inclusion Project, of which she is the founder and director. “We really need rabbinical leadership,” she explained.

Until now, most of the initiatives for change have come from disabled people themselves, or from their families, said Cohen, who described herself as the “mother of a Jewish person who just happened to be in a wheelchair.” Cohen said she knows firsthand the struggles that people with disabilities and their families face to feel like they are a part of the Jewish community.

YCT, which stands on the left wing of Orthodoxy, has been unusually open to engaging the issue of inclusion, including its halachic challenges.

Agudath Israel of America, on the right wing of the Orthodox spectrum, favors a strict, sometimes less flexible adherence to Halacha. Sometimes, there is no leniency to be had. “There are in fact halachic ‘brick walls’ where what a person might deeply desire simply can’t be obtained,” said Rabbi Avi Shafran, the Aguda’s director of public affairs.

Shafran did say that if a rabbi knows of opinions within Halacha that differ from his own, that rabbi is obliged to inform the person consulting him and allow that person his own choices.

Rabbi Mordechai Shuchatowitz, rabbi of the Agudath Israel congregation in Greenspring Md., and father of four children who are hearing-impaired, agreed. “Halacha gives us direction to deal with whatever situation we’re in,” he said. “[It] doesn’t always have to be restrictive.”

But in those cases where a request simply isn’t possible, it is up to the rabbi to say no, he said. “We are observant on a consistent basis,” Suchatowitz said. “We are compassionate but we’re not going to change the Halacha for them.”

According to Cohen, one thing these different schools of thought do share is blame for the current situation. “All the denominations share this problem of not doing inclusion properly,” she said. “If we don’t include everyone, we include no one. It says in the Torah, ‘Teach your children.’ There’s no fine print in there that says only the perfect ones.”

What Happens When Jewish Law Hampers the Disabled?