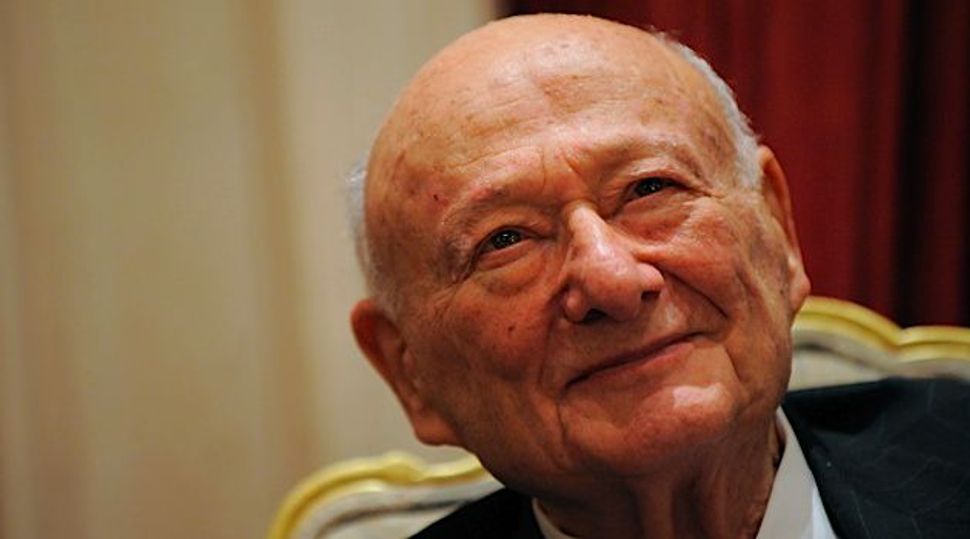 We Remember: Edward Irving Koch, New York City?s mayor for 12 years, was a legend in his city. Image by Getty Images

Edward Irving Koch, New York City’s long-serving, charismatic, controversial 105th mayor and arguably the most visible American Jewish official of his day, passed away this morning at age 88 from congestive heart failure. His three epitaphs, chosen several years before his death, expressed the centrality of Judaism to his identity.

The first quotes the murdered journalist Daniel Pearl “My father is Jewish, my mother is Jewish, I am Jewish.” The second, is the Sh’ma, and the third, which the mayor wrote himself after suffering a stroke in 1987, reads: “He was fiercely proud of his Jewish faith. He fiercely defended the City of New York, and he fiercely loved its people. Above all, he loved his country, the United States of America, in whose armed forces he served in World War II.”

Interviewed by The New York Times in 2009 about his future grave, the famously ebullient Koch proclaimed: “It takes up the whole stone!”

Born in Crotona Park in the Bronx in 1924, Ed Koch was the second of three children of Louis (Leib) Koch and Joyce (Yetta) Silpe Koch, both Galitzianer garment workers, Koch grew up in Newark and Brooklyn and attended City College. Over six feet tall, and eager to fight Hitler when he was drafted in 1943, he concealed a serious hand injury in order to serve.

That didn’t prevent him from boxing a bully during basic training. He lost the fight, but put an end to the numerous anti-Jewish remarks he and fellow Jews had endured during basic training. It was the beginning of a lifetime combating anti-Semitism. He eventually joined the 104th Infantry Division, and fought against the Wehrmacht in the Netherlands, Belgium and Germany in the spring of 1944. He broke his leg during the occupation of Aachen, an injury that got him sent home — a stroke of luck, as his unit sustained heavy casualties during the Battle of the Bulge a few weeks later. Sgt. Koch returned to Europe in 1946, charged with de-Nazifying a small village in Bavaria, his first experience with municipal administration.

Returning to New York City in 1946, Koch, who had not finished his bachelors’ degree, talked his way into NYU Law School and passed the bar in 1949. Still living with his parents, Koch was a member of the Flatbush Jewish Center, a Conservative synagogue, and active in the Young People’s League, the predecessor of the United Synagogue Youth.

He moved to Greenwich Village in 1952, and joined the reform Village Independent Democrats (VID) in 1958, after a flirtation with more mainstream politics. The VID succeeded in beating Tammany leader Carmine G. De Sapio for district leader in 1961. When De Sapio attempted a comeback in 1963, Koch narrowly defeated him. Two years later, Koch endorsed Republican John V. Lindsay for mayor, unheard-of for a Democratic district leader. Koch won election to the New York City Council in 1966 and to Congress from the East Side and Greenwich Village, on a strong anti-Vietnam war platform, in 1968.

During five terms in Congress, Koch compiled a strongly liberal voting record but a centrist style, assiduously courting the friendship of conservatives. Popular among his colleagues, he obtained a seat on the powerful Appropriations Committee, giving him national stature in the Jewish community as a key supporter of Israel. He travelled many times to the Middle East, met every Israeli prime minister, and became a dedicated Zionist.

Koch won a dark horse campaign for the mayoralty in 1977 by emphasizing his “competence,” and his support for the death penalty. He characterized himself as “a liberal with sanity.” He gained national attention by handing President Jimmy Carter a letter criticizing the president’s Middle East policy.

Koch’s first term (1978-1981) was spectacularly successful. He took back Democratic control of a city government that for the past three years had effectively been run by a committee of the city’s creditors. On his first day he issued an order banning discrimination by the city on the basis of sexual orientation. Though unable to restore city services to pre-austerity levels, he improved management. And he depoliticized mayoral appointments to municipal courts, by creating an independent screening panel that suggests candidates to the mayor.

Koch also persuaded Congress, against all predictions, to extend long term loan guarantees to New York City — a “bailout” that made it possible to put New York back on a firm financial footing. And he restored the city’s credit by balancing the city’s budget earlier than expected. Koch won reelection overwhelmingly in 1981, running as the candidate of both the Democratic and Republican parties, a result of his friendly relations with President Ronald Reagan.

Despite all that bi-partisan support, adoration of Koch was not universal. Koch appealed to white voters by showing a strident refusal to compromise with representatives of poor black communities, and particularly the political leadership of Harlem. His decision to close Sydenham Hospital in 1980, while sound on management grounds was (as the mayor admitted years later) politically tone deaf, and earned him condemnation even from moderate African American leaders such as Rep. Charles Rangel, who compared Koch to the infamous segregationist sheriff Eugene “Bull” Connor.

At the end of his second term Koch announced a ten-year multi-billion housing program, using local sources of money, to rebuild neighborhoods that had been damaged by fire and abandonment. The program, continued since by subsequent administrations, has been a major success. As a result, New York’s most devastated neighborhoods were largely rebuilt by 2001.

His third term as (1986-89) was tough by any standard. Though his own integrity was never in question, he faced a brace of scandals, increased homelessness, thousands of city residents dying of AIDS, the crack epidemic, and a 1987 crash on Wall Street. Nonetheless, Koch continued to govern during this period with major initiatives on gay rights, City Charter reform, implementation of his housing plan, and civilian review of the police.

Koch’s brash personality got him into huge political trouble when he declared on television during the 1988 presidential race that Jews “would have to be crazy” to vote for progressive presidential candidate Jesse Jackson because Jackson might jeopardize American support for Israel. But it was the murder, just two weeks before the 1989 mayoral primary, of Yusef Hawkins, a sixteen year old who had gone to the Bensonhurst section of Brooklyn, that led to Koch’s defeat by David Dinkins in 1989.

Koch bounced back from the defeat. He made a fortune from television deals, and mended fences with ancient political opponents. And he developed an uncanny knack for throwing himself into numerous political contests, supporting candidates of either party where his endorsement both made a difference, such as Hillary Rodham Clinton for the Senate, or more recently Rep. Bob Turner (R-Queens) in a special congressional election.

Ed Koch remains one of America’s best known Jewish politicians., and left an important though controversial legacy as mayor. Although he could not reverse the damaging effects of the period of austerity from 1975-1982, Koch created many of the basic structures necessary to the city’s eventual recovery. Which is why Mayor Michael Bloomberg renamed the 59th Street Bridge “The Ed Koch Queensborough Bridge” in his honor, the only time a bridge was named for a then-living person. His legacy spans the boroughs, and the generations.