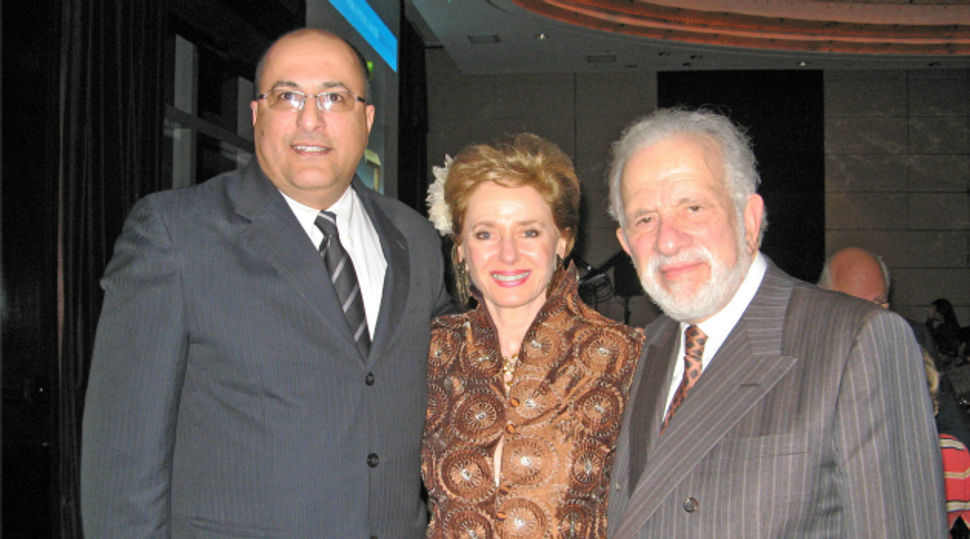 “A win-win situation in politics in Israel means I win twice!” joked Ido Aharoni, Israel’s consul general in New York, at the January 24 Bezalel Academy of Arts and Design gala that honored financier, philanthropist and renaissance man extraordinaire Leonard Polonsky. Surprising the 250 guests at the Mandarin Oriental hotel, Aharoni hailed actor-provocateur Sacha Baron Cohen as a model for Israel’s public image rebranding. “He taught us in the Israeli Foreign Ministry a hugely important lesson,” Aharoni said. The audience roared. “I’m deadly serious,” he continued. “Sixteen years ago, Sacha Baron Cohen said to himself, ‘I’m going to take a real nation with a real history, real territory, a political system, and I am going to redefine its identity singlehandedly in a way that even the Kazhakis will not recognize their nation.’

“So what has the movie ‘Borat: Cultural Learnings of America for Make Benefit Glorious Nation of Kazakhstan’ to do with us? It was not even shot in Kazakhstan, but in Romania. The language he used was half Hebrew, half gibberish. He never set foot in Kazakhstan, [yet] he is the world’s most famous Kazhaki. It’s that the Kazakhis did little to define who they were to the world. And the people from the Bezalel School of Design [in Jerusalem] know that in branding and marketing, if you do not define your brand’s identity to the world, rest assured, the competition will do it for you. For many years, we Israelis, with the help of our well-wishers in the Jewish world, did just that. We defined Israel to the world only in terms of Israel’s problems, issues and weaknesses — totally neglecting the assets that we have. I believe that Bezalel is part and parcel with Israel’s national security.”

Among the innovative designs and award-winning products developed by Bezalel’s students was the earthquake-safe school desk. Designed by Arthur Brutter, a student, and Ido Bruno, an instructor, the product is now in the permanent collection of the Museum of Modern Art. A video showing various heavyweights being dropped on the desk — first a half-ton block, then a huge sack weighing 800 kilograms and then a block weighing a ton — under which two children can remain unharmed elicited gasps from the guests. The voiceover noted that “along geological rift lines, 300 million schoolchildren are constantly exposed to great danger in case of an earthquake. Existing school desks turn into lethal traps…. The desk is light enough for two children to carry and lift. By lining up the tables together, [they] create a passageway for rescue teams’ accessibility in case of disaster. This offers corridors of escape.”

Ilan Kaufthal, chairman of Friends of Bezalel, introduced honoree Polonsky as “a Jewish kid from New York, Phi Betta Kappa at 18, military service… [who taught at] Oxford, the Sorbonne, Heidelberg, Harvard.” He also noted that Polonsky built a very highly successful financial services business and went on to become a major philanthropist for institutions and causes around the world. Accepting the Blanche and Romie Shapiro Award for Outstanding Service to Bezalel, Polonsky responded modestly, “I went to an unusual New York public high school [Townsend] that told young people that there is a big world out there and you’d better make a difference.” Polonsky warmly lauded his wife, Georgette Bennett, president and founder of the Tanenbaum Center for Interreligious Understanding.

Introducing Bezalel’s “brand new” president, Eva Illouz, as “the first woman to head Bezalel in its 106-year history,” Kaufthal said, “I think it’s about time.” Born in Fez, Morocco, raised and educated in France and then in Israel and the United States, Illouz is author of a number of books, including “Why Love Hurts: A Sociological Explanation” (Polity, 2012) and “Oprah Winfrey and the Glamour of Misery” (Columbia University Press, 2003).

“I was thinking about the elections in Israel,” Illouz said. “When you are close to the news, it seems as if the elections are the most important things that can happen to a country. Of course, in a way it is; however, when you think of history, I am more likely to remember or know about El Greco than about the particular family that was ruling over the republic of Venice when Greco was painting. Or, when you think of the Parthenon, you are less likely to know about Pericles, the political leader who first initiated the building the Parthenon. So… what Bezalel represents is not only the best school of art and design and architecture in Israel and in the Middle East — and one of the best, I think, in the world — but it represents the forces of the good, which will make Israel remembered beyond political factions that are dividing it today.”

“I am very happy,” Tovah Feldshuh said when she called me out of the blue. At breakneck speed, she informed, “I’m in New York, and I seem to have an assignment to unearth the rare and the beautiful.” “What are you talking about?” I asked Feldshuh, whose past tour de force performances included morphing into Golda Meir in “Golda’s Balcony” and into Irena Gut Opdyke, a Polish Christian rescuer during World War II, in “Irena’s Vow.” She went on: “On February 7, 8 and 9, I’ll be starring in ‘Tovah: On and Off and Now Under Broadway’ at 54 Below, [the former] Studio 54, where in 1974 I had my first starring role.” Without skipping a beat, she continued: “I’m starting rehearsals for “Two-by-Two,” a musical by Richard Rodgers, Peter Stone and Martin Charnin, opposite Jason Alexander, on Monday, February 11, at York Theatre, directed by Martin Charnin. I did ‘Covert Affairs,’ a series for the USA channel, in which I played head of the Mossad and had to do two scenes in fluent Hebrew. My accent was better than Golda’s. If they had asked me to do my Haftorah, I would have been fluent, but conversational Hebrew?! Forget about it.” She took a breath, and then said, “Gotta go!” and we both hung up.