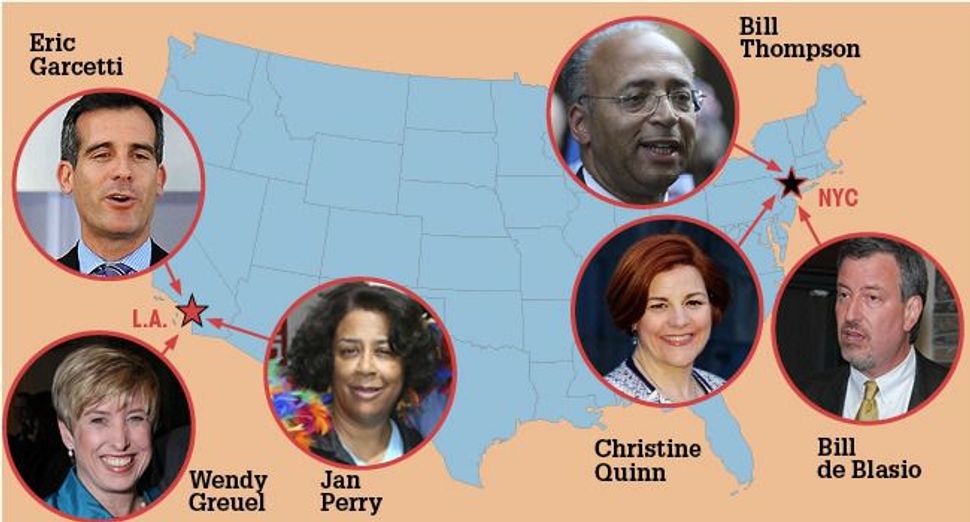 New York City and Los Angeles will both elect new mayors this year. One city will likely pick a Jew. The other will not.

Think you know which city is which?

New York seems primed for another Jewish mayor. Three of the past five have been Jewish, including the current mayor, Michael Bloomberg, and the recently deceased Ed Koch. Nearly every mayoral race in recent memory has included a Jewish candidate. This is New York, after all.

Yet in 2013, not a single one of the handful of front-runners vying to replace Bloomberg is Jewish.

Los Angeles, meanwhile, has had plenty of Jewish elected officials, but never a Jewish mayor. Now, both of the leading candidates for the office are Jews. Another top contender is married to a Jew and says she herself is interested in converting.

So are the Jews of New York losing their touch? Is the weight of Jewish political power shifting west?

“Some of it is simply quirky stuff,” said Raphael Sonenshein, a political scientist and executive director of the Pat Brown Institute at California State University, Los Angeles.

New York City’s mayoral race, for instance, would have looked rather different had former congressman Anthony Weiner not accidentally Tweeted a close-up photo of his briefs (with him inside them) in June 2011.

“That there is no Jewish candidate in this particular race is more a consequence of personal behavior on the part of the potential Jewish candidate than anything else,” quipped Flora Davidson, a professor of political science and urban studies at Barnard College, referring to Weiner, who resigned from political life and abandoned an expected mayoral bid shortly after distributing the photo.

In L.A., however, it’s not just coincidence at play. There, the high visibility of Jews in this election cycle in fact reflects the power of the city’s Jewish community as a voting bloc.

Jews make up just 6% of the population of the City of Los Angeles, compared with 13% of New York’s. Jews in L.A. vote, however, at rates that more than double their political influence relative to their size. That’s still a small bloc. But unlike in New York, L.A.’s primaries are wide-open, nonpartisan races in which parties play relatively minor parts. This allows well-organized minority ethnic blocs to exercise their clout more directly, without the mediating ethnic considerations the Democratic Party weighs when meting out electoral offerings.

“Because the system is not cluttered up with parties and boroughs and the deep, deep political organization culture that New York [has], a few groups, if they vote in large numbers, can be very significant,” Sonenshein said.

According to Sonenshein, Jews in L.A. are the fourth most important ethnic bloc in the city, after Latino, Asian-American and African-American voters. They also have a history of forming powerful electoral coalitions with other minority groups.

That means that the Jewish vote in L.A. could be key to putting together a winning coalition. The Jewish bloc was originally expected to go to Zev Yaroslavsky, a county supervisor and high-profile L.A. politician who is highly identified with the Jewish community. Yaroslavsky, who was born in L.A., was widely considered to have a serious shot at the mayoralty if he chose to run this year.

In the end, Yaroslavsky stayed out. That left the Jewish vote wide open.

Two candidates with nontraditional Jewish backgrounds currently lead the L.A. race. Both have played up their Jewish credentials in their campaigns.

Even candidates with more tenuous Jewish ties have tried to cash in. Mayoral candidate Wendy Greuel, the city controller, is married to a Jewish man. Last January, Greuel told L.A.’s Jewish Journal that she “would like to” convert to Judaism.

“I believe in the Jewish tradition and religion,” the newspaper quoted her saying.

Meanwhile, on the other side of the country, the fact that no New York Jews are expected to win the race for mayor hasn’t stopped the candidates from making aggressive plays for their loyalty.

Just as Yaroslavsky was expected to take the Jewish bloc in L.A. if he chose to run, Manhattan Borough President Scott Stringer would have laid claim to a wide swath of the Jewish vote if he had stayed in the race. Instead, Stringer chose to run for city comptroller, a contest he’s expected to win.

There actually is one Jew in the New York City mayoral race. Tom Allon, a newspaper publisher, is running for mayor as a Republican, though his lack of name recognition makes him a long shot.

Democratic primary candidates such as Christine Quinn, Bill de Blasio and Bill Thompson have already been photographed with Jewish leaders and appeared at Jewish events all over the city. But in New York, their efforts to win the Jewish vote are complicated by a communal diversity not seen in L.A.

Appealing to New York’s Jews means reaching out to ultra-Orthodox leaders in Brooklyn and to secular liberals on the Upper West Side, to pick two of the scores of Jewish subcommunities throughout the city.

In past electoral cycles, Jewish leaders have worried that demographic shifts within the Jewish community, particularly the growth of the community’s conservative Russian-speaking and ultra-Orthodox segments, is breaking up that Jewish bloc. That hasn’t yet happened, at least in mayoral races. Jews have largely voted together in all recent mayoral elections but the 2001 race, when the community split between Republican Michael Bloomberg and Democrat Mark Green, both of whom are Jewish.

“Jews want to be viewed as a bloc, even when they don’t like each other,” said Ester Fuchs, director of the Urban and Social Policy Program at Columbia University’s School of International and Public Affairs.

Seeking access to needed services, Brooklyn’s Orthodox Jews look to support front-runners in local elections and eschew ideological concerns. That often brings them in line with secular Jewish liberals, who favor candidates pushing social programs. “Consequently, when you look at local elections, the ideological differences among Jewish voters are not as significant as they would be in a national election,” Fuchs said.

The lower and middle ranks of city politics are full of ambitious young Jewish officials, like Julie Menin, a candidate for Manhattan Borough President, and City Councilman Brad Lander. It’s clear that the current dearth of Jewish mayoral wannabes is not a long-term condition.

In L.A., however, despite the current bumper crop of Jewish mayoral candidates, the trend is actually moving in the opposite direction. The number of Jews in city offices there is actually declining.

“While three major candidates have connections to the Jewish community, it’s actually in the context of declining Jewish representation in the assembly, the state Senate, the city council,” Sonenshein said. He noted that the number of Jews representing L.A. in those bodies is “well below the high-water marks of 20 years ago.”