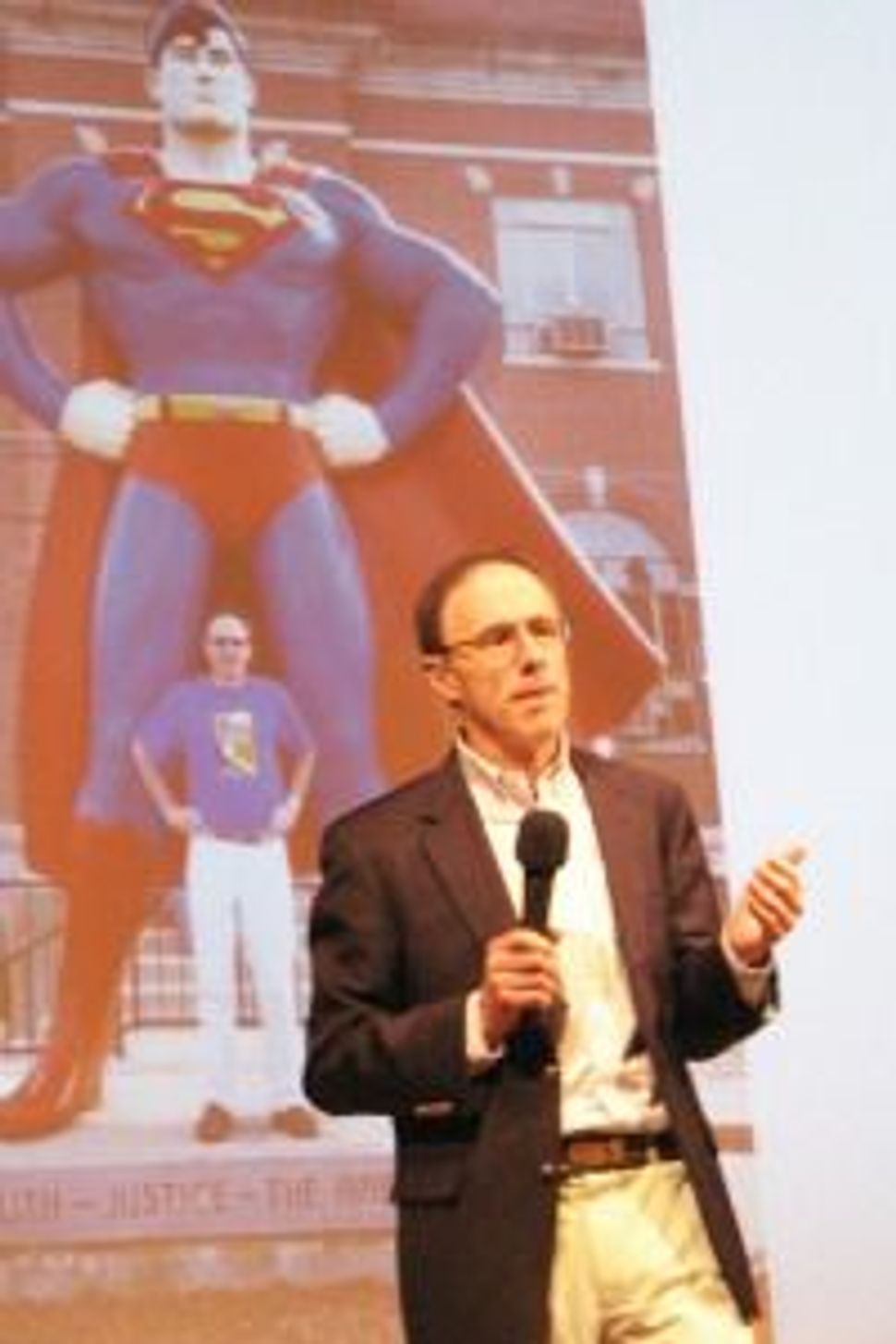 Larry Tye at ?Superman at 75? Image by Karen Leon

On January 27, Superman fans—many sporting Superman logo T-shirts—landed on Krypton, also known as the Center for Jewish History for a celebration of the 75th anniversary of the creation of Superman. 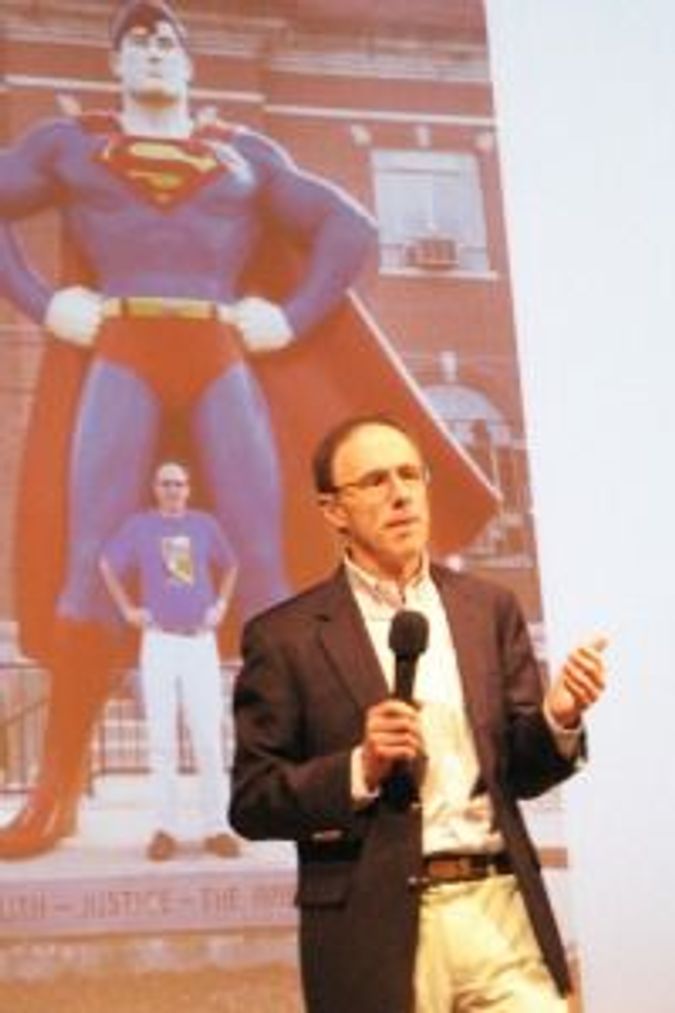 Larry Tye at ?Superman at 75? Image by Karen Leon

All were eager to hear Larry Tye, author of “Superman The High-Flying History of America’s Most Enduring Hero,” expound on the comic book hero’s true identity. Standing in front of a photo of the 12 foot tall bronze statue of Superman in Metropolis, Indiana, Superman’s “hometown” on planet Earth–Tye proclaimed: “Today we celebrate…and explore, what I am told is unequivocally the truth of the Jewish origins of the greatest superhero that has ever been created.” The full house roared. “Superman first came to us in 1938,” he continued. “America was mired in a great depression. And what we needed was a character that was a lot like FDR—a butt-kicking New Deal Liberal. And that’s what Superman was. There was no question who he was voting for, what his politics were.”

Tye talked about Superman’s creators, Joe Siegel and Jerry Shuster. Siegel was the youngest of six Lithuanian immigrant children; his father, Michael Siegel, died of a heart attack after chasing thieves from his haberdashery store. He was bullied and taunted as a child. “How do you fight against bullies? You create your own bully,” Tye said. Siegel shared his idea with Shuster, who drew a picture of a “hero swooping in to save a man – metaphorically Siegel’s father.”

“Every faith on this planet thinks Superman is theirs,” continued Tye. “There is a book, ‘The Gospel According to Superman’. If you were to Google ‘Buddhism,’ you would find treatises on the Zen of Superman. The Atheists say ‘Who needs religion, who needs God?’ Superman is the perfect secular Messiah. But I am here to tell you that Superman is, in fact, one of the chosen people!” and with that, Tye took a deep breath and ripped open his shirt to reveal a blue undershirt with the Superman logo inside a Star of David.

Tye said that the explosion of Planet Krypton from the Superman tale is partly based on the Genesis story, and partly a reflection of what was happening in the lives of Superman’s Jewish creators, Siegel and Shuster. “The world their parents had left behind in Eastern Europe was being destroyed. Superman’s escape from Krypton was like the World War II Kindertransports [trainloads of children sent out from Nazi Europe].”

“We all know that Superman’s name was Kal-El and in Hebrew El means God. And what does Kal or Kol mean?” said Tye. Several in the audience called out: “the voice!” Tye then suggested, “when a name ends in ‘man’ it’s one of two things—either he is a super hero, or a Jew! Next time you look at Superman, pronounce it in the same tempo as Hoffman, Goldman.”

“But just look at the time,” chimed in Sam Norich, publisher of the Forward, and another panelist. “It’s the ‘30’s. Jews are in the crosshairs– targets of Father Coughlin’s fulminations on the radio, targets of Henry Ford’s fulminations in the Dearborn Independent. Described as a subversive element that brought foreign ideas to America, Jews felt like the bullied kid on the school play yard. What could they do against Hitler’s juggernaut?” Someone asked Norich whether “wearing glasses as does the character Clark Kent [Superman’s] a disguise or his persona.” Norich replied: “Look at the disguise! It’s that of a nebbish.” [laughter]. “No really!” he said. “Here is a guy who has no physical prowess, a semi-intellectual, a reporter—a Jewish stereotype!”

When asked why Superman lasted 75 years while other comic book heroes have come and gone, Jim Shooter, the former editor-in-chief of Marvel Comics, said: ”I think he is the greatest hero in the world.” Jenette Kahn, the former publisher of DC comics and the daughter of a conservative rabbi said: “I would say he was a super mensch because he represents our best selves…. That we can have compassion, ethics…. At DC Comics we were always true to the core of Superman, his Midwestern upbringing, his Moses story. He is very much like the sage Hillel’s saying: ‘If I am not for myself, who am I? If I am for myself only, who am I? If not now—when?’ That is really the core of Superman.”

Adding an “aha!’ moment that evening was David Weiss, whose athletic, well-built father Stanley Weiss was sketched by Joe Shuster in 1945 because he looked so much Shuster’s Superman. When Weiss held up the sketch Shuster had made of his father next to a photo of him, was clear how much the two looked alike. Weiss generously loaned the never-publicly-viewed Shuster drawings for the event. Also acknowledged was Paul Levitz, for 35 years as writer, editor and publisher of DC Comics. The event was co-sponsored by Columbia University Libraries. Superman birthday cake was served to all.