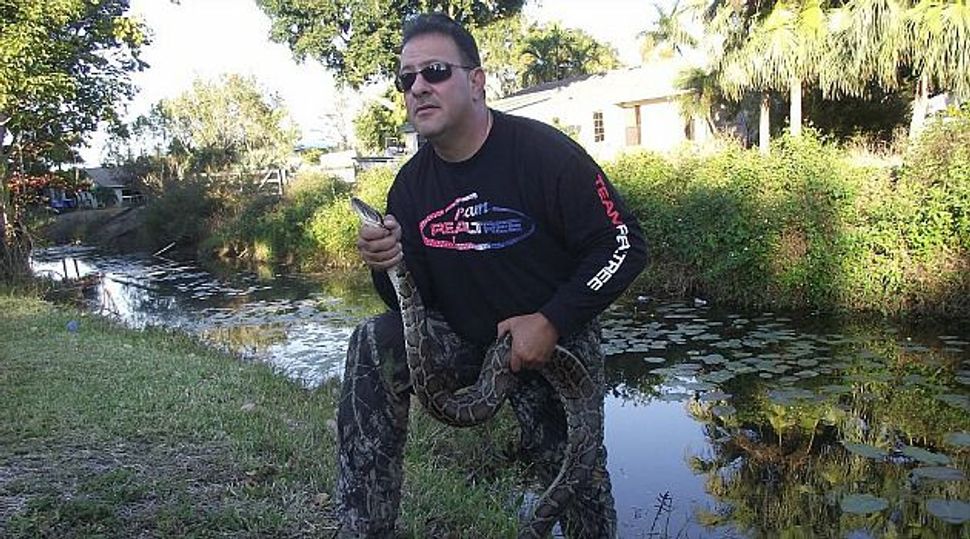 Culture Clash: Dave Leibman came in third in Florida?s Python Challenge. He boasts that he?s the ?only Jewish redneck? around. Image by courtesy of dave leibman

With pillowcases in tow, and bulky camouflage hunting boots on his feet, Leibman spent a recent day driving his pickup through the Everglades, hoping to nab a Burmese python, a species that can grow large enough to eat a deer.

“It makes a Jewish wife not very happy,” he said, referring to his use of linens to tote the snakes. “Pythons prefer a very high thread count.”

“I’m probably the only Jewish redneck you’ll meet,” he told the Forward.

Despite the culture clash, it was a typical day for Leibman during the Florida Fish and Wildlife Conservation Commission’s recent Python Challenge, a month-long competition organized to raise awareness of the state’s problem with invasive Burmese pythons. Originally imported as exotic pets, the snakes are now thriving in the Everglades at the expense of small mammals and other native species.

Leibman keeps a formidable menagerie of rescued animals at home in Weston, a Broward County suburb: four types of non-invasive snakes, wild chameleons, several dogs, a cat and a rabbit. He’s also passionate about raising awareness of the dangers of abandoning domestic animals.

“Unfortunately, people use the Everglades as a dumping ground for pets,” he said. “And in my book, that’s the biggest sin in the world.”

More than 1,500 people registered for the Python Challenge, which ran from January 12 to February 10. But unlike many competitors, who were granted temporary hunting access after completing an online training module, Leibman holds an official permit to capture the snakes year-round. He placed third in the challenge, with a tally of four Burmese pythons.

Even if snake-hunting seems like an unusual Jewish pasttime, Leibman could draw inspiration from the Scriptures.

In the Torah, after Moses’s staff is transformed into a snake, the Lord commands Moses to grab the creature’s tail. In one of the miracles showing that Moses is a true messenger of the divine, the snake turns back into a staff.

When Leibman grabs a Burmese python’s tail, he knows exactly what will happen: The animal will turn around and go into battle. So he continues to step backward as it strikes, waiting for the snake to tire out so that it can be captured safely. Suffice it to say, this isn’t a hobby for the faint of heart.

But while Leibman loves the adrenaline rush of dealing with pythons, he’s also motivated by a deep appreciation for Florida’s Everglades, where he goes camping and fishing. He grew up spending time there with his father, and he loves to take trips there with his 14- and 17-year-old daughters. As a baseball coach for children with disabilities, he also brings the kids out to see snakes and other animals.

“Even if we go out there and don’t catch anything, it is one of the most beautiful places in the world,” he said. “If we clean up the python problem, hopefully we’ll have a lot more things to see out there.”

While the first-and second-prize Python Challenge winners hunted in teams, Leibman operates solo — except when his daughters help out with the driving or a tail grab. Though he doesn’t feel they’re ready to grab a python’s head, he says his younger daughter will argue otherwise.

Leibman estimates that he’s caught about 50 pythons since he took up the hobby two years ago. He prefers the term “catching” to hunting, since he doesn’t carry a gun or a machete, and he doesn’t kill the snakes, instead handing them over to a biologist at the University of Florida for research. Some are euthanized, while others are studied alive. “They’re trying to learn as much as they can about them,” Leibman said.

Leibman admits the extent of his religious practice is basically limited to Jewish food, but his girls attend Temple Dor Dorim more frequently than him with their friends.

His next-door neighbor Marty Prenner, who worships at Temple B’nai Aviv, in Weston, also learned a bit about pythons after Leibman asked him to help measure a catch of live snakes.

“There he is, holding the head, and he’s asking me not to worry about it as we’re stretching these animals out one at a time,” Prenner told the Forward. “I handed the front part of the tape measure to him from afar. I pulled (it) out like a foot or so, and said, ‘Here, you grab it.’ I walked the rest of the tape measure all the way to the tail end.”

Prenner describes his one-of-kind neighbor as a passionate, articulate advocater of the environment. “Dave just has a keen sense of the outdoors,” he said. “He definitely is in tune with nature.”

Experts aren’t sure how many Burmese pythons are actually in the Everglades, but more than 1,800 have been removed since 2002. The Nature Conservancy cites estimates of 30,000 to 100,000.

Leibman takes a more conservative stance, and it’s enough to keep him in his pickup, ready to jump at a moment’s notice.

“I believe there’s at least one more out there,” he said.