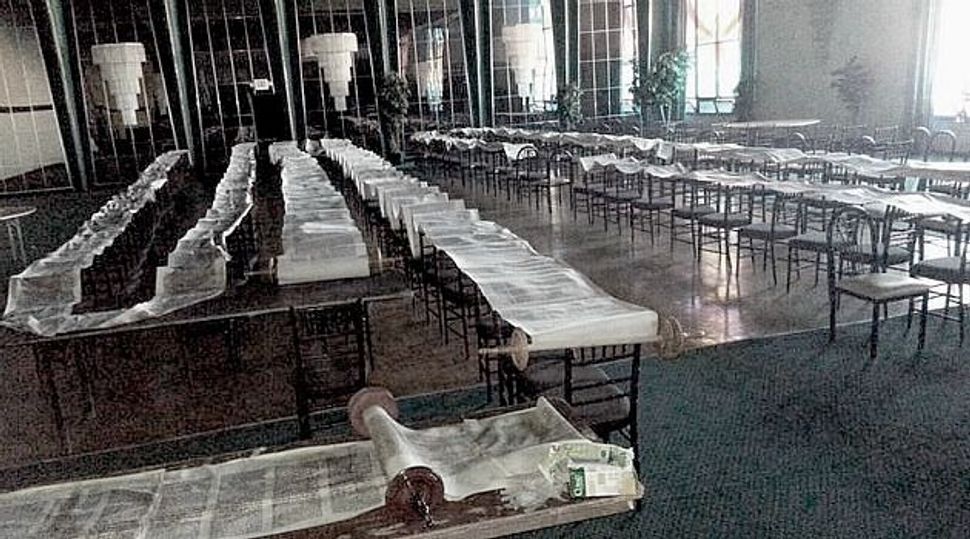 Separation of Sandy and Shul: The superstorm did massive damage to synagogues including this one on Long Island. But the Jewish community is deeply divided on whether the federal government should provide aid to houses of worship, Sandy or no. Image by courtesy of temple israel of long beach

When Congress lingered in approving additional federal funding for communities affected by superstorm Sandy, Rep. Jerrold Nadler, a New York Democrat, forcefully criticized the delay. But when the House of Representatives voted recently to allow houses of worship to apply for federal aid after natural disasters, Nadler vehemently opposed the move.

Nadler said he sympathized with the synagogues, churches and mosques damaged during the storm but did not believe that federal taxpayer dollars should be used to repair religious institutions.

The bill, which would classify houses of worship as private not-for-profit institutions eligible for disaster aid, passed by a vote of 354–72. It now moves on to the Senate, where it could face staunch opposition. Advocates of the bill see it as a no-brainer, given the extent of the damage from the storm, which affected 72 synagogues in the New York area. Critics say the bill raises questions about the separation of church and state. They even claim that such legislative aid is unconstitutional.

The legislation has led to a contested debate among leading Jewish organizations, which universally agree on the exceptionality of Hurricane Sandy’s impact on the Jewish community but differ on how far they are willing to relent on their principles of separation of religion and state. A number of Jewish organizations were instrumental in working with Congress members to create this legislation, but longtime partners have taken different stances in this case. For example, the American Jewish Committee supports the bill, while the Anti-Defamation League is troubled by it.

On the floor of the House just before the vote, Nadler spoke for the critics when he said the legislation was being rushed to a vote. It was as if they were naming a post office, not addressing a law that has potentially serious constitutional implications, he complained.

“This bill should be subject to hearings in the Judiciary Committee, with input from constitutional scholars, and due consideration of these significant constitutional issues, before we take such a radical step,” Nadler said.

The issue has clearly divided Jewish lawmakers, with 14 House members supportive, and 8 opposed. Henry Waxman, the Democratic congressman from California, voiced has approval. “This bill helps these facilities gain access to emergency resources,” Waxman said. “Disasters don’t spare houses of worship; we shouldn’t exclude them from the recovery.”

Jonathan Sarna, professor of American Jewish history at Brandeis University, said the legislation presents the latest phase in the debate between two different understandings of the First Amendment.

“According to one side, it requires a strict separation, and Jews have frequently favored that interpretation, although it doesn’t exactly say that in the First Amendment,” Sarna said. “They have often believed that the more government is separate from religious institutions, not giving them aid and not concerning themselves with religious institutions, the better it would be for religion generally and for minority faiths in particular.”

The other argument, according to Sarna, is that the First Amendment aims “to ensure that government doesn’t favor one religion over another.” An example is the placement of religious symbols in public areas during the holiday season, as long as all religions are represented.

Three months after the October 29 storm, Congress finally approved an aid package for the affected states. It will ultimately total $50 billion. But even before money was allocated, leaders from a broad range of Jewish groups, including the Orthodox Union, the Jewish Federations of North America, the New York Board of Rabbis, the Rabbinical Assembly and Agudath Israel, had already begun pressuring Congress to amend the law that makes houses of worship largely ineligible for aid from the Federal Emergency Management Agency.

Groups like UJA-Federation of New York advised synagogues to apply for FEMA aid, particularly if they provided essential public services, such as schools or homeless shelters, institutions that are eligible to receive aid.

Yisroel Schulman, co-founder, president and attorney-in-charge of the New York Legal Assistance Group, told the Forward last December that organizations involved in critical charitable work should be covered; however, such labels would not be necessary if the current bill passed, as it would include buildings “without regard to the religious character of the facility or the primary religious use of the facility.”

It’s an amendment to the FEMA law that has received bipartisan support in the House. New York City Council Speaker Christine Quinn also wrote a letter to FEMA recently, saying, “Churches, synagogues and mosques serve as a bedrock for our citizens and our communities,” and that recovery from a natural disaster “isn’t a matter of state sponsoring religion.”

But Rabbi David Saperstein, director and counsel of the Religious Action Center, disagreed, saying that the bill “clearly raises issues on separation of church and state.”

“It’s government funding religious institutions and their buildings,” Saperstein said. He also echoed Nadler’s notion that the bill was rushed through the House. “We barely had time to focus on it in our office,” he said. “I hope the Senate will take time to look at this very carefully before moving into a constitutionally problematic area.”

The bill is expected to face a stiffer challenge in the Senate. Rabbi Abba Cohen, vice president of federal affairs for Agudah, wrote in an email, “Our work is by no means finished,” adding that proponents of the bill will have to educate members “both in terms of the law and the need.” If the bill is passed, groups like Agudah would monitor FEMA’s implementation of the legislation. Cohen said FEMA “has not been supportive of the effort,” so far.

“It could take months — sometimes years — for the funding to flow to where it’s needed,” Cohen said.

If passed, another complex issue will be deciding under what guidelines a building will be classified as a house of worship. Sarna noted that throughout the country, there are nontraditional locations that are used for worship, like Chabad houses, or home-based gatherings among Protestants.

“Suddenly, there’s a question of whether we are going to discriminate in favor of religions that can afford to have a dedicated house of worship,” Sarna said. “This particular law will require government to make very complicated decisions about what is and is not legitimate religious worship space.

“On that basis, it may well be that the courts will decide that the law doesn’t pass constitutional muster, but that’s way into the future and will probably be triggered by some group that will put in for reimbursement and be informed that they are not eligible. Then they will say they’re being discriminated against.”

In addition to Nadler, Rep.Robert C. Scott of Virginia spoke out against the legislation, saying it would violate “years of established legal precedence.” Scott said programs are already available to provide help for religious groups, such as the small business loan program. The American Civil Liberties Union also opposed the proposal.

In a statement released earlier this year, the ADL said it had “real concerns about opening the door to direct government funding for houses of worship,” and that a “taxpayer should not have to fund a religion or a religious institution with which he or she disagrees.”

In the Rockaways, in Queens, Rabbi Marjorie Slome has incurred more than $1 million in damages to West End Temple. She said she was “delighted” to hear that the House passed the legislation. Slome was not looking for money to replace Torahs or prayer books, but to rebuild a facility that hosts meetings of Boy and Girl Scouts, Alcoholics Anonymous and other secular civic groups.

“I understand the arguments of those against it, but to me, this is a special situation,” Slome said. “I don’t know if this is going to help my synagogue, but maybe next time, when another natural disaster like this happens, it will be a lot less difficult to fight this battle.”