No Bibi, No Obama, No Peace Talk as AIPAC Prepares for Low-Key Conference 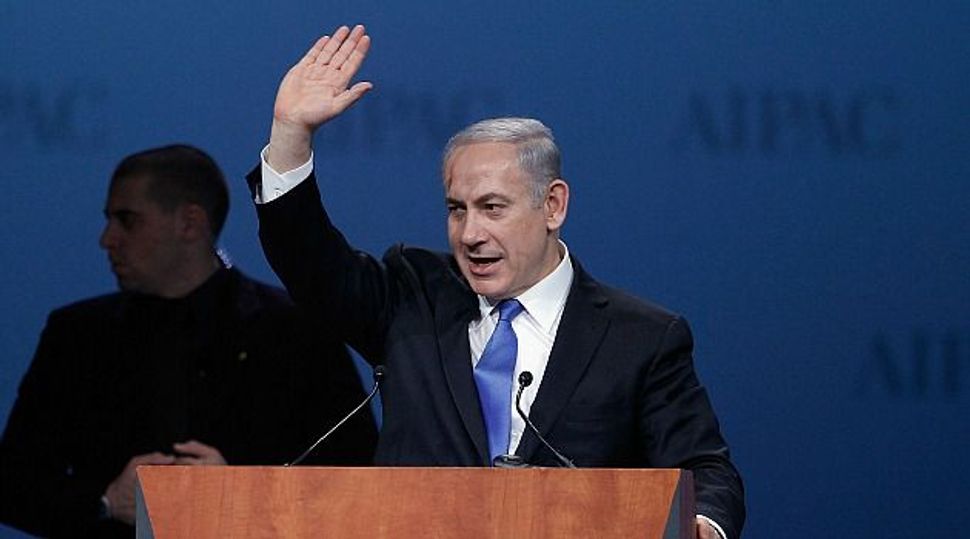 This Time, Last Year: With no elections brewing and hopes of peace dim, this year?s AIPAC conference, which kicks off this weekend, is a relatively low-key event. For the first time in seven years, neither the American president nor the Israeli premier will speak. Image by getty images

Next week’s annual AIPAC policy conference in Washington may be as notable for what — and who — is missing as what’s planned.

For the first time in at least seven years, neither the U.S. president nor the Israeli prime minister will attend. In addition, no mention of the Palestinians, negative or positive, appears on the conference’s legislative agenda.

Instead, the agenda will focus on the Congress enacting legislation that would designate Israel a “major strategic ally” of the United States — a relationship not enjoyed by any other nation — and on facilitating a U.S. green light should Israel decide to strike Iran.

Should the measures being considered by the Senate and the House of Representatives pass, it would constitute the most explicit congressional sanction for military action against Iran’s suspected nuclear weapons program.

The conference runs Sunday to Tuesday, ending with the annual AIPAC lobbying blitz on Capitol Hill.

An official with the American Israel Public Affairs Committee who spoke on condition of anonymity said the thinking behind this year’s theme is the twin urgencies of what appears to be an accelerated Iranian nuclear program and turbulence in Syria and Egypt, both Israel’s neighbors. The official also said AIPAC remains as committed as ever to advancing the two-state solution.

Both emphases dovetail with recent signals from the Israeli government that talks with the Palestinians are not going anywhere soon, and that Iran is the largest looming threat in the region.

The absence of both President Obama and Prime Minister Benjamin Netanyahu appears to be due to external circumstances more than anything else.

Obama will be visiting Israel just two weeks after the conference — his first visit to the Jewish state as president — obviating the need for the president to deliver another Israel policy speech at AIPAC. In his stead, the administration is sending Vice President Joe Biden, who will address the conference on Monday morning. Obama has been at four of the last six AIPAC conferences.

For his part, Netanyahu is still trying to cobble together a coalition government following Israel’s Jan. 22 elections, in which the prime minister’s Likud-Yisrael Beiteinu faction was weakened. Netanyahu will deliver a video message to AIPAC; Ehud Barak, Israel’s outgoing defense minister, will address the conference in person.

Democratic and Republican leaders in both houses of Congress also will address AIPAC.

Despite the absences, AIPAC expects 13,000 activists, including 2,000 students, to attend the conference – a number commensurate with last year’s record-breaker. AIPAC officials say the number is more remarkable in 2013 because it’s not an election year.

The AIPAC official interviewed by JTA said that part of what motivates the push to name Israel a major strategic ally is an appeal to maintain defense assistance funding, averaging more than $3 billion annually, at a time when both parties are seeking ways to drastically cut spending.

U.S. Secretary of State John Kerry wrote congressional appropriators last week to warn that across-the-board “sequestration” cuts due to kick in Friday – unless the White House and Congress achieve a compromise – will hit Israel funding, among other things.

“This is no time to cut aid to an ally,” the AIPAC official said. Conferring major strategic ally upon Israel “would mean that the United States and Israel would work together on a cooperative basis on missile defense, homeland security, energy independence, medical research and innovation and military technology,” the official said.

The push to name Israel a major strategic ally comports with a longstanding preference among some leading Republicans to tweak apart assistance for Israel from other foreign aid, which the conservative wing of the party advocates slashing.

The overriding consideration in such a designation, however, was Israel’s increasingly close security ties with the United States, in the Middle East and across the globe, where the two nations have collaborated on cyber-security issues, the AIPAC official said. The major strategic ally legislation will be introduced in the House and Senate in the coming days.

The conference schedule heavily emphasizes the Iranian threat, Middle East turmoil and the perceived need to intensify further the U.S.-Israel security alliance. There are a few sessions dealing with the Palestinian issue – some with a pronounced skeptical tone when it comes to the peace process.

“Why, despite persistent efforts and an acknowledgment of the general outline for such an agreement, have the parties failed to attain a negotiated peace?” reads the promotional material for one session.

This year’s “AIPAC action principles,” to be considered by the array of American Jewish groups that makes up AIPAC’s executive committee, mention the Palestinians only in the context of keeping them from advancing toward statehood outside the confines of negotiations but do not explicitly endorse the two-state solution. Most of the principles address the security relationship.

Missing also, however, from the AIPAC legislative agenda is any effort to limit U.S. funding of the Palestinian Authority. AIPAC had pushed such efforts in December, after the U.N. General Assembly vote in which the Palestinians gained boosted recognition as a non-member state, but they fell by the wayside in part because of mixed signals from the Israeli government.

No Bibi, No Obama, No Peace Talk as AIPAC Prepares for Low-Key Conference