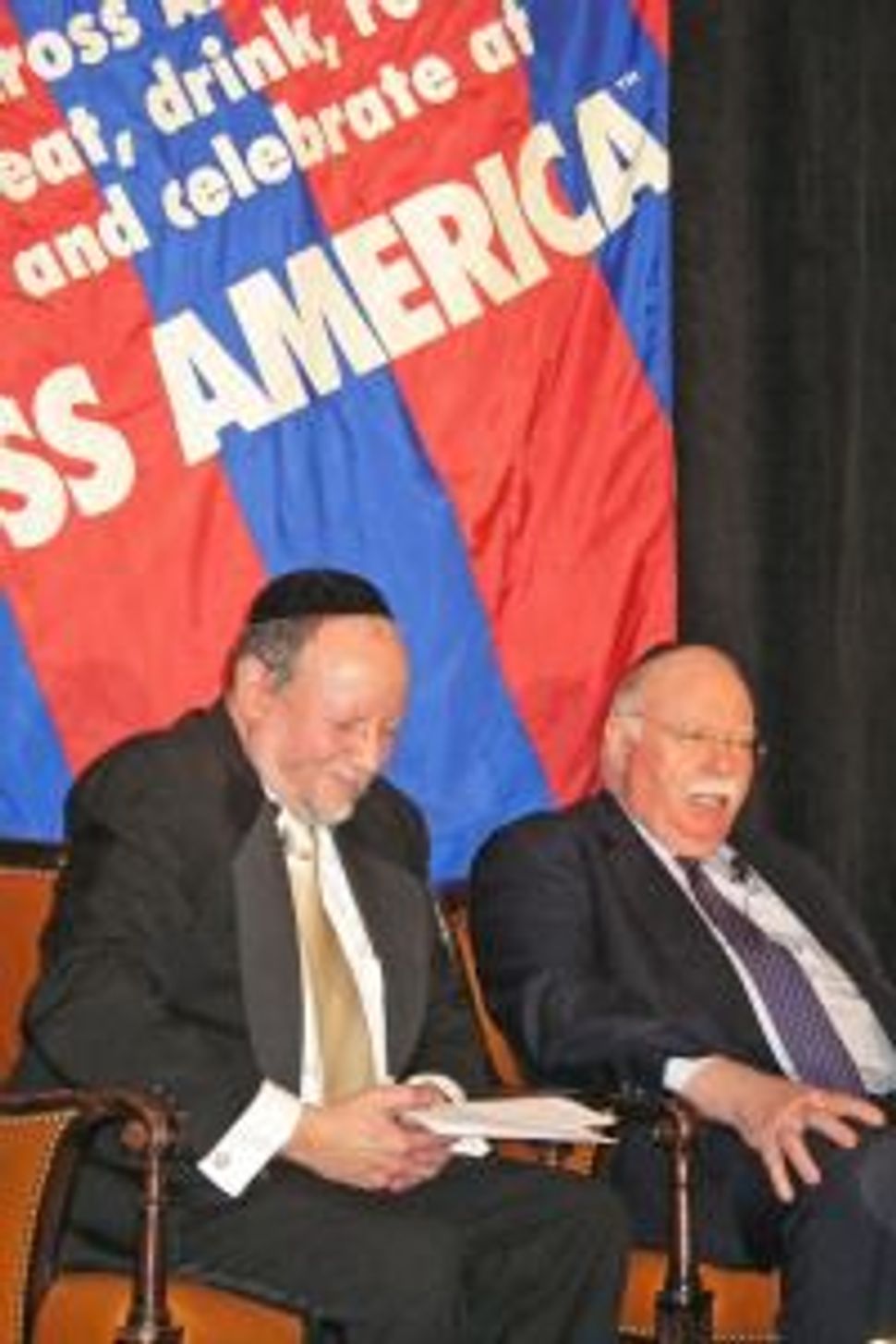 Guests at the National Jewish Outreach Program’s silver anniversary dinner on February 5 were told to “fasten [their] seatbelts” in anticipation of the debate on the state of American Jewry between NJOP founder and director Rabbi Efraim Buchwald and atheist philanthropist Michael Steinhardt.

The debate was moderated by Rabbi Joseph Telushkin, a noted scholar and author of the book “Jewish Literacy,” who opened with the question of how the panelists first met. Buchwald recalled: “I had no experience in fundraising and I was told that ‘you must see Michael Steinhardt.’ I called his office and we were to meet on October 19, 1987. It was the day the market crashed! When I called his office I said, ‘I don’t think it’s a good time for us to meet.’ He said, ‘You’re right.’ When we finally did meet, Michael — being Michael — and me, an Orthodox rabbi, had a drag-out fight over what Jewish life was about.” He continued: “Michael and [his wife] Judy gave us the largest single gift we’ve ever gotten for NJOP’s beginning: $1.5 million!”

When Telushkin asked Steinhardt what he remembered of that meeting, he shook his head and replied: “I have absolutely no recollection of anything he just said.” Seated in a chair in front of a red, white and blue “Shabbat Across America” banner, Steinhardt mused: “Sometimes you feel like a snowball in a coal bin. And that’s how I feel tonight.” Scanning the packed St. Regis Hotel ballroom, he said, “Everyone here is Orthodox or near Orthodox.” Buchwald interrupted: “Raise your hand if you are not Orthodox or near Orthodox!” A few hands went up. “I’ve been an atheist for a long time and Effie [Buchwald] knows and finds that somehow objectionable.” Steinhardt went on to laud the achievements of “Jewish atheists like Freud and Albert Einstein.” Responding to Telushkin’s query about “being Jewish and atheist and not believing in God,” Steinhardt said: “Being an atheist and being a Jew is perfectly consistent.”

“People with your views are not usually invited to pulpits in Orthodox shuls,” Telushkin told Steinhardt. A nonplussed Steinhardt countered: “I started Birthright…and since its first trip 13 years ago, we have sent 340,000 young people between 18 and 26 to Israel. An overwhelming number are not Orthodox. They are Jewish ignoramuses. Maybe a bar-mitzvah [but] no Jewish involvement post-bar mitzvah. They could have gone on a free trip to Italy or Ireland.” Buchwald suggested: “You could require these students to take a crash course in Hebrew before they go so when they get to Jerusalem, they can read the sign Yerushalayim. … The religious Jewish community is becoming a greater part of the Jewish community. The leaders of many Jewish organizations are traditional people like [ADL’s] Abe Foxman. The seculars have abandoned the field.”

Reacting to Telushkin’s statement that “the fact that someone has a Jewish name does not mean they are halachically Jewish,” Buchwald said: “We welcome non-Jews who want to take the Hebrew reading crash course. … We welcome anyone who has any Jewish connection whatsoever…or non-Jew who is married to a Jew…[anyone] considering conversion.” He continued: “We have a woman here tonight from China. While studying for conversion for five years, she said: ‘I am an MOTIT — A Member of the Tribe in Training.’ A few weeks after conversion, she said, ‘I’m an FST — Frum Since Tuesday.’”

What remained unanswered was Steinhardt’s final jab at Buchwald: “You are only skirting the major issue in the non-Orthodox world. … The religious streams no longer attract people. How can you get 4-5 million non-Orthodox Jews interested?”

“There was Hurricane Sandy and the Newtown tragedy,” said Alexandra Urdang, co-chair of the festive Valentine Salon Luncheon held at 583 Park Avenue on February 13. The 200 guests gathered to support Camp Good Grief in East End Hospice in Westhampton Beach, N.Y. “Each year there are less publicized tragedies that fall below the radar screen,” said co-chair Ellen Lowey, a producer on the 2005 John Turturro film “Romance and Cigarettes.” “Children who share the death of a close family member are often left hurt, embarrassed by circumstances and unable to express their grief to friends. Camp Good Grief provides children a safe and comforting environment that offers healing through therapy that is age appropriate.”

Emceed by Linda Baquero, a consumer reporter for NBC4 New York, the luncheon honored Back on My Feet founder and CEO Anne Mahlum with a Good Heart Award, which was presented to her by Hospice board member and event-co-founder Jacalyn Weinstein. Tall and striking with her spiked blond hair, Mahlum inspired the rapt audience with her autobiographical narrative of how she overcame her own family crises and channeled her passion for running into a transformational program for the homeless, who in turn became runners themselves. “They were my cheering squad, like my Dad,” Mahlum said. “Running does not discriminate. I walked up to the shelter with no expectations, and got the homeless — a diverse community — to run. They are an underserved population, and we can change the way they see themselves.”