AIPAC Tries to Brand Israel as Liberal Cause 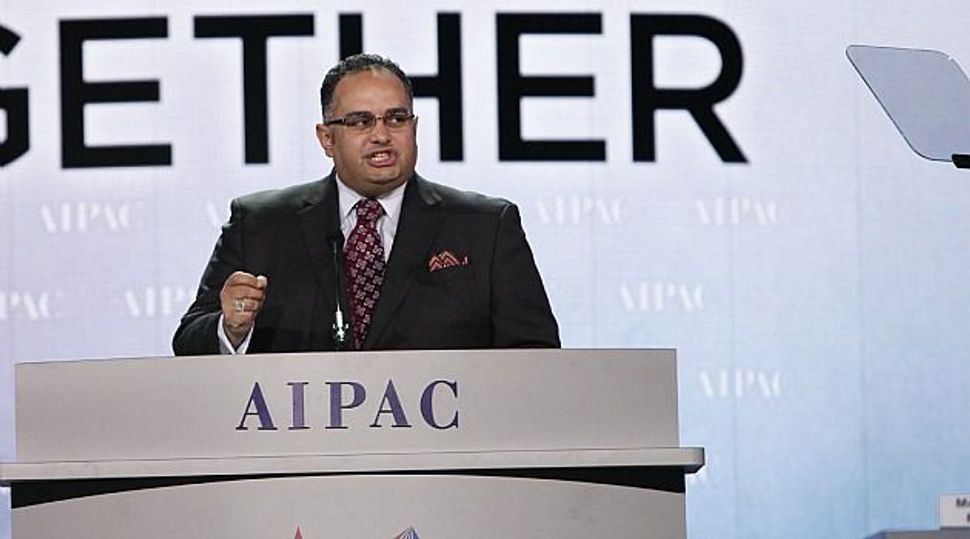 Looking Like America: California Assembly Speaker John A. Perez is Latino and gay. His appearance and others spotlights AIPAC?s effort to cultivate a more diverse constituency for Israel. Image by courtesy of AIPAC

After many years of outreach to conservative evangelicals, the pro-Israel lobby in Washington, facing a liberal ascendance, is now striving to make the case for Israel as a cause for progressives.

At the recent annual conference of the American Israel Public Affairs Committee, advocates of the organization explored strategies for capturing this constituency, largely by looking for ways, as Israeli diplomats put it, of presenting “Israel beyond the conflict” with the Palestinians.

In seeking to appeal to liberal Democrats prone in recent years to critical views of Israeli policies, the activists are depicting Israel as a progressive promised land where values that liberals can only dream of in the United States are already a reality. The AIPAC advocates cite specific issues, ranging from health care to gay rights to inclusion of minorities.

“We need to speak out more as progressives, not to let the other side own the issue of Israel,” said Ann Lewis, who served as a communications director for President Clinton.

At AIPAC’s Washington conference, which took place from March 2 to March 4, Lewis was among those challenging the notion that progressive Democrats are out of place in the pro-Israel camp — and not only at the conference. For the past three years, Lewis has led missions to Israel on behalf of AIPAC’s sister group, the American Israel Education Fund, in which she has tried to move liberal women closer to the pro-Israel camp.

For pro-Israel advocates, progressive Democrats have been a difficult target group. Pollsters have found that progressive voters tend to identify with the perceived underdog and often look unfavorably on strong assertions of nationalism, and these views have distanced them from the pro-Israel cause.

“It is a small problem that could get bigger,” said Democratic political adviser and pollster Mark Mellman, who has advised Jewish and pro-Israel organizations. He noted that polling results show that progressive Democrats holding negative views of Israel do not make up a significant portion of the party, “but you need to address problems when they are small.”

Addressing the problem includes highlighting a side of Israel rarely discussed in AIPAC settings. For example, this year’s conference featured a breakout group at which participants played up the Jewish state’s robust social safety net and its high-level public education system, two issues that many on the liberal side are struggling to improve in the United States.

Another point was Israel’s national health care system, a model that progressives here pushed for before President Obama decided to back a less ambitious approach. Activists also cited Israeli policies related to lesbian, gay, bisexual and transgender rights, noting that Israel has never limited service of gay men and lesbians in the military. They pointed also to representation of Arab Israelis in the Knesset (though only one has ever served as a Cabinet minister), Israel’s absorption of immigrants (although the country welcomes only Jewish immigrants) and enabling women to serve in military combat units.

Bakari Sellers is one of AIPAC’s key presenters when it comes to approaching the liberal community. The 28-year-old African-American Democrat was the youngest member of South Carolina’s state legislature. He first engaged with AIPAC as a student leader at Morehouse College, a historic black institute, and has since visited Israel and spoken at many of the lobby’s events.

“The values we care about, such as human rights, women’s rights and gay rights, are important to Israel,” Sellers said in an interview on the sidelines of the AIPAC conference. “We can hope these values duplicate themselves throughout the Middle East.” This is a theme frequently repeated by lobby activists seeking out support from liberals, as they compare Israel to its neighbors in the region. “Israel,” one activist said, is an “island of liberalism in the desert around it.”

Another politician showcased by AIPAC as a model of liberal support for Israel is John Perez, speaker of California’s State Assembly. Perez, who is Latino and gay, has spoken out about his visit to the Bialik-Rogozin School in south Tel Aviv, where children of immigrants, many of them undocumented, receive quality education with special attention given to their background and specific circumstances.

But some in the liberal camp question the rosy picture drawn by activists like Lewis, Sellers and Perez.

Evan Gildenblatt, executive director of Kent State University’s student government, attended the conference session on liberal outreach. He said he had raised concerns there about actions recently taken by the Israeli government. Specifically, Gildenblatt spoke about the treatment of African refugees, inequality in military service and exclusion of non-Orthodox Jewish denominations, all of which, he said, “are wildly contrary to liberal values.” When the session ended, a participant came up to Gildenblatt and said, according to him, that his question showed “that you don’t love Israel.”

The meeting was closed to the press.

Criticism of Israel in left-leaning circles goes beyond the Palestinian issue. On the domestic front, progressive activists have been critical of an increase in organized exclusion of women from the public sphere, including bus lines in which women are required to sit in the back, and arrests of women wearing prayer shawls at the Western Wall. Other criticisms concern the lack of a coherent policy for dealing with African migrants and the growing income gaps within the Jewish population.

On the Palestinian issue itself, Israel’s recent decision to institute segregated bus lines in the occupied West Bank for Palestinian workers is likely to evoke discordant associations with the American South prior to the civil rights era.

Asked about such issues, Lewis responded: “On every value that I care about, Israel is on the right path. It doesn’t mean that Israel is perfect, but I don’t know of any perfect country, including mine.”

Engaging with liberals is part of the big tent strategy that AIPAC has adopted in recent years. The group increased its activity among minority groups as well as inside the Jewish community, where it ramped up its outreach to Orthodox activists. The policy requires, however, some balancing, since the progressive values praised at one corner of the big tent in order to appeal to liberals can turn away other constituencies that AIPAC relies on for support, such as Christian evangelicals, conservative Republicans and Orthodox Jews.

Part of the effort to broaden AIPAC’s outreach involves making the organization itself more diverse. Speaking at the opening plenary session, AIPAC’s outgoing president, Michael Kassen, talked about the need to reach beyond the lobby’s base, adding that he was “thrilled each year that AIPAC looks more like America.”

The remark could come as a surprise for those looking through the huge conference hall made up primarily of white Jewish men and women. In another attempt to drive home the point, conference organizers put together a session aimed at showcasing the diversity within AIPAC’S own staff. Some 20 participants, barely filling the first rows of the large meeting room in which the session was held, were presented with four young staff members, each telling his or her own story: a Mormon from Pennsylvania, an evangelical woman, a gay African-American and a Christian immigrant from Ukraine. It may not have been the subtlest way to tell the story of AIPAC’s diversity, but it demonstrated the lobby’s desire to keep in tune with political trends.

How effective is AIPAC’s messaging to liberal Democrats?

Mellman said that reaching out to communities based on their own concerns is an important way of engaging, whether it relates to LGBT rights, access to health care or immigration. But, he noted, “You also need to talk about the issue itself,” referring to the Israeli-Palestinian conflict. “Talking about only one part is not enough.”

AIPAC Tries to Brand Israel as Liberal Cause