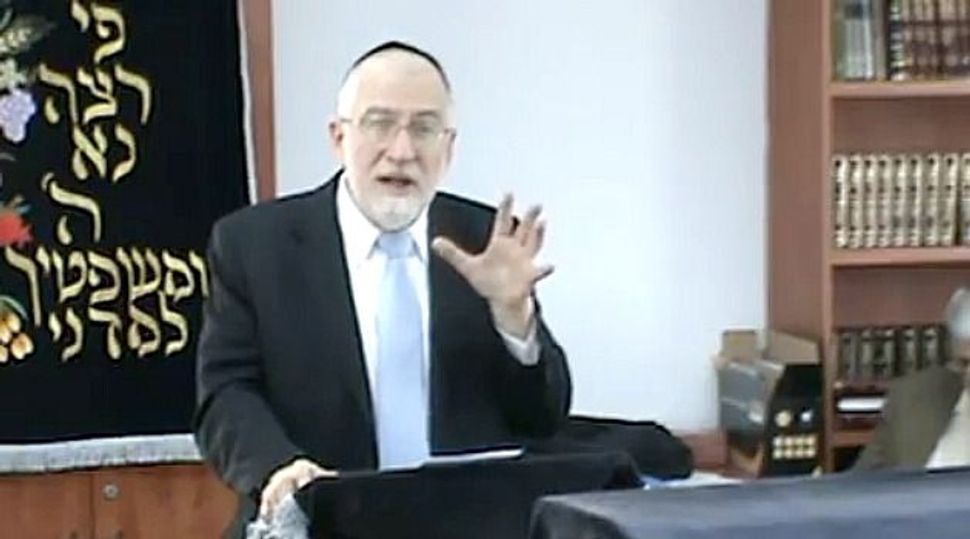 Tall Tales: Rabbi Hershel Schachter was recorded at a London conference railing against the dangers of reporting child abuse claims directly to police. He used a derogatory word to claim that false claims could lead to Jews being jailed with black inmates. Image by youtube

A top rabbinic dean of Yeshiva University has warned rabbis about the dangers of reporting child sex abuse allegations to the police because it could result in a Jew being jailed with a black inmate, or as he put it, “a shvartze,” who might want to kill him.

Rabbi Hershel Schachter, one of the most respected faculty members of the Rabbi Isaac Elchanan Theological Seminary, also said that children can lie and ruin an innocent man’s life.

“It could be that the whole thing is a bubbe-mayse [tall tale],” Schachter said.

Schachter said Jewish communities should establish panels of rabbis who are also psychologists to first hear such allegations and decide if law authorities should be informed.

Schachter, whose taped remarks were posted on the Failed Messiah website, said a student at Yeshiva University’s high school in Manhattan confided in him years ago that he had been abused.

Schachter said that he asked the student to tell his story to a rabbi who served as the school psychologist, but the child refused because of the humiliation it could bring on his family.

He said he did not report the abuse to the authorities because he could not be sure the allegations were true.

“So now, 40 years later, the guy’s spilling everything out to the newspaper,” Schachter said in the recording.

Schachter then suggested it was the former student’s fault if more children were harmed because he refused to speak to the psychologist.

He appeared to be referring to Simeon Weber, a former Y.U. high school student who, in previous interviews, told the Forward that he informed Schachter he had been abused by a Y.U. administrator, Rabbi George Finkelstein.

However, there were discrepancies between Schachter’s and Weber’s recollections. Weber said he told Schachter about Finkelstein after he left Y.U.’s high school, when he was a Yeshiva College student, during the early 1980s. He also had no memory of being asked to see a school psychologist.

When asked to comment on Schachter’s remarks, Weber stuck to a carefully worded statement.

“I had the privilege of learning torah with Harav Hershel Schachter for four years,” Weber said. “Though I was far from his best student, I treated him with reverence [and] with the respect due to a true Gadol B’Yisroel [giant of torah].”

Weber added: “Though I am deeply hurt by my rebbe’s comments, my underlying feelings of respect and fond memories of our deep relationship require me to say no more than that the issue itself has to be addressed by those greater than me.”

Yeshiva University has been embroiled in a mounting scandal following a series of reports in the Forward since December about abuse allegations against two former staff members at Yeshiva University’s high school for boys in Manhattan.

Several former students have told the Forward that they were sodomized by Rabbi Macy Gordon, a Talmud teacher employed at the school until the mid 1980s. More than a dozen students have complained of inappropriate behavior by Finkelstein who rose to school principal before he resigned in 1995.

Finkelstein was notorious for forcing students to wrestle with him in a school office and at his home. Several students told the Forward they could feel his erect penis grinding up against them during the wrestling sessions.

Schachter has not returned multiple calls and emails for comment since December, including attempts to seek an explanation for his recent remarks. Finkelstein and Gordon have both denied the students’ allegations against them. Rabbi Norman Lamm, who was president of Yeshiva University until 2003, told the Forward in December that several staff members were allowed to leave quietly because of “improper sexual activity.”.

Schachter told the New York Times, in December, that in addition to Finkelstein and Gordon he knew of another staff member who had been let go for similar reasons. He has never revealed the name of that member of staff.

According to Failed Messiah, Schachter was recorded in February, speaking at a rabbinic conference in London, the same month that the U.K.’s United Synagogue held its annual retreat in the city. Two independent sources have confirmed to the Forward that the voice on the tape is, indeed, Schachter’s.

Schachter told his audience that reporting abuse to the police or family service agency does not constitute mesirah — the traditional Jewish prohibition against informing on a fellow Jew to the secular authorities.

But Schachter emphasized that Jewish communities nevertheless had to first make sure children were telling the truth before going to law enforcement authorities. He cited several instances in America and in Israel in which he said false accusations were made.

Every community, said Schachter, needs a board of “talmidei chachamim” — Torah scholars — who are also qualified psychologists who could interview victims to see if there is “raglayim la’davar” — or reasonable suspicion — of abuse.

He added: “Before you go to the police and before you got to family services, every community should have a board…to investigate whether there’s any raglayim la’davar or not.”

Schachter went on to say that federal prisons are acceptable for Jewish convicts because they offer needed services, such as glatt kosher food.

But, he added, Jews must be more careful where state prisons — to which the majority of sex offenders are sent — are concerned.

Schachter told his audience that in state prisons “the warden in the prison can kill you. They can put you in a cell together with a shvartze, with a… black Muslim who wants to kill all the Jews.”

“Any offensive or derogatory comments about any people or groups are inconsistent with the values or mission of Yeshiva University.”