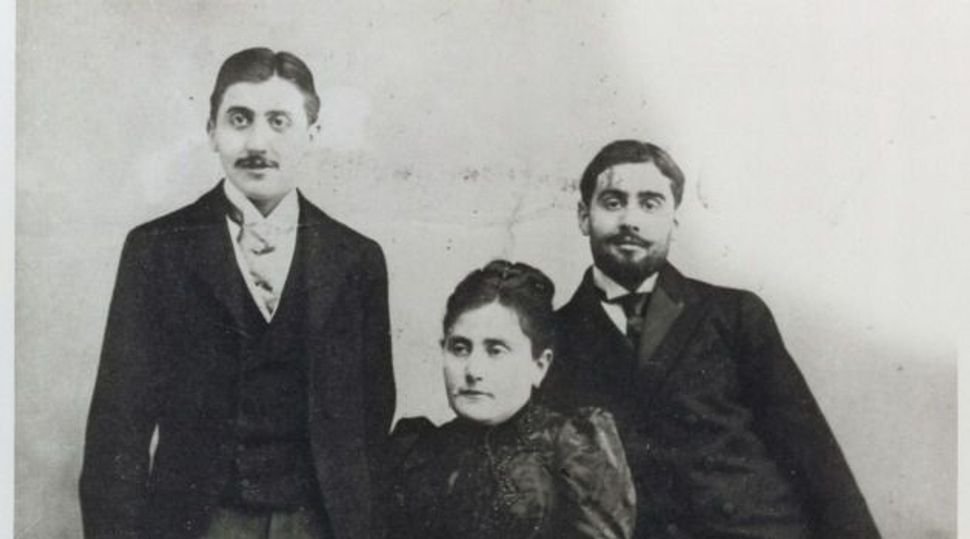 Proust?s Way: The author with his mother Jeanne and his brother Robert. Image by BNF. DIST. RMN-GRAND PALAIS

Everyone loves a centenary. One hundred years might not be more important than 99 or 101, but it?s an occasion to revisit a part of the past we don?t think about every day. Memory doesn?t require a reason ? just an opportunity.

With the revolutions, wars and innovations of the 20th century now reaching their centennial points, those opportunities are about to increase dramatically. Already we?ve had the San Francisco Earthquake (1906), the Triangle Shirtwaist Factory Fire (2011) and the sinking of the Titanic (1912). In the coming years we?ll have the Russian Revolution, the Depression and both World Wars. We?re about to live the 20th century over again, this time as 100-year anniversaries.

Nestled among these events is a more humble occasion: the 1913 publication of ?Swann?s Way,? the first volume of Marcel Proust?s great novel, ?In Search of Lost Time.? To celebrate, there is an exhibit at the Morgan Library & Museum featuring Proust?s notebooks, manuscripts and galleys, on loan from the Bibliothèque Nationale de France. There was recently a marathon reading of the book at a Manhattan bookstore, kicked off by The New Yorker?s Adam Gopnik. A new edition of Proust?s poetry is being published by Penguin Classics, in both French and English translation. For readers looking to acquaint themselves with the author, it?s a once-in-a-century opportunity.

It?s fitting that Proust, our culture?s high priest of memory, should usher in the coming onslaught of centennials. Though he is celebrated most for his revelatory expression of personal memory ? the famous rush that accompanies a tea-dipped madeleine in the first section of his novel has become nearly synonymous with the whole book ? Proust was fascinated by history in all its forms. ?In Search of Lost Time? is filled with descriptions of paintings, landscapes and architecture that recall scenes from the distant past. Many of Proust?s characters are aristocrats whose pedigrees embody a near-mythical history, even as they exhibit the full range of modern foibles. In Proust?s novel, time is like an imperfect palimpsest, each layer revealing the strata beneath.

The exhibit at the Morgan, whose contents expose the stages of Proust?s composition, would likely have pleased the author himself. Located in the small, square Clare Eddy Thaw Gallery, it features notebooks filled with cramped, messy handwriting, along with sketches and elaborate doodles. At a later stage, galleys display a wealth of variations and corrections, including an entirely different opening passage crossed out to leave the famous first line, ?For a long time I would go bed early.? In one draft, the synecdotal madeleine is instead ?biscottes.? It?s a reminder that the contours of our world, and of its great works of art, are not as inevitable as they seem.

Along with artifacts documenting the construction of ?In Search of Lost Time,? there are photographs and postcards showing the setting of Proust?s life and work. There is the frail, almond-eyed teenager in a 10th-grade picture from the Lycée Condorcet, and images of the Paris neighborhoods where scenes from the novel took place. At the opening of the exhibit, along the left wall, there is a photo from around 1895, showing the author with his mother, Jeanne Proust (née Weil), and his brother, Robert Proust. Sporting a morning coat, crisply parted hair and a neat moustache, Marcel casts a sly glance at the camera, while his brother, lightly bearded and leaning on his right arm, seems relaxed and assured. Their mother, dour and matronly, directs her gaze downward. On the wall next to the photo there is a passage written by Robert Proust some 28 years later, contemplating his brother?s recent death. ?He was my entire past,? he writes. ?My entire youth was enclosed in his person.?

To us, Marcel Proust has become a similar touchstone, representing an experience of memory and history that is now embedded in the culture. But Proust?s relationship with history was more ambivalent than is usually assumed. One of the great insights of his novel is that we perceive the world through clusters of ideas and associations that we believe to be universal, but are entirely our own. So, too, our historical sense is shaped not just by knowledge of the past, but also by experiences whose meanings change as we age. When the young narrator sees the Duchesse de Guermantes for the first time, he is shocked to discover that the red-faced large-nosed woman is unlike the image he had conjured from tapestries and stained-glass windows. But immediately he begins to apply those associations back onto the actual duchesse, whose family was ?great and glorious before the days of Charlemagne.? There is nothing we experience that is not influenced by everything else we know.

Memory, personal and historical, is often accompanied by moralistic sentiment. Nostalgia is an act of escapism and self-indulgence, but to forget the past is an even graver sin. Proust presents a more complicated paradigm. Looking back provides us with a reflection of ourselves, but also with an awareness of the mirror ? grounds for our ideas as well as a means for their correction.

As we mark centennial after centennial through articles, documentaries, books, exhibits and public events, our collective memory will reflect the changes of more recent years, transforming past and present. Our idea of the 20th century will be radically different by the end of the 21st, and with it our preparation for what follows. What, in 100 years time, will we think of the Communist experiment, the Arab-Israeli conflict or the creation of the Internet? As Proust well knew, when we stop to remember, it?s not just the past that?s at stake ? it?s everything we are.