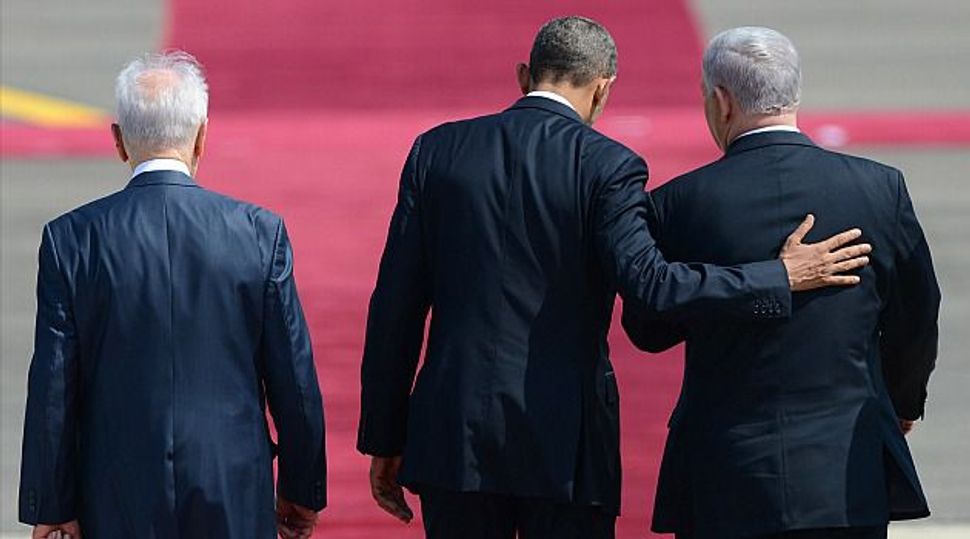 Red Line on Tarmac: Barack Obama walks with Benjamin Netanyahu and Shimon Peres at the airport in Tel Aviv. Despite the leaders? well-publicized differences, they managed to share a few yucks over the ?red line? on the tarmac. Image by getty image

Until now, when both leaders uncorked some rapid fire one-liners during Obama?s tour of a partially U.S.-funded anti-missile system that he inspected after a red carpet welcome ceremony on Wednesday at Tel Aviv airport.

?Where do you want to start?? Obama asked an Israeli military official, in a comment picked up by TV cameras providing close coverage of the president and Netanyahu walking together toward the battery.

?We are following the red line, sir,? the officer replied matter-of-factly, referring to a red line painted on the tarmac that led to the missiles.

?The red line, okay,? said Obama, who smiled, gestured with his thumb toward Netanyahu and said: ?He?s always talking to me about red lines.?

It was a rare moment of levity between the two, whose often testy relationship has been illustrated by stern-faced appearances before cameras during Netanyahu?s visits to the White House.

The public display of bonhomie lightened the tone at the start of a visit by Obama that is not expected to produce much in the way of policy initiatives.

In a speech at the United Nations in September, Netanyahu drew a red line on a cartoonish drawing of a bomb, depicting the point where he said Iran will have enough medium-enriched uranium to move rapidly toward building a nuclear bomb.

Netanyahu said at the U.N. that Iran could reach that point this spring or summer. Obama, who has pledged to prevent a nuclear-armed Iran has resisted setting any such deadlines. Tehran says it is enriching uranium for peaceful purposes only.

Continuing his banter as he walked along the thin red line at the airport, Obama said with a smile: ?So this is all a psychological ploy?.

Chuckling, Netanyahu shot back: ?This was minutely planned.?

Obama also joked with some Israeli military officials as he hopped out of an SUV on the tarmac, and said: ?I?m a young man. I?m always looking for a chance to walk.?

According to Israeli news reports, he nearly had to walk in Jerusalem, where a presidential limo had to replaced before his arrival after its tank was filled with diesel fuel instead of regular gasoline.