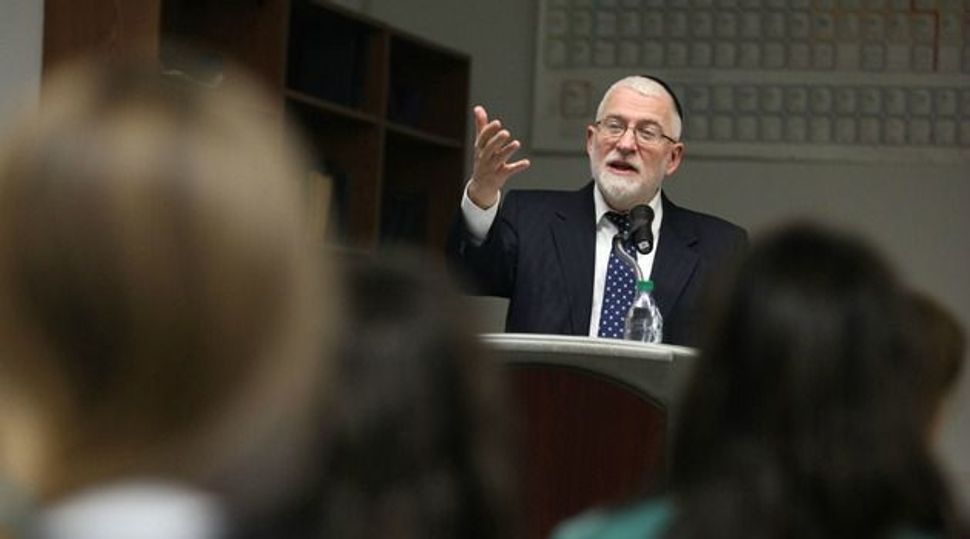 Not First Time: Rabbi Hershel Schachter is universally recognized as a Talmud scholar. When he speaks about more worldly matters, he has a history of making offensive remarks. Image by yeshiva university

One of Yeshiva University?s leading rabbinic scholars is in trouble ? again ? after using a derogatory term to refer to African Americans and questioning whether child sex abuse allegations should be brought directly to police.

Rabbi Hershel Schachter, regarded as one of America?s most influential Modern Orthodox rabbis, previously provoked ire for appearing to equate women with monkeys and for seeming to condone the killing of Israel?s prime minister.

This time, Schachter is in trouble for telling an audience of British rabbis that American state prisons are dangerous for Jews because they could be locked up ?with a shvartze, in a cell with a Muslim, a black Muslim who wants to kill all the Jews.?

Schachter also suggested that Jewish communities set up panels of Torah scholars who are trained in psychology; this way, before children?s allegations of sex abuse claims are reported to the police, the panel can determine whether the allegations are legitimate. ?It could be that the whole thing is a bubbe-mayse [tall tale],? Schachter said.

He also claimed that New York hospitals are covering up cases of ultra-Orthodox mohels transmitting herpes to infants during circumcision because the hospitals fear they will lose Haredi patients.

A recording of segments of the talk, which was delivered in London in February, was posted on FailedMessiah.com March 15 and independently verified by the Forward.

Schachter, one of the most respected faculty members of the Rabbi Isaac Elchanan Theological Seminary, is called upon regularly to lecture and advise America?s leading Orthodox organizations, such as the Rabbinical Council of America and the Orthodox Union.

?Hundreds of rabbis hang on [Schachter?s] every word and interpret his every utterance as binding Jewish law,? said Rabbi Shmuel Herzfeld, spiritual leader of Washington?s Ohev Sholom National Synagogue, a Modern Orthodox congregation. ?Because of that, he has a tremendous responsibility to speak carefully.?

Y.U. hosts more than 3,700 of Schachter?s shiurim, or lessons, on its affiliated Y.U. Torah website. The Forward asked a Y.U. spokesman whether Schachter?s complete London shiur had initially been posted on this site and, if so, what had happened to it. The spokesman did not respond by deadline.

After Failed Messiah?s posting of the recorded excerpts, Y.U. sought to distance itself from Schachter?s remarks, citing its faculty?s ?freedom of speech and expression.? But one day later, under pressure from the Anti-Defamation League, Y.U. condemned Schachter?s use of the word shvartze.

?The recent use of a derogatory racial term and negative characterizations of African Americans and Muslims by a member of the faculty are inappropriate, offensive, and do not represent the values and mission of Yeshiva University,? a Y.U. spokesman told the ADL, which, in turn passed on the statement to the Forward.

In an interview with the Forward, Y.U. spokesman Michael Scagnoli declined to comment on Schachter?s other remarks, including his position that child sex abuse allegations within the Jewish community should be screened by a panel of Torah scholars trained in psychology before those deemed valid are brought to the police.

The university has faced intense scrutiny in recent months following an outpouring of claims of emotional, physical and sexual abuse against former employees of Yeshiva University High School for Boys between 1970 and 1995.

Herzfeld, a prominent graduate of the school, said Schachter?s child abuse comments sent a message to victims that Y.U., which is conducting an investigation into the abuse allegations, is not receptive to hearing about claims. ?It?s really very sad and very, very concerning,? Herzfeld said.

In December and January, the Forward published several reports in which more than 20 Y.U high school students told of being sexually and physically abused at Y.U.?s high school over a period spanning three decades. The reports led Y.U. to commission its investigation, still ongoing, into the allegations

In his talk, Schachter recounted how decades ago he decided not to tell law enforcement authorities about abuse allegations brought to him by a student at Y.U.?s high school. He said he decided not to do so when the student, citing deep embarrassment, declined to see a school psychologist

Schachter went on to suggest that the student was responsible for any further students who may have been harmed by his alleged abuser, because he would not see the psychologist.

?So now, 40 years later, the guy?s spilling everything out to the newspaper,? Schachter said.

Schachter also cautioned against reporting abuse to the authorities without first seeking advice from a Torah scholar, because, he said, police and social service workers often ?don?t handle the situation properly.?

After citing anecdotes of alleged wrongful accusations against men in Israel and in America, Schachter said, ?Before you go to the police and before you go to family services, every community should have a board? to investigate whether there?s [reasonable suspicion of abuse] or not.?

Erin Duggan, chief spokeswoman for Manhattan District Attorney Cyrus Vance, said her office ?strongly encourages? adults, whether or not they are mandated by law to report abuse, ?to report any suspicions of child abuse to law enforcement.?

?Law enforcement personnel who specialize in investigating crimes against children have unique training to evaluate a report of abuse and to determine if a further investigation is appropriate,? Duggan said.

Schachter?s statements have caused uproar before. In 2004 the rabbi invoked a common talmudic idiom about monkeys to explain why any Jew, even a woman, may publicly read out a Jewish marriage contract, or ketubah, as part of a wedding ceremony. In 2008 he was forced to cut short a trip to Israel and to issue an apology for suggesting that the Israeli prime minister should be shot if he ceded control of Jerusalem.

At the time, Schachter and Y.U. President Richard Joel said in separate statements that Schachter?s words did ?not represent [Schachter?s] views.?

Several leading Modern Orthodox rabbis, speaking off the record, described Schachter as an open-minded and tolerant man. They expressed sadness at his remarks, particularly at his use of the word shvartze. ?That?s just not who he is,? one rabbi said.

Schachter?s defenders point out that he stated clearly in his talk that mesirah ? the traditional prohibition against informing on a fellow Jew to the secular authorities ? is not an issue in cases of sex abuse.

Shmuel Goldin, president of the RCA, said Schachter ?has the respect of the RCA.? But he stressed that his organization?s official position on reporting abuse does not require a panel of Torah scholars to evaluate claims.

?Our position is that credible allegations of abuse should be reported directly to the authorities,? Goldin said.

The O.U. turns to Schachter regularly for advice on Halacha, or Jewish law. Weinreb said Schachter is the ?final halachic authority? only with regard to kosher food, and that ?he is not a spokesman for O.U. on other matters, although we consider his input respectfully.?