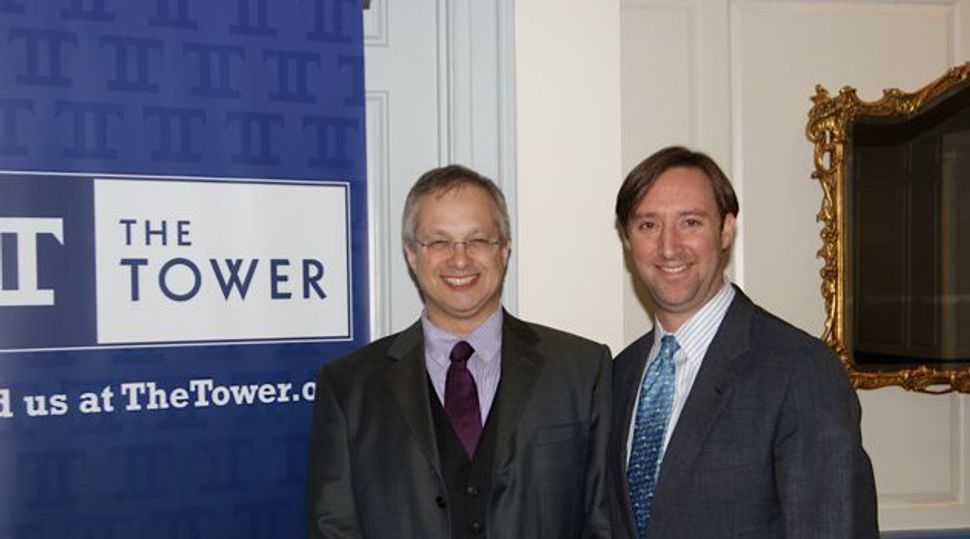 New Approach: The head of The Israel Project, Josh Block, right, and David Hazony appear at a launch of the group?s new publication, The Tower. Image by Nathan Guttman

As the new head of The Israel Project, Josh Block brings an aggressive, in-your-face style of operation to one of the Jewish community’s fastest-growing organizations, even as the group undergoes sweeping changes with his arrival.

It’s an approach that contrasts strikingly with that of his predecessor, TIP founder Jennifer Laszlo Mizrahi, under whose tenure the organization developed a reputation as Israel’s most effective nongovernmental public relations agency. But that may not be the most important part of the transformation now taking place .

Developed by Mizrahi as a multinational campaign to change perceptions of Israel worldwide, TIP is now withdrawing from the international arena, including countries, such as China and India, whose global influence is surging.

It was in 2002 that Mizrahi established TIP — a private initiative funded by wealthy backers that engaged journalists (and others) with information targeting their working needs. Among other things, TIP helped media people gain access to Israeli decision makers and expert sources, and conducted public opinion polls offering crucial nuggets of information about how people viewed Israel and its neighbors.

Where journalists seemed strongly critical of Israel, TIP wielded its formidable public relations resources to make its case and, it hoped, show them the error of their ways.

As Mizrahi’s successor, Block faces a double challenge. While overseeing massive changes in TIP’s organizational focus and personnel shifts in the group’s leadership, he is also attempting to reshape his own public image. To many, Block seems something like Mizrahi’s temperamental opposite: an aggressive defender of pro-Israel views, even at the price of openly quarreling with journalists, rival organizations and the Obama administration.

At a reception in a fancy Washington hotel March 21, Block celebrated the launch of The Tower, one of TIP’s new projects. An online long-form journalism publication devoted to Middle East and Israel issues, it is, as Block boasted, “Vanity Fair Meets Foreign Affairs.” Block addressed the crowd of journalists and foreign policy wonks gathered around an ice sculpture in the shape of the website’s logo.

The Tower’s first issue features a medley of writers representing a wide variety of viewpoints, a fact that TIP officials point out repeatedly. For Block, the new magazine and the daily website The Tower are viewed as a “home for ideas” supporting the group’s mission, which he defined in an email exchange as “to provide facts, and educate and inform the media and policy conversation about Israel and the Middle East.”

The idea of launching TIP’s own online publication follows a course set by other interest groups, among them the progressive Center for American Progress and its ThinkProgress blog, a publication that came under harsh attacks from Block before joining TIP, because of the views that some of its writers expressed on Israel.

The Tower Magazine’s editor is David Hazony, a conservative Israeli-American writer (and a Forward columnist). Hazony and Block refer to the publication as “nonprofit journalism,” which, the magazine editor believes, will help explain “the most misunderstood state” that is Israel. The first issue includes an essay arguing that Israel is America’s last ally in the Middle East; alongside it is an article comparing threats to children from violence in the United States with terror in Israel, and a discussion of gay and lesbian issues in Israel and how they differ from the debate in America. “I don’t think I’m advocating any ideology,” Hazony said, arguing that the publication should be read “for its own merits,” regardless of the group behind it.

The new publication is only a small part of a massive facelift at TIP. Mizrachi brought the group to life during the height of the second intifada, when images from the Middle East were plastered daily on the front pages of American newspapers, and Israel’s portrayal was at times that of the aggressor, not the victim.

Since then, TIP has been one of the fastest growing Jewish organizations. In 2011, according to the latest available tax filings, it began raising multi-year pledges and collected more than $19 million. From traditional hasbara — the Hebrew term for viewpoint promotion —focused on educating the press, TIP expanded to a global operation working in Europe, China, India, Latin America and Russia, and hosting an extensive Arabic-language operation. Mizrahi saw the group’s Mandarin and Arabic operations as particularly crucial to the future of pro-Israel advocacy. The group also spent $1 million a year on polling, hiring top political pollsters to examine messaging on Israel and to gauge international public opinion.

Much of this is now gone. TIP board members ultimately rejected Mizrahi’s view of China as a key arena in the battle to influence public opinion on Israel. TIP does still maintain its program in Arabic, which is based in Israel and will soon expand its publications. Funding for this program is provided mainly by one TIP donor, New York businessman Richard Perry. But beyond that board members have stressed the need to “go back to the basics” of the organization’s mission. By the time Block took over, TIP had completed the process of shutting down its other international operations in favor of focusing on the United States.

The leadership overhaul also involved the departure of many of TIP’s senior staff members, including Laura Kam, who was in charge of the group’s global affairs; director of communications Alan Elsner, and research director Meagan Buren. All former employees were required to sign a nondisclosure agreement preventing them from discussing their workplace.

Block, while stating that TIP’s mission and goals remain unchanged, comes to the organization with strong convictions about threats that pro-Israel advocacy faces from critics. He sees many of those critics as aligned with the liberal camp. And he paints them in stark terms.

“There exists today a well-coordinated and financed, albeit fringe, echo chamber of organizations and individuals ranging from anti-Zionist conspiracists and apologists for Iran, and [for] terrorists like Hamas and Hezbollah, to anti-Israel advocates and those hypocritically and relentlessly critical of Israel, seeking to spread and mainstream distortions and misinformation in pursuit of their misguided and often hostile agenda,” Block said. TIP’s work, he said, “blunts the spread of false, malignant, even anti-Semitic claptrap.”

Still, for Block, this is a painstakingly cautious choice of words. Known to many in the media world for his blunt style, Block went to war as recently as last year with CAP and Media Matters, accusing the groups of “borderline anti-Semitism” for using terms such as “Israel firsters.”

Armed with an impressive contact list of national journalists, Block has at times also taken on the Obama administration for its policies on Israel by sending massive email blasts and circulating publications critical of these policies. Most recently, Block got involved in the controversy over Obama’s choice of Chuck Hagel to be his defense secretary. In interviews, he attacked Hagel’s record on Iran and described his views as “well outside the mainstream.”

Block says that his intervention regarding Hagel was not partisan; rather, it was a policy opinion given before the nomination became official. By going to battle at that stage of the process, he said, “we were able to be descriptive of the facts and record, which helped lead to an important public conversation and a reversal [by Hagel] of views on the key Iran-related issues we identified.”

Block argued that national Jewish organizations such as the Anti-Defamation League and the American Jewish Committee took harsher positions against Hagel. But a former administration official noted that Block’s actions did not seem in line with TIP’s previous strict policy of not taking sides, at least directly, in ongoing partisan political clashes in Washington. The group’s departure from acting merely as a helpful source for pro-Israel information “calls into question what the role of TIP is, could be and should be,” said the former official, who spoke on condition of anonymity, so as not to appear to be reflecting an official administration view.

Block, 39, was chosen to head TIP last summer after a lengthy search process following Mizrahi’s departure. He served previously as spokesman and strategic communications director of the American Israel Public Affairs Committee for a decade, but the biographic detail he tends to highlight most is his stint in the Clinton administration as a spokesman at the U.S. Agency for International Development. This role, and his work in Democratic politics earlier, is frequently brought up as a response to claims of partisanship. Block’s father, Rabbi Richard Block, was recently installed as president of the Central Conference of American Rabbis.

“He is a Scoop Jackson Democrat,” said William Daroff, vice president of public policy at the Jewish Federations of North America, when describing Josh Block’s views. “In his time at AIPAC and at TIP, he has done a yeoman’s effort in joining me in the post-partisan caucus of Jewish officials.”