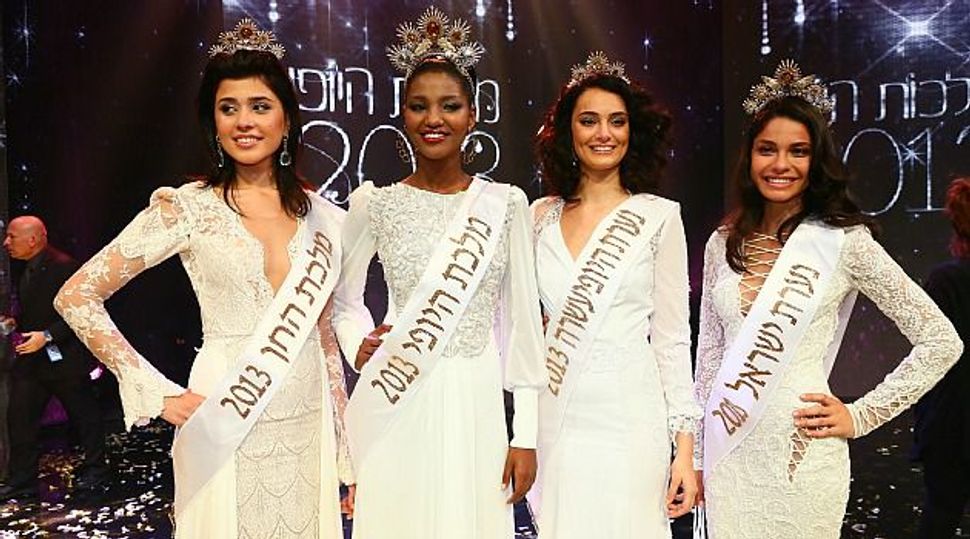 Growing Diversity: Miss Israel Titi Aynaw is the first black woman to win the title. She says it showcases the growing diversity of Israeli society. Image by MOSHE SASSON

When Yityish Aynaw immigrated from Ethiopia to Israel at age 12, she was thrust into an Israeli classroom. An orphan lacking Hebrew skills, Aynaw says she relied on other kids and her own sheer ambition to get through.

Ten years later Aynaw, 22, is the first Ethiopian-Israeli to be crowned Miss Israel – a title she hopes to use to showcase Israel’s diversity.

“Israel really accepts everybody,” she told JTA. “That I was chosen proves it.”

Ethiopian and other African-Israelis have historically struggled with poverty and integration. But recently, several African-Israeli women have made a pop culture splash.

Along with Aynaw, Ethiopian-Israeli actress Ester Rada, 28, has just released her first solo rock record to positive reviews. And Ahtaliyah Pierce, a 17-year-old Black Hebrew Israeli, reached the semifinals on Israel’s edition of “The Voice,” a reality show in which emerging singers compete.

Though their personal stories diverge, each woman has experienced challenges as an African immigrant and wants to use her fame to help other African immigrants better integrate into Israeli society.

“It’s hard for Ethiopians to adapt, but they should be who they are, be the best that they can be,” said Rada, who was born in Jerusalem to Ethiopian parents who spoke Amharic at home. “Don’t let others keep you down or make you feel like we don’t belong.”

Rada’s parents stayed close to their Ethiopian roots, eating traditional foods and listening to traditional music. But Rada rebelled. She refused to speak Amharic and failed to understand why she should feel tied to a country she had never seen and did not understand.

In recent years, the resistance has softened. Ethiopian culture “is a part of me and I can’t run away from it,” Rada said. “I decided to embrace it. And it’s helped me define who I am, in my culture and in my music.”

Aynaw says it’s important for Israelis to see the positive side of the Ethiopian community. She compares the effect of her winning Miss Israel to Barack Obama’s election as president of the United States. The two met at the Israeli president’s residence during Obama’s recent trip to the region.

“There are wonderful things about the [Ethiopian] community, and it’s important that [Israelis] see it,” she told JTA. “Israel is a multicultural state. We’re diverse and we come from different countries, so we need to show that outwardly.”

Rada and Pierce report incidents of racism directed at them because of their skin color. A woman once accused Rada of coming to Israel only for the money. And Pierce says in her hometown of Dimona, she used to be called “kushi,” a Hebrew pejorative used to describe blacks.

“There are many stigmas about the community, and unfortunate stories,” said Hava Tizazu, an Ethiopian-Israeli actress who works with at-risk African youth. “Now there are new personalities who are beautiful and positive. It helps to change the image, but it’s just one step in a longer process.”

Since she advanced to the semifinals on “The Voice,” Pierce says the slurs have all but stopped. She was voted off the show in March, but like Rada she hopes to keep performing after her army service.

Aynaw also hopes to model and act, and to support youth arts clubs during her year as Miss Israel. She will represent Israel at the Miss World competition in September in Indonesia.

“I feel like a very important person,” Aynaw said. “I don’t usually get up and see myself on all of the TV channels. I’m definitely getting used to it.”