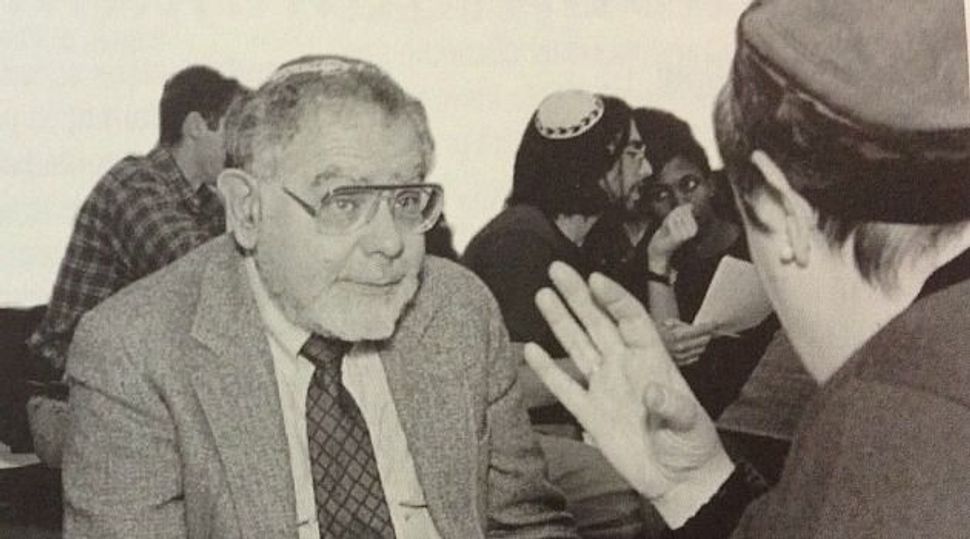 Special Man: Jim Diamond was a Hillel rabbi at Princeton University?s Center for Jewish Life, a scholar, a disc jockey (classical music) and a professor of comparative literature.

When Rabbi Jim Diamond was killed suddenly and unexpectedly, it was just moments after taking leave from the very activity that defined him as a scholar: a Talmud study session.

Our Talmud study group in Princeton, N.J. met every Thursday over breakfast — six men, including three rabbis and three civilians. We usually met at Bon Appetit Gourmet Market and Café, but it was Passover, and hametz was out, so we met on March 28 at one of our homes, across from a local school.

It was after we had finished our study session, as Jim was about to get into Rabbi Robert Freedman’s car to be driven home, that another car approached traveling 60 to 80 miles per hour on the wrong side of the road. In the blink of an eye, it plowed directly into my car, which was parked in front of Rabbi Freedman’s car, and, somehow, Jim was struck — perhaps by the door of the car he was entering, perhaps directly by my own unoccupied vehicle. He died instantly.

The 20-year-old driver, Princeton resident Eric Maltz, was arrested and charged with vehicular homicide. Freedman sustained injuries from which he is expected to make a complete physical recovery. But none of us who were there that day will ever heal from the memory of that morning.

Jim, who was 74, was a very special man — a Hillel rabbi at Princeton University’s Center for Jewish Life, a scholar, a disc jockey (classical music) and a professor of comparative literature.

I have felt for many years that Jim was one of my most special friends. But over those years, I have repeatedly discovered that many others felt the same way about him. I have mentioned Jim to friends from other communities, and frequently I’ve been told a story: He married this one; he changed that one’s life; he was this one’s rabbi. And I would take these stories back to him. Invariably, his memory of each person meant as much to him as their respective memories of him did to them. All these people, and hundreds of others, showed up Sunday, March 31, for his funeral at the Jewish Center of Princeton.

Jim left behind a wife of 50 years from a marriage that was a model of partnership; a brother and a sister; a son and two daughters, and six grandchildren, plus hundreds of students, former congregants and study partners. There is a big hole in the world.

I had been learning from Jim for 17 years. He created a Talmud study circle that met weekly at 7:45 a.m. on Tuesdays in the beit midrash of the Center for Jewish Life. It was there that I saw him for the first time, surrounded by Princeton University faculty and staff, leading a discussion on a text from Tractate Shabbat on what books one is permitted to carry from a burning library on the Sabbath. Books are alive, and when they are threatened with extinction it is most fortunate if someone comes along to rescue them. Jim was such a person. He revived books for those of us fortunate enough to study with him.

The study circle enlarged over the years, migrating to the larger rectangular table of the library. And when Jim retired, it moved to the conference table in the Center for the Study of Religion, and eventually to the Princeton Jewish Center.

For me, and for many others, the most important motivation to show up at the table was to be with Jim. He honored me by including me in more intimate study sessions, including the one that he was leaving on Thursday morning.

After his death, four of us gathered before dawn on March 30 to participate in shomrim, the guarding of the body. I brought along a folder containing copies of some of the texts that we had studied with Jim. I was drawn especially to a teaching of R’Chanina — “Everything is in the hands of heaven except for the fear of heaven.” This text suggests that we have no choice as to whether we will be tall or smart or healthy; but it is up to each individual whether he or she is humbled and in awe when contemplating Adonai.

I wish Jim were here to wrestle with this text. There is a big hole in the world, and there is a war inside me between awe and fury that such an inexplicable and random act could wreak such damage.

When Jim retired from the Center for Jewish Life, I gave him a big hug and told him that he was one of the few rabbis who had never pissed me off. He beamed and looked me in the eye, and said, “I’m not through with you yet.” He still had so much work to do. For the past several months, he was working on translating a novel by S.Y. Agnon, the Israeli Nobel Laurate, that has not yet been published in English. He had many study partners on a wide range of texts, from talmudic to postmodern.

Jim left us in the middle of a sugya, a talmudic recounting of a rabbinic debate. The Gemara included a teaching that Rav Zutra bar Toviya attributed to Rav: “For one walking on a dark path, if he has a torch in his hand, it is like two were walking on that path.” For me, and, I am sure, for many others, walking with Jim was like walking on a dark path with a torch. May his memory be for a blessing.

Neil Litt is an assistant director of Princeton University Press and a former chair of the National Havurah Committee.

This article was changed to correct the date of the crash which was March 28, not March 26.