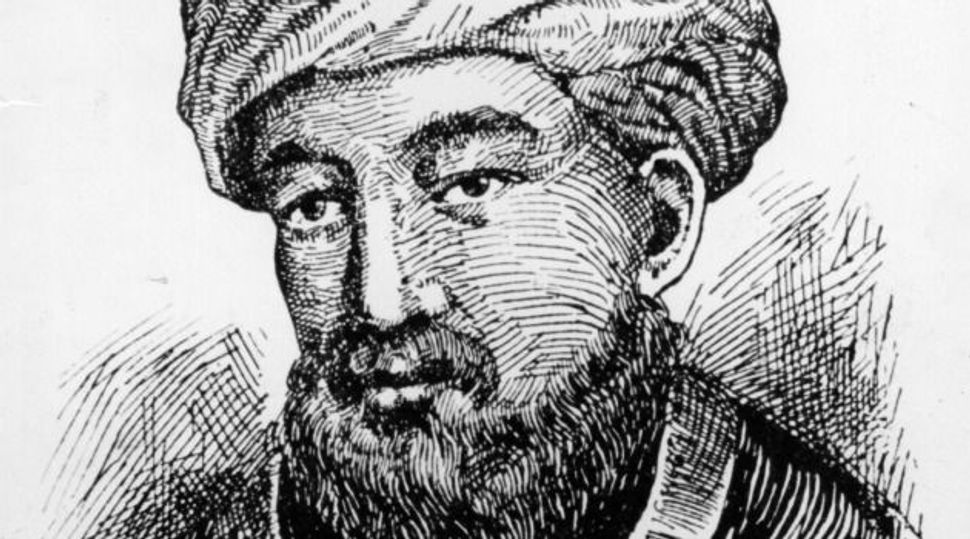 An 800-year-old nutrition plan could become Israel’s next fad diet.

Gil Yosef Shachar, a Jerusalem-based physician, is traveling around Israel spreading the wisdom of Maimonides, or the Rambam, the medieval Jewish philosopher and doctor whose approach to healthful eating has garnered him followers from well beyond the grave.

In his writings, the Rambam gave clear instructions regarding what, when and how much people should eat in order to lead a healthy life. One of his well-known quotes is: “No disease that can be treated by diet should be treated with any other means.”

“We have an entire world of holistic medicine in our own backyard,” Shachar said. “His attitude to medicine is based on three main fundamentals — nutrition, physical exercise and balanced mental state. If you practice physical activity but neglect your nutrition, or eat healthy but do not exercise, or suffer from depression, then eventual ly your health will suffer.”

Shachar familiarized himself with the Rambam’s teachings while he was in medical school at the Technion — Israel Institute of Technology. As a practicing physician, he spent the first 12 years of his career infusing his medical advice with the Rambam’s philosophy. Shachar’s exposure to the Rambam also sparked his interest in Jewish law and ethics and led to his decision to become Orthodox.

In order to spread the Rambam word to more Israelis, two years ago he founded the Rambam Medicine Center. Shachar gives lectures around the country on what the Rambam has to say about everyday living. The topics range from sun exposure, to the perks of vegetarianism, to sleep disorders. The center also produces books and CDs on healthy living, and hosts workshops on detoxification. A few of the more practical directives that Shachar shares with audiences are: Don’t eat three hours before bedtime; wait one hour after rising to eat; don’t drink milk; avoid meat (if you must eat animal flesh, choose chicken); eat small fish, such as the sardine, instead of big fish, like the tuna; choose wheat bread over white; don’t drink as you eat, since it slows digestion, and, the most obvious one, don’t overeat.

Shachar’s interest in the Rambam’s teachings stemmed, in part, from what he saw as the medical field’s disregard of poor nutrition as the cause of or contributor to fatal illnesses. “I realized that modern medicine does not give an answer to chronic diseases, it only relates to their symptoms and tries to diminish them,” he said. “Moreover, during my studies, the issue of nutrition never came up; this is why physicians usually have no knowledge in this field, don’t relate to it or believe in its relevance to our health.”

Shachar isn’t the only one who has attempted to translate the Rambam’s knowledge for modern times. In 2007, David Zulberg published “The Life-Transforming Diet,” based on Maimonides teachings. It is now in its fifth printing.

Shachar seems to have amassed some devoted followers. David Yahalomi, 58, from the Tel Aviv suburb Holon, said that the doctor’s advice on nutrition saved his life. “For many years I suffered from pains in my body, stomach aches and many other symptoms. My life was a living hell, and the doctors wanted to give me some very strong medicines — which I refused to take, since I knew that they wouldn’t solve the problems, only the symptoms.”

Under Shachar’s advice (or rather the Rambam’s), Yahalomi starts every morning with a shake made of greens, a date and an apple, followed by a large salad and a vegetable soup in the evening. For three months he foreswore meat, milk, sugar and bread. “Now I feel healthy,” he said.

Sima Borkovski is a freelance journalist living in Israel. She contributes to WIZO Review as well as various other publications in Israel, Europe and America.