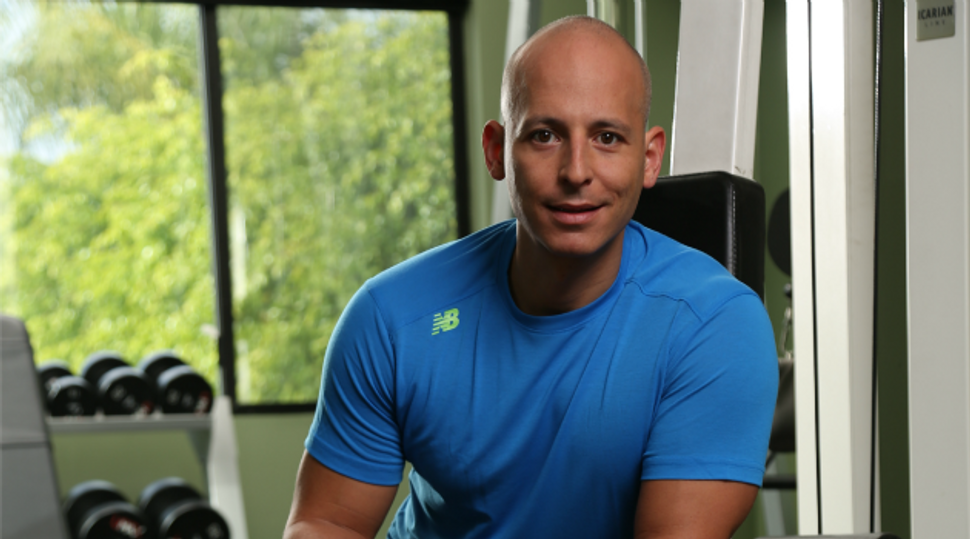 Jessica Simpson, Hilary Duff, Katy Perry, Megan Fox and Amanda Seyfried all share the same Jewish man. And they’re on the record about their ardor for him.

Harley Pasternak, 38, has managed to corner the market on personal fitness for A-listers — and even become a kind of celebrity himself. With private studios in New York and Los Angeles, a crew of six full-time trainers, and a thriving personalized-nutrition business, Pasternak has parlayed his success into a bestselling book (“The 5-Factor Diet”) and a stint as co-host of ABC’s makeover show, “The Revolution.”

Now, Pasternak’s reaching out to the masses with “The Body Reset Diet,” which touts “a program disguised as a quick fix that leads you into a healthy lifestyle.”

The Forward’s Michael Kaminer caught up with Pasternak by phone from Los Angeles, where he moved from Toronto a decade ago.

Michael Kaminer: Jewish culture and families are food-oriented. Was that how you grew up?

Harley Pasternak: Very much. I grew up in a typical Ashkenazi household. My bubbe actually lived with us. She’d make us the traditional colorless, beige, heavy foods: chicken soup, kreplach, gefilte fish, tzimmes. She would make stuffed peppers, kishke and cabbage rolls. She’d also cook flanken soup with marrow bones. I was told if I ate what was inside the bones, it would put hair on my chest. Now we know it’s just an artery blocker.

Luckily, Toronto’s the most diverse city in the world, so we got exposed to all kinds of food. And my mother made great food.

How old were you when you got interested in fitness?

I got into bodybuilding very young — I was 13. My mother took me to a gym — the Young Men’s Christian Association, of all places. I grew up in [the heavily Jewish North Toronto neighborhood] York Mills. Most of the Jews went to the YMCA to work out. And went to St. Andrews School, which was all Jewish.

Because of my workouts, I started eating differently, because I wanted to build a different physique. I learned a lot from fitness magazines, and later from academia, of course.

The introduction to “The Body Reset Diet” makes it sound like you’re targeting people who’ve given up. True?

No, I don’t think it is. I’m targeting two kinds of people. There’s the person who’s really busy and uses time, the number one excuse, as the reason for not being successful at diet and exercise. The other people targeted feel that losing weight is a distant possibility. Research shows that people who lose the most weight in the first week of a weight-loss program are far more likely to stick with it and keep it off. Creating a program that gives people rapid weight loss in the short term, and the tools to continue to keep it off, gives people confidence. It also provides a sense of optimism early on, which will help propel them to stick with the program. And I’d say the third group is attracted to cleanses and fasts — unhealthy quick fixes. I’m giving them a healthy alternative.

Does most kosher food stack up when it comes to the kind of nutritional balance you talk about in the book?

Yes, I absolutely think so. Kosher for Pesach is different — it goes a little overboard. But you can live a healthy life being kosher, and even follow the Body Reset Diet being kosher.

There’s a stereotype about Jews not being athletic. Have you come up against that?

Absolutely. “Airplane” was my favorite movie growing up. There’s a scene where a passenger asks for some “light reading.” The stewardess hands him a leaflet called “Famous Jewish Athletes.” Seriously, I faced a lot of anti-Semitism playing hockey as a kid. It motivated me to play well, and to punch everyone who was anti-Semitic. I was taunted and called names. I’d either beat them with a goal or with my fists.

As Jewish boys, we get raised to think you have to be a doctor or a lawyer. I didn’t have role models who took different paths. It’s nice to know maybe I’ve created another path for young Jewish kids who want to do something they’re passionate about that’s not being a doctor or lawyer.

What’s the biggest difference, in terms of fitness-awareness, between L.A., where you live, and Toronto, where you grew up?