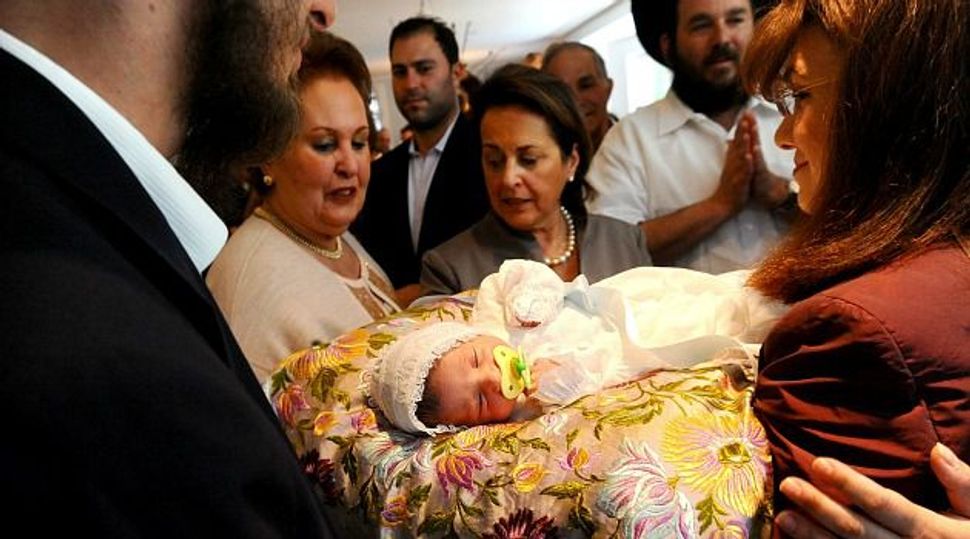 Twisting the Facts: Researchers at the University of Pennsylvania are angry at the way a study on a controversial circumcision rite was used by Orthodox groups. Image by ap photo

University of Pennsylvania officials are crying foul over what they view as the illicit procurement and misuse by several ultra-Orthodox groups of an internal study by Penn researchers of a controversial circumcision rite.

Penn’s Center for Evidence-based Practice never published or released an assessment it conducted earlier this year of evidence from prior studies showing the risk that the religious rite known as metzitzah b’peh poses to infants, the officials say. Yet somehow, ultra-Orthodox groups recently acquired the Penn study for use in a lawsuit opposing regulation of the practice by New York City’s Department of Health and Mental Hygiene.

“The unpublished report was used without our knowledge or consent, and importantly, without proper context,” the University of Pennsylvaia Health System charged in a statement released April 15. The school termed it “regrettable that our evidence review was manipulated for purposes other than advising physicians of important clinical risk factors for newborns.”

In an April 10 email to the Forward, Joel Betesh, project director of the study, also stated bluntly, “I do not agree with the way they are portraying our report.”

The ultra-Orthodox groups claim that the study debunks the medical consensus that infants exposed to metzitzah b’peh, also known as MBP, face a much higher risk of contracting neonatal herpes, a potentially life-threatening disease for newborns.

The three ultra-Orthodox groups — Agudath Israel of America, the Central Rabbinical Congress of the United States & Canada, and the International Bris Association — submitted the Penn paper as evidence in their most recent court brief, filed in the U.S. Second Circuit Court of Appeals on April 8. Their suit challenges a New York City regulation requiring a mohel to obtain a signed consent form from the parents of a newborn before performing direct MBP on the infant as part of a ritual circumcision.

MBP, a procedure practiced by some ultra-Orthodox mohels, involves orally sucking away the blood from the infant’s genital area after cutting off his foreskin during the bris, or ritual circumcision. The practice can infect newborns with herpes simplex virus type 1, according to medical authorities. While not serious for adults, neonatal herpes can be fatal for infants, or cause permanent cognitive or physical damage. A study published in a journal sponsored by the federal Centers for Disease Control found that infants definitely or likely to have been exposed to MBP during circumcision face a risk of neonatal herpes 3.4 times greater than that of newborns outside this group.

Most mohels in this country use a sterile pipette for suctioning the blood. But many ultra-Orthodox mohels consider direct suction of the genital area by mouth to be mandated by the Talmud as part of the religious rite.

Andrew Moesel, a public relations spokesman at Sheinkopf LTD, which represents the ultra-Orthodox groups, rejected sharply Penn’s assertions that his clients had misused the school’s study, or that they had obtained it improperly for use in their court suit.

“We believe that we accurately characterized the intent of the review,” Moesel said, “in particular, underscoring significant limitations of the New York City Department of Health’s non-peer reviewed study on MBP and other literature on the subject. The review demonstrates that any causal link on MBP and type 1 herpes is far from conclusive.”

Moesel added that he received the research paper “from a member of the Penn community” and that there was no subterfuge involved. The study was publicly available on Penn’s website, he said.

Asked to email the link to the paper, Moesel said he would send it to the Forward “right away,” but then failed to do so. He did not respond to several follow-up emails reiterating this request.

In an email to the Forward, Susan Phillips, senior vice president of public affairs at the University of Pennsylvania Health System, wrote that the study “was never available online from us and still isn’t.” Referring to an April 9 press release on the study, also sent out by the ultra-Orthodox groups, Phillips said, “I spoke to the PR contact… and commented strongly on the errors in the release, etc., but we have never sent them anything.”

The press release was sent out by Sheinkopf LTD one day after the ultra-Orthodox groups submitted the Penn study as part of their court brief. It trumpeted the study under the headline, “Ivy League Study Casts Doubt on Claims That Jewish Tradition Leads to Herpes in Infants.” The press announcement claimed that the study conducted at Penn’s Center for Evidence-based Practice “found little evidence to support the claim” that MBP “leads to an increased likelihood of herpes in infants.”

“We have been saying for years that the evidence attacking this religious practice is highly dubious, and now we have world-class doctors agreeing with us,” enthused Rabbi Gedaliah Weinberger, chairman emeritus of the Aguda’s board of trustees, in the press release.

According to Phillips, the press release “mischaracterized our review by implying that there is no causal relationship between circumcision performed with oral suction and the transmission of neonatal herpes simplex virus (HSV) when the full report on the existing evidence concluded this link does exist.”

The review’s conclusions are unambiguous. It says that existing studies on MBP “suggest that direct oral suction performed by a mohel during circumcision may be a source for transmitting HSV-1 infection to an infant,” which can cause death. But the review also indicates that “this evidence base is small and significantly limited.” The researchers call for more studies to amass additional evidence.

Just who initiated the study remains unclear. Phillips said that the Center for Evidence-based Practice conducted it at the request of “another physician in the system,” but she would not identify that person. “I can assure you, he has nothing to do with any of the groups involved in this litigation,” she said.