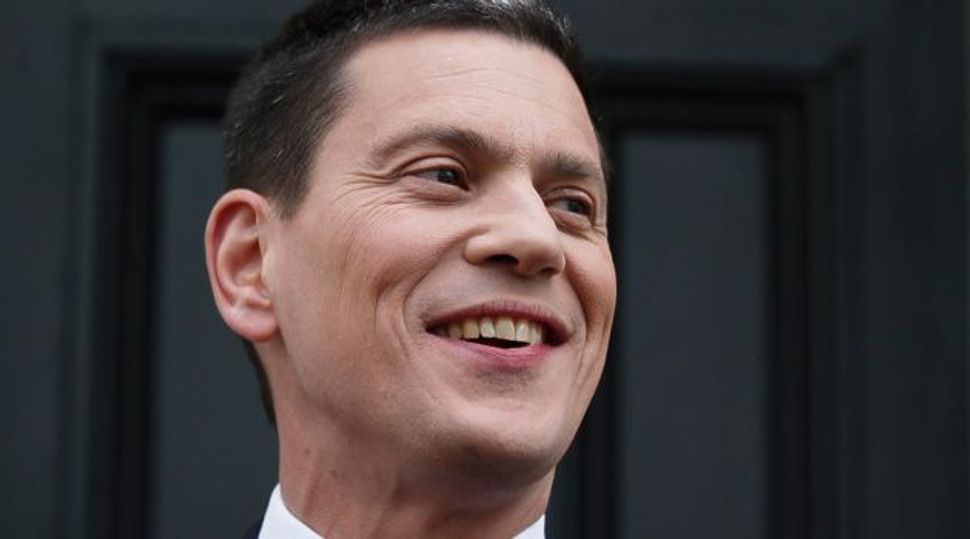 Crossing the Pond: David Miliband will leave his home in the UK for a post at a New York-based NGO this September. Image by Getty Images

David Miliband, the former British foreign minister, takes great pride in his Jewish roots but lists his religion as “atheist.” Moreover, he has devoted his career to secular rather than Jewish public missions.

It’s a very particular kind of Jewish identity — and one that may put him in perfect symmetry with the New York-based International Rescue Committee, the world’s largest private refugee relief group, whose leadership reins Miliband will assume this September.

Like Miliband, the IRC has never viewed its Jewish roots as defining its identity. But they were never out of sight or out of mind. 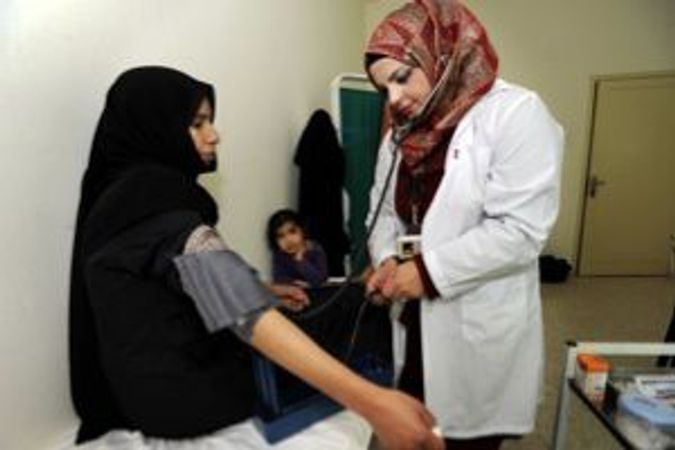 Humanitarian Mission: Although Jews have played prominent roles in the International Rescue Committee, the group has always defined itself as non-sectarian. Image by Getty Images

“Jewish individuals have played a central role in the IRC, but the organization, from the start, defined itself as nonsectarian,” said Edward Bligh, the IRC’s vice president and editorial director. Among those Jewish individuals who shaped the IRC is Albert Einstein, who is credited with having had the idea to found an international rescue organization to help Jews fleeing the Nazi regime as Hitler came to power in Germany. Leo Cherne, a Jewish polymath, chaired the IRC for four decades, and Reynold Levy headed the organization from 1997 to 2002.

The IRC’s board still includes many Jewish names; among them writer Elie Wiesel and labor leaders Randi Weingarten and Jay Mazur.

But the organization’s focus has shifted greatly from those early days, and more recently, so have its sources of funding. The choice of Miliband to lead the IRC, which came in late March, in some ways reaffirms that amid all this, the group’s understated grounding in Jewish values remain undimmed.

The IRC’s recruitment of its new high-profile hire drew attention on both sides of the Atlantic. For British observers, it was the final sign that Miliband was indeed leaving the political arena to his younger brother, Ed Miliband, who won leadership of Britain’s Labor Party in a 2010 contest that pitted the two brothers against each other. In the United States, the selection of the group’s first ever non-American president marked the IRC’s shift toward international sponsorship, following the funds that are already coming mostly from overseas.

David Miliband, 47, served as foreign minister of the United Kingdom from 2007 to 2010. An early adviser to Tony Blair, who repositioned Labor as a more centrist party with a broader appeal, Miliband became one of his top aides after Blair became prime minister. After winning his own parliamentary seat, Miliband received his first Cabinet appointment as environment secretary. He became foreign secretary under Blair’s successor, Gordon Brown.

But Miliband’s stellar career came to an abrupt halt when his brother Ed bested him in his bid to lead the Labor Party. David Miliband immediately withdrew from the spotlight, keeping his seat in parliament but steering clear of top-level politics, until his career change in late March.

Miliband knows firsthand the story of refugees and their struggle. His father, Ralph Miliband, was a leading Marxist scholar who first came to Britain with his own father as a teenage refugee in 1940. His grandmother survived after fleeing Warsaw, Poland, by hiding with a Catholic family in Nazi-occupied Belgium. She was reunited with her husband in England only after the war.

The refugee experience shaped Miliband’s identity more than his Jewish faith did. Miliband has often referred to his sense of Jewishness as being intertwined with his family’s history of displacement. “I am a child of Jewish immigrants, and that is a very important part of my identity,” he said in a 2006 interview with Britain’s Jewish Chronicle “If you try to analyze where I stand politically, it would be very hard to explain that without reference to my roots.”

In his statement accepting his new IRC post, Miliband said he looked forward “to honoring the memory of those who helped my parents by leading the IRC as it continues to offer help today to uprooted people around the world.”

The environment at the IRC could easily match Miliband’s concept of Jewish history.

The organization was founded after Hitler’s rise to power, in 1933, to help Jewish intellectuals flee Germany. Einstein is widely cited as having been the driving force behind the initiative. But during his tenure as president, Reynold Levy searched for evidence of Einstein’s involvement in setting up the group and was unable to come up with any document substantiating the claim.

“Albert Einstein’s association with the IRC is shrouded in the myths of history,” Levy said. Still, there is no dispute that Einstein’s incessant public calls for bringing endangered scholars out of Germany helped crystallize the idea of forming a rescue agency to do so early on during Naziism’s rule.

From the outset, the IRC defined itself as a nonreligious organization out to help those being persecuted for their political, intellectual or religious beliefs — a stance that broadened its range of support. But in the organization’s early decades, developments in Europe meant that its main activities involved aiding Jewish refugees.

After initially focusing on rescuing German Jewish scholars, the group (which at the time operated under other names) turned to saving intellectuals, Jews, political activists and others in Vichy France, fascist Italy and Francisco Franco’s Spain. The American journalist Varian Fry, who is credited with having saved 2,000 to 4,000 Jews and anti-Nazis, ran the group’s rescue operation in France clandestinely from 1940 until his expulsion in 1941.

After the war, the group immersed itself in the resettlement of European refugees returning from the Nazi camps, most of them Jews, until the Hungarian people’s aborted uprising against their Communist rulers in 1956 shifted the IRC’s focus. Now under the leadership of Leo Cherne, the IRC took on resettlement of Hungarian refugees. The move marked a major expansion of the group’s activities, pushing it toward its status today as the largest private international refugee agency in the world.

Cherne, the son of a Romanian Jewish immigrant, was a lawyer, an economist and a journalist. During his 40 years at the group’s helm, he expanded the IRC’s operation beyond postwar Europe to dealing with crisis situations in Asia, Africa and Latin America. Cherne’s work won him the Presidential Medal of Freedom granted by president Ronald Reagan in 1984.

The IRC’s refugee-focused mission was in line with the Jewish community’s own priorities into the 1970s. That, and the many Jews filling its leadership positions, made the organization a welcome cause for American Jewish philanthropists. Many of them still provide significant support for the group’s half-billion dollar annual budget. According to the group’s 2012 annual report, these donors included New Jersey philanthropists Josh and Judy Weston who gave the IRC $7.5 million, and several Jewish organizations, including American Jewish World Service, the American Jewish Joint Distribution Committee and the Jewish Communal Fund, each of which provided the IRC with a check for $1 million.

But today, the group’s European branches provide its main sources of income — a role that evolved for them after they were originally set up to help process refugee requests. The American share accounts for only a quarter of the group’s budget.

The IRC’s work, which now spans 40 nations, includes assisting people uprooted by wars, persecution, civil conflicts and natural disasters. The most attention is now being paid to Syria, where two years of a bloody civil war have led 1.2 million refugees to flee the country and displaced many more within Syria. The IRC has been working with displaced Syrians in refugee camps in Jordan, Lebanon and Iraq and is also providing medical equipment to refugees inside Syria.

Palestinian refugees have begun only recently to receive assistance from the IRC, in the form of a relatively small 2012 educational support program that is now being implemented at 20 West Bank schools. Levy denied that the group’s earlier, decades long decision to channel its resources elsewhere had anything to do with the agency’s Jewish connections.

“[The issue] was dwarfed by other life-and-death emergencies,” he said, such as disasters in the Congo, Rwanda and Kosovo.

According to Levy, the selection of Miliband “will cast the organization as it should be: an international organization that happens to be based in New York.”

But Miliband’s international experience also has its downside. As commentators and officials in aid organizations have noted, appointing a former top British government official to head a humanitarian aid group could put in question the organization’s impartiality. Under Miliband, an article in the Guardian argued, the IRC may have to work harder to convince governments and armed groups in crisis zones that it is not an extension of the British government or of its policies.

As for Miliband himself, “I do not speak Hebrew,” he wrote in an article published in London’s Daily Mail this past December. “But I understand that it has no word for ‘history.’ The closest word for it is memory.” Citing an observation by the former British chief rabbi Jonathan Sacks, Miliband explained: “History is an event that happened some time else to someone else — ‘his story’…. Memory is ‘my story’ — something that is part of who I am.”