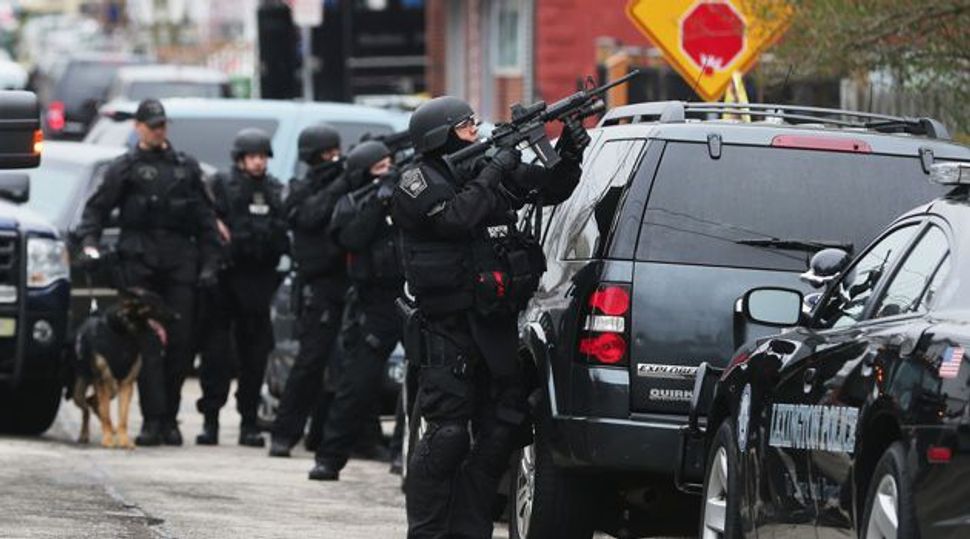 Lockdown City: A manhunt continued throughout the day on Friday in and around Boston. Image by Getty Images

Everything was strange in Boston’s heavily Jewish suburbs on Friday, as it was for residents throughout the area.

But as armies of police combed the area seeking the second suspect in the April 15 Boston Marathon bombing, some Jews experienced something more than their non-Jewish neighbors — sparks, in some cases, of earlier traumas.

“We have lived in Israel or been in places where Jews have been bombed or threatened with terror,” said Rabbi Sara Paasche-Orlow, referring to some members of her community.

Paasche-Orlow spoke while restricted to her home in Newton, Mass. — one of the placid, middle-class suburbs where, along with Boston itself, residents have been ordered to stay inside as police pursue their suspect, who is armed. Among those she serves and with whom she lives and works, Paasche-Orlow explained, “There’s a very different response than your Boston natives who — the closest they’ve come is 9/11.”

The fearful lockdown ended Friday evening when police arrested the suspect in a boat parked in a backyard in the suburb of Watertown, not far from the scene of a shootout hours earlier.

Paasche-Orlow, who heads the chaplaincy department at Hebrew SeniorLife, a network of elder care centers in the Boston area, expressed particular concern about the effect the terrorism attack and police dragnet might be having on some of her nursing home residents who harbor traumatic memories from having survived the Holocaust.

Rabbi Claudia Kreiman, spiritual leader of Temple Beth Zion, a Conservative synagogue in Brookline, Mass., has other memories evoked by the recent terrorist attack, in which three people died and dozens were injured. Kreiman moved to Boston from Argentina, where her mother was killed in the 1994 terrorist bombing of a Jewish community center that killed 85 people.

“This week has been especially hard for me personally, beside what it’s been for all of us here,” Kreiman said. “I haven’t yet put it together, how does it go together with my own personal experience of the [1994] bombing. Its still too surreal to put it together….I’m looking out the windows and I’ve never seen a street so empty in the area.”

Other Jews living in the locked-down suburbs of Brookline and Newton responded with shock on Friday morning. Some had been up all night watching the news. Others were woken by emergency calls at six in the morning, warning them not to go outdoors.

Contacted by the Forward, many residents focused on the immediate details, as news reports circulated of heavily armed police forces combing the suburb of Watertown. Others compared their experiences in Boston this week to experiences in Israel during the Second Intifada. “This is so unprecedented in America, to have this wide a lockdown,” said Rabbi Leonard Gordon, spiritual leader of Congregation Mishkan Tefila, a synagogue in Newton. “We’ll see how this impacts on people’s sense of security.”

The lockdown isrupted the lives of people throughout Boston. Paasche-Orlow said that staffers can’t travel to their work at Hebrew SeniorLife facilities, but that people already on duty have been asked to stay at the homes to continue to provide services to the elders who live there.

In an email sent to his congregants, Gordon noted the momentous nature of what they were all experiencing, and the small rhythms of daily life that stood frozen in place. “More narrowly, for our kehillot (such as mine, Mishkan Tefila in Newton),” he wrote, “this meant cancelled morning minyan, cancelled Nursery School, and disrupted preparations for Shabbat. “

An outgoing voicemail on the phone of JCDS Boston, a Jewish day school in Watertown, where the missing suspect was apparently last seen, simply said that the school was closed for the day.

Virginia Drachman, who lives in Newton, said she and her husband were wakened at 6 a.m. by an emergency phone call recording informing her about the lock-down. “There were practically no cars on the road,” Drachman said. “We saw one car go by and we actually saw two walkers walking, and that was it, all morning.”