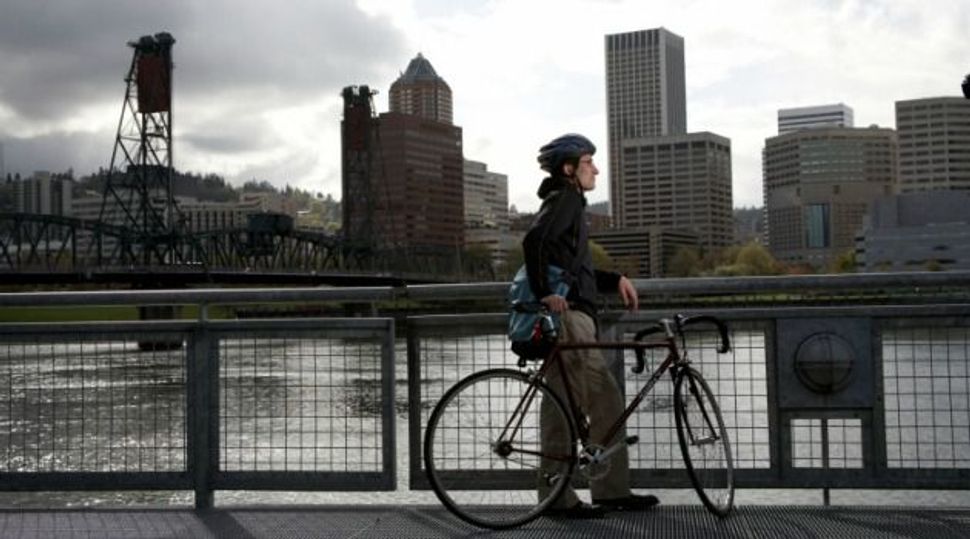 Jessica Bettleheim, a business ethics lecturer at Portland State University and a young Jewish mother, has little time to spare on weekends. Like other professionals her age, she’s busy bonding with her husband and 4-year-old daughter, meeting friends at one of Portland’s many fine restaurants or gardening, a favorite pastime in this verdant metropolis known as the City of Roses.

So when Bettleheim received an email from the Jewish Federation of Greater Portland last month advertising Food for Thought, a festival that included a tour of the Portland Art Museum, she put it on her maybe list.

“The only event that was appealing was the art walk,” she said over coffee during an interview jammed between dropping off her daughter at day care and delivering a lecture at the university. “I might check it out.”

Things came up, however, and she didn’t.

It was a near miss for the local Jewish federation, which has been trying to engage unaffiliated Jews like the Bettleheims ever since a demographic study came out in 2010 showing Portland with about 47,000 Jews – twice as many as previously thought.

The profile of these mysterious Jewish arrivals is murky, as the study provided few details about them. It is widely hypothesized, however, that they are young, secular, liberal transplants from the coasts lured by professional opportunities at major multinationals such as Nike and Intel, or by the city’s casual lifestyle and famed weirdness. Portland, as the joke has it, is where young people go to retire.

The Bettleheims moved from New York in 2009, drawn by the promise of a less pressured lifestyle. The couple routinely hold Shabbat dinners and observe the High Holidays, but they haven’t taken part in any organized religious activities.

“We get home around 5 or 6 on Friday,” Bettleheim said. “The last thing I want to do is drive to the west side and go to shul.”

Jodi Berris, who works at Nike’s sprawling headquarters in nearby Beaverton and organizes gatherings for young Jewish adults, says she’s been trying to involve an unaffiliated colleague of hers for years, thus far unsuccessfully.

“It’s not part of her life,” Berris said. “Still, the survey counts her, her non-Jewish husband and all three kids as Jewish.”

Portland’s Jewish establishment is eager to bring these elusive newcomers into the fold with events like Food for Thought, which featured a smorgasbord of cultural events including a tour of a historically Jewish neighborhood, a party for Israel’s Independence Day and a latkes-hamentashen debate in which the the merits of sweet and savory Jewish dishes were considered (latkes won).

After the survey was released, the federation allocated hundreds of thousands of dollars for engagement events, applied for outreach grants and brought in a Jewish Agency for Israel youth emissary.

“We don’t want one-shot deals,” Marc Blattner, the federation’s president and CEO, told JTA. ”We want lifelong involvement in the Jewish community however way they want.”

The event had a solid turnout – but the crowd was predominantly elderly, not the sought-after newcomer demographic.

“The Jewish youth and Jewish adult communities seem to be two completely separate entities that want nothing to do with each other,” said Justin Chilton, 25, one of the few younger people at the event. “Trying to bridge that gap is really weird and seemingly weirdly impossible.”

One challenge is geographic. Nearly all the community’s institutions are west of the Willamette River, while most of the unaffiliated Jews are believed to be on the city’s hipper east side.

That is beginning to change. Shir Tikvah, a progressive synagogue, was the first Jewish place of worship to open on the east side of Portland. Chabad recently followed suit with a new outreach center in the trendy northeast. Meanwhile, Blattner said the federation is considering opening a Jewish day care center there.

“The river becomes a barrier to people,” Blattner said. “We do not have formalized Jewish institutions on the east side of town, but we’re in discussions about that and the No. 1 thing we’re looking into is a Jewish preschool.”

It’s unclear whether enough east siders are prepared to spend on the funding needed for such an endeavor, but Blattner hopes events like Food for Thought might plant the seeds for change. If not, and the gathering speaks only to the core group of committed Jews in Portland, he’s fine with that, too.

“I hope that [the Jewish newcomers to Portland] know that when they do decide to come to the Jewish community,” Blattner said, “we will be waiting here with our hands open.”