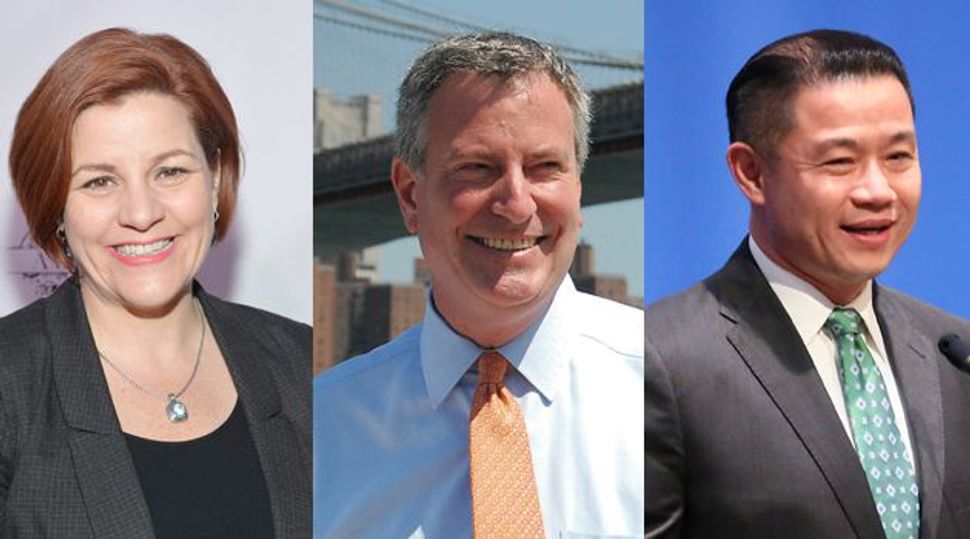 No Strong Stand: New York mayoral candidate John Liu, right, opposes the city?s requirement of parental consent forms for metzitzah b?peh. Others, including frontrunner Christine Quinn, left, back the regulation, but say the city should do better outreach to the Orthodox community, while Bill de Blasio, center, wants to find a solution to appease both parties. Image by Getty Images

All the top Democratic candidates vying to become the next mayor of New York City are calling for greater dialogue between Orthodox groups and city officials concerning the controversial Jewish circumcision practice known as metzitzah b’peh.

But among these leading Democrats, only City Comptroller John Liu says he would outright abolish the city’s regulation of the practice.

In contrast, Joseph Lhota, currently the top Republican candidate for mayor, says he supports the regulation, which is bitterly opposed by several major ultra-Orthodox organizations.

The new regulation, which came into force this past January, requires a mohel to obtain a signed consent form from a parent before he may perform metzitzah b’peh, or MBP. The regulation seeks to ensure that parents are aware of the procedure’s health risks — in particular the greater danger that medical authorities say the baby runs of contracting neonatal herpes, which can be life threatening or cause permanent physical or cognitive damage.

In a statement provided to the Forward, Democratic front-runner Christine Quinn, the city council’s current speaker, said the use of signed consent forms to perform MBP “protects religious freedoms” and is the “right policy,” but that the city’s health department “must do a better job in the future with its outreach on sensitive issues in which public health and religious practices intersect.”

Quinn’s top challenger on the Democratic ballot, Bill de Blasio, said that while the city “has a solemn duty to protect the public health, and we will never compromise on that,” Mayor Michael Bloomberg “was wrong to simply dictate to a community on a matter of religious tradition.” De Blasio added that he would find a solution “that protects the health of newborns and allows freedom of religious practice.”

The city department of health did not respond to requests for comment. But prior to approving the consent form in September, the city held public hearings on the proposed regulation this past July and Bloomberg met with ultra-Orthodox leaders.

Still, ultra-Orthodox Jews said that they have not had enough discussion with city authorities on the health risks of MBP, a procedure in which a mohel orally sucks away the blood from an infant’s genital area after cutting away his foreskin during circumcision. Most mohels who are not ultra-Orthodox use a sterile pipette for this procedure. But many ultra-Orthodox rabbinic authorities say the Talmud forbids this.

Currently, a group of pro-MBP plaintiffs are suing the city over their right to perform MBP.

Lhota, the former chairman of the Metropolitan Transportation Authority and the current favorite among GOP candidates, publicly said in early April that using the signed consent forms was “a reasonable approach” to tell parents what the risks are.

One of Lhota’s challengers, John Catsimatidis, supported the regulation more directly. A representative for the campaign of the billionaire grocery store magnate told the Forward that Catsimatidis “believes a mohel’s work should be regulated by the health department, just like a variety of other procedures are,” and that “we understand the religious implications, but there also has to be a balance with the health implications.”

Recently, Liu challenged Bloomberg’s decision, telling a Forward reporter that he opposed the signed consent forms and was “not in support of the changes that Mayor Bloomberg made.”

“For thousands of years, this has been a practice that has been observed by people,” Liu said. “As with most procedures, some risk is inherent. But I would certainly defer to the rabbis on this, as opposed to thinking that, well, we know better after thousands of years of this practice.”

Other candidates have made public statements directly to Orthodox Jewish audiences, criticizing the enforcement of the MBP regulation. In a talk with an Orthodox Jewish crowd in Brooklyn that was posted online in March, Democratic candidate Bill Thompson was told that any mayoral candidate who didn’t take a stand against regulation of MBP would be a candidate for whom people wouldn’t feel comfortable voting. In response, Thompson said, “The government needs to respect the religious beliefs of people.” Thompson added that he had heard there was no discussion between members of the Orthodox Jewish community and the city, and that he would be “absolutely willing to sit down and talk” about balancing safety and religious practice.

Another Democratic candidate, Erick Salgado, a minister from Staten Island, gave a speech to the Rabbinical Alliance of America and called MBP “a practice that was commanded by God,” one that had been practiced “since God told Abraham to do so.”

According to a recent New York Times article, there could be up to 30,000 Orthodox Jewish votes available in the Democratic primary this year. Quinn leads a majority of early polls. Primaries in the overwhelmingly Democratic city will be held September 10.

Sal Albanese, a former city councilman and Democratic candidate, also advocated discussion. In a statement provided to the Forward, Albanese said: “I think we’ve got to stop making this a good guy-bad guy issue. Everyone on both sides is trying to do what they think is best for the well-being of our kids. While I have my concerns, I’m open to bringing doctors and community members to the table to revisit the current policy.”

This year there have been two reports of infants infected with herpes after circumcision. Since 2000 there have been 13 reported cases, with two of the infants dying shortly after becoming infected.