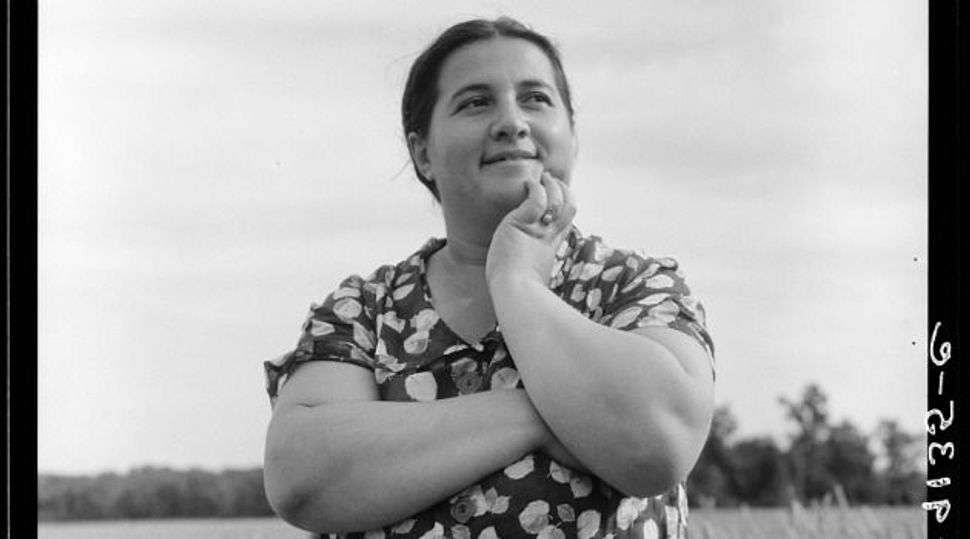 Jewish Mother: Dorothea Lange snapped this 1936 photo of ?Mrs. Cohen,? the wife of a Jewish farm manager. Image by Dorothea Lange/Library of Congress

With Mother’s Day around the corner, we asked you to share your take on the wonderful, complex, loving and occasionally crazy-making entity called the Jewish mom — in exactly six words. Why so few?

Legend has it that Ernest Hemingway was once challenged in a bar bet to write an entire novel in just six words. As the story goes, Papa wrote, “For sale: baby shoes, never worn.” In 2006 I asked the members of the online storytelling community [Smith Magazine][2] to describe their lives in six words; I called it the “Six-Word Memoir.” I didn’t know what to expect, but it turned out that the limitation actually catalyzed creativity instead of inhibiting it.

More than six years and 700,000 (very) brief life stories later, teachers and students, preachers and rabbis, veterans groups and speed-dating services have used the form to activate conversation, spark imagination or simply break the ice. In short, the six-word form has become a way to get to the essence of anything.

But can you actually sum up Jewish life using only six words? After all, we’re not only a wordy people, but a complex one, too. And yet, defining our relationship to Judaism in so few words has proved a great way to get to the essence of the Jewish experience, as I found out when I put together the latest book in the series, “Oy! Only Six? Why Not More?: Six-Word Memoirs on Jewish Life.” In a book that contains 360 personal takes on Jewish life, there is no topic more popular than family, and no family member mentioned more often than Mom. The next most popular topic was “chicken,” which, as we know, is the most reliable weapon in the Jewish mother’s arsenal.

Ultimately, the six-word constraint asks us to define both who we are at our core and what matters most. It’s clear from the hundreds of you who responded that we often need only one word: Mom.

After the jump are 12 of our favorite responses from Forward readers:

Leaned out, leaned in, leaned on.
— Gabrielle Birkner, 34, New York, about Roni Lang

You shtopt my soul with character.
— Edgar Weinstock, 71, Brooklyn, about Libby Weinstock

She is lox to my schmear.
— Lauren Rosen, 42, New York, about Doris Rosen

My father is the Jewish mother.
— Annette Powers, 40, Brooklyn, about Edward Powers

You want I should worry yet?
— Rachel Gorman, 33, Morrisville, Pa., about Louis Astern

Visit forward.com in mid May for our Father’s Day six-word challenge. If we pick your six-word submission on your father or grandfather, you’ll win a copy of “Oy! Only Six? Why Not More?: Six-Word Memoirs on Jewish life.”