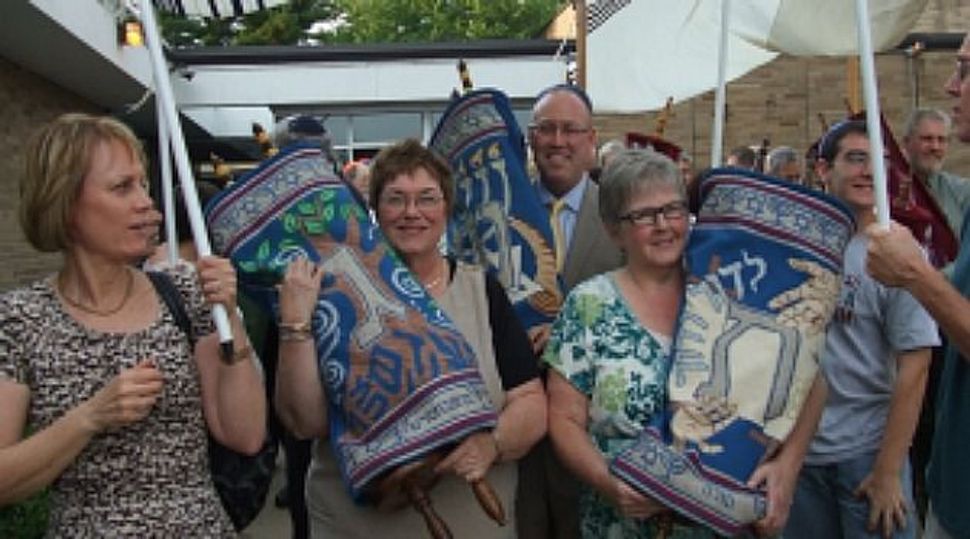 The Jews of Corpus Christi knew a decade ago they had to act fast to save their two synagogues.

With at most 1,000 Jews left in the Texas town and only 60 families making up its membership, the 60-year-old Conservative synagogue was in shaky financial shape. So in 2005, B’nai Israel Synagogue merged with Temple Beth El, a Reform shul, to form Congregation Beth Israel, combining customs and sharing sacred spaces to preserve Jewish life in an area that saw its heyday around World War II.

The combined synagogue, and a small but growing number of others like it, makes a concerted effort to be inclusive despite denominational differences in liturgy and theology. Friday night services are tailored to Reform-minded members, while Saturday morning is conducted in the more traditional Conservative style, according to Kenneth Roseman, Beth Israel’s Reform-ordained rabbi.

Families marking a bar or bat mitzvah can choose which day and denomination they want for their celebration. Members even used furnishings from the old Conservative synagogue in a small chapel and put up some of the old building’s stained glass in the new congregation’s social hall.

Across the country, scores of synagogues have overcome denominational differences to merge formally, share space or otherwise collaborate, often due to financial hardships wrought by shrinking Jewish populations. Shifting demographics and a challenging economic environment have led synagogues to consider remedies that previously were unthinkable, said Rabbi David Fine, the rabbinic director of the Union for Reform Judaism’s small congregations network.

“Many congregations worked hard for years to distinguish themselves,” Fine said. “It wasn’t so much ‘who are we’ but ‘who are we not?’– looking at the other place across town. Now it’s more ‘what do we have in common?’ ”

That kind of thinking was evident in the merger of the Reform Temple Beth El with Congregation Eilat, a Conservative synagogue in Southern California that was struggling with a significantly reduced membership. In 2010, the congregations merged formally with about 80 percent of Eilat’s 120 families joining the 650-family Beth El. Eilat members were granted board positions, one of Beth El’s kitchens was brought up to Conservative kosher standards and differences on issues such as music on Shabbat and patrilineal descent were followed in each denomination’s services.

“I think the success of it is measured by the fact that the lines are totally blurred now,” Welland said. “We’re one congregation; we’re one community.”