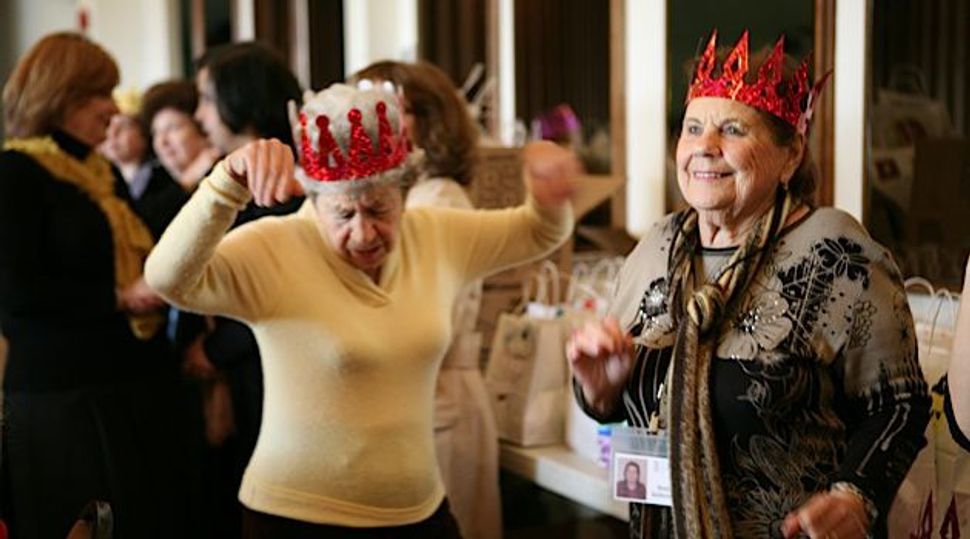 My 92-year old grandfather, a Holocaust survivor from Lodz, Poland, sleeps in my childhood bedroom in Los Angeles. He has adorned its walls with photos of the dead: his wife, wearing a borrowed gown in a postwar wedding portrait; a daughter, beaming at her high school graduation, and other friends and family members. There are also photos of the living, including his nine grandchildren and great-grandchildren. Three times a week he receives dialysis while listening to cantorial music on his iPod; each four-hour treatment buys him a few more days to live. He doesn’t drive. He eats a restricted diet. He relies on others for almost everything. He considers himself to be a burden, no matter how many times he is told otherwise.

“Our people don’t walk anymore,” he said, acknowledging that the average age of survivors is nearing 85. “There are so few of us left. Now we sit and think about the same things over and over. We think about the families we lost and the youth that was taken from us. It never leaves our minds.”

If the final task of a long life is to reflect on the past and conclude — with satisfaction — that the years were well lived, then elderly Holocaust survivors face a painful challenge: How to fill in the missing pages ripped violently from their life stories? About 120,000 survivors lived in the United States in 2011, the most recent year for which the Claims Conference — the conference on Jewish Material Claims Against Germany — provides demographic data, though Jewish social work organizations estimate about 10% attrition to death each year, bringing the number closer to 100,000 for 2013. Along with higher rates of poverty, isolation and re-emergent trauma, survivors often feel the strains of old age more acutely. Their families, typically smaller than average Jewish American families, struggle daily with how to best provide care, comfort and dignity to people who never got to supply the same for their own parents.

Like most survivors, my grandfather, Nathan Zelmanowitz, never knew his grandparents. He fled Lodz for Siberia with one sister after a Polish Nazi sympathizer knocked out his front teeth in December 1939. Soon after, Lodz became a ghetto, and after it was liquidated, my grandfather’s mother and two other sisters perished in the Chelmno concentration camp. Because his father died when he was still a boy, my grandfather apprenticed himself to a tailor in Lodz at a young age. He later found steady tailoring work for the Russian army during the remainder of the war. After beginning a new life in America, he opened a dry cleaning and tailoring business in New York City’s Greenwich Village, where he worked until he retired to Los Angeles, then Miami. He never saw his parents reach old age; this is his first experience with life in one’s 80s and 90s.

One of the most challenging decisions facing the families of survivors is whether or not to place a parent in a skilled nursing or live-in facility.

“You might feel like you’re incarcerating them again, and you know that trauma-related symptoms could manifest,” said Jenni Frumer, associate executive director of Alpert Jewish Family & Children’s Service in West Palm Beach, Fla. “As a child of survivors, you only want to make your parents comfortable, to make up for all they’ve been through, to be everything to them.”

If placement in an assisted-living or skilled nursing facility isn’t necessary (or affordable), social workers aim to keep survivors “aging in place” — that is, living in their own homes with various degrees of external aid.

My grandfather is a rare case. Since my grandmother’s death, in 2008, he has shuttled between homes in Los Angeles and Miami and battled illness after illness, all the while attempting to maintain a social life. He met his energetic and doting 86-year-old Russian Jewish girlfriend at a party in 2009. She takes care of him when he visits Florida, but it’s not a job she can do year-round, so his home base is in L.A. with my parents.

Yet very few survivors live with their adult children; instead they rely on outside help for cleaning, cooking and health care. The New York-based Selfhelp Community Services Inc. provides survivors with in-home health aides up to four hours a day, five days a week. That’s the most care the group can afford to provide to its more than 5,000 clients. “If we went to Brooklyn and put up signs in every kosher butcher shop, we’d have more clients than we could deal with,” said Elihu Kover, vice president of Selfhelp’s Nazi Victims Services.

For historically self-reliant survivors, even accepting a home-care worker is a difficult psychological step. Rigorous sensitivity training helps workers avoid triggering some survivors’ fear and trust issues and allows them to accommodate, not fight, their reactions. Uniforms, religious symbols, classical music, a doctor’s touch, showers and even prolonged goodbyes may set off survivors, according to social workers and psychologists. Paula David, a gerontology professor at the University of Toronto and former coordinator of the Holocaust Resource Project at Baycrest Centre, in Ontario, recalls a staffer at an assisted-living facility who surreptitiously replaced the stale dinner rolls that a survivor insisted upon keeping in his nightstand every night with fresh ones so that they wouldn’t go bad.

While invitations to weekly Cafe Europa events give many lonely survivors something to look forward to, my grandfather’s excitement is often short-lived. Last October, the Jewish Family Service of Los Angeles chartered a party yacht for its two Cafe Europa groups and took the survivors on a dinner cruise around the marina, complete with a live band and gift bags. It was all he could talk about for a few days. Then reality set in: another week of long hours in a dialysis chair, no peers to spend time with and an endless loop of bittersweet memories.

Sometimes, family can try to pick up the slack: Children often take responsibility for their parents’ care and navigate the complex emotions that come with that responsibility. My mother’s relationship with her father is tense and protective. She readily admits that she’d feel like a failure if she couldn’t continue caring for him. Meanwhile, he feels frustrated by his lack of independence but acknowledges that living with her is his best option.

My mother’s parents taught her to stoically cope with almost any task. But the job of making my grandfather feel at ease may be an impossible one. And my grandfather, who has lived through so much unknowable tragedy and started over countless times, now rails against the physical limitations that will ultimately prevent him from doing so again. So he sits, waits and hopes for opportunities to tell his family about his life. “I don’t talk much, but I try to think about my grandchildren as much as I think about the bad things,” he said. “I don’t know how long I’ll be here. And I want to be among my own.”

A technology journalist based in Los Angeles, Rachel Rosmarin is the granddaughter of four Holocaust survivors. Follow her on Twitter at @rachelmrosmarin.