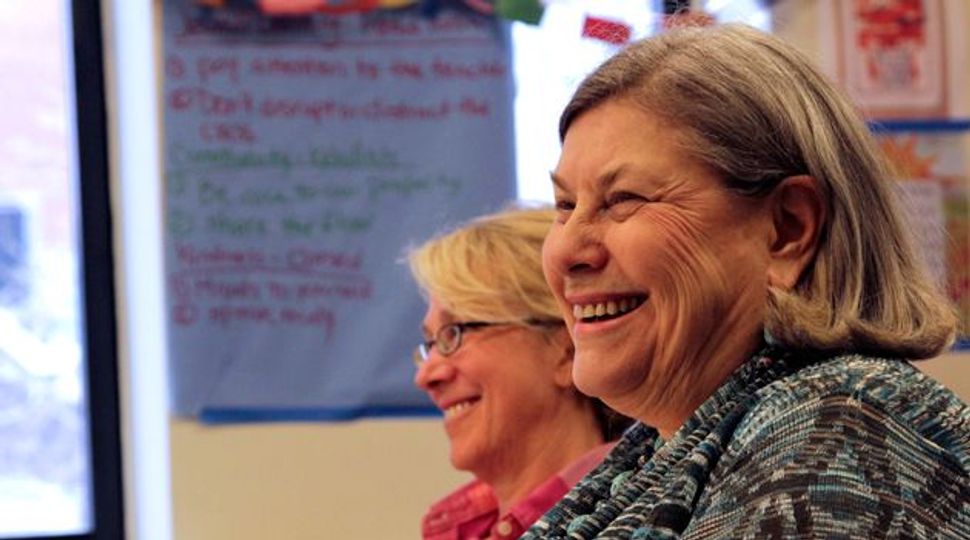 In a little more than a year, all that has changed with his involvement in a pilot project called Wise Aging. Sharfstein is one of 11 people, ranging in age from 61 to 72, who have been meeting at Manhattan’s Central Synagogue to discuss their respective transitions into older adulthood.

“It’s not a kvetch session,” said Sharfstein, 67, but a chance for people to explore, through the lens of Jewish wisdom, everything from their postretirement identity to dealing with new physical limitations.

Unlike much of the communal programming geared toward those older than 60, Wise Aging isn’t about keeping seniors busy with cultural activities or continuing education. Instead, it’s about doing reflective work and preparing oneself for late life, when there is greater frailty and greater loss.

“We’re helping people transition from doing and accomplishing and making their mark on the world to being more present in the world — whether they’re seeing a beautiful flower in Central Park or looking into their grandchildren’s eyes,” said Rabbi Marion Lev-Cohen, who as Central Synagogue’s Rabbi for Community Engagement selected the participants for the pilot.

Lev-Cohen, together with Rabbi Rachel Cowan, who is spearheading the Institute for Jewish Spirituality’s Wise Aging initiative, facilitates the group of eight women and three men. Some participants are married, others are divorced or widowed; some are retired or semi-retired, and others are still working.

The lunchtime meetings run anywhere from 90 minutes to two hours, and include guided meditation and facilitated discussions on such topics as body image, gratitude, repairing relationships, living with loss and considering one’s legacy. There are often smaller breakout groups around Jewish text study, or sharing and listening exercises.

“Whatever is said in the room stays in the room, and we all take that very seriously,” said Laura Rothschild, 64, a married mother of a college-age daughter.

In hopes of getting other synagogues and Jewish centers to begin Wise Aging groups of their own, Cowan and the educator Linda Thal, who leads the Yedidya Center for Jewish Spiritual Direction, are developing a curriculum and resource guide. Chapters include meditations, readings from secular and Jewish texts — written by geriatricians, poets, Martin Buber and the Baal Shem Tov alike — and discussion and journaling prompts.

Cowan and Thal have received about $30,000 from the Covenant Foundation and the Harold Grinspoon Foundation to create the guide, which they hope to complete this fall. They are currently seeking additional grants to train Jewish leaders to use the Wise Aging curriculum.

Cowan said that she and Thal relied heavily on Harvard psychiatrist George Vaillant’s research on “successful aging.” Vaillant found that those who are older than 80 and are living with joy “had a spirit that enabled them to maintain close relationships, to be optimistic, to not live in the past with regret or nostalgia, to not look to the future with fear,” Cowan explained.

With those findings in mind, the Wise Aging curriculum focuses on developing the kind of spiritual reserve that bolsters people as they age.

Cowan, former executive director of the Institute for Jewish Spirituality, sees the program as a prospective boon for synagogues. At a time when congregations are bemoaning a drop-off in membership post bar mitzvah, Wise Aging provides a chance to engage the 20% of American Jews older than 60.

Success will require a paradigm shift, given the communal focus on a younger cohort. “The Jewish community is in a mode of a great deal of anxiety about the future,” and has been pouring money into creating Jewish identity-building experiences for children, teens and young adults, Cowan said.

And while the community also devotes significant resources to end-of-life nursing care, “there’s a whole generation of people for whom there’s not any kind of educational focus on this life stage,” Cowan said, referring to aging baby boomers.

Wise Aging is an outgrowth of a Jewish adult study group, Vetaher Libenu — Hebrew for “purify our hearts” — that has been meeting monthly for years at Cowan’s home.

One participant, Karen Frank, 62, said that this kind of shared learning is a natural fit for boomers, a generation of activists and spirituality seekers who are inclined to discuss topics that their own parents found to be taboo. “They are looking ahead, as they see their parents aging, and they want to do this intentionally,” she said.

At Central Synagogue, the Wise Aging group, which began in January 2012, had planned to meet eight times over several months. But as the sessions neared an end, the group had grown so close — and felt that there was so much unfinished business — that it tacked on an additional six sessions, and then four more after that. The program is slated to end in June, but members have discussed staying together in some form.

Many of the Central Synagogue participants say Wise Aging has been profoundly transformative. Rothschild said that it has made her a better listener and a more patient person, and that it has crystallized the importance of her ongoing volunteer work at a transitional housing program for drug abusers. “The group has made me focus not only on continuing that work, but on finding other ways of engaging with people,” she said. “As I get older, that’s going to be important.”

Sharfstein, who has been married for 43 years and has two children and two grandchildren, said that the group inspired him to re-enroll in a training program to become a health care chaplain. And after years of letting workplace success define him, Sharfstein said, he has finally embraced the idea that he can “stop striving” in the traditional sense. “What I need to strive for now,” he added, “is a greater understanding of self.”

Gabrielle Birkner is a contributing editor at the Forward.