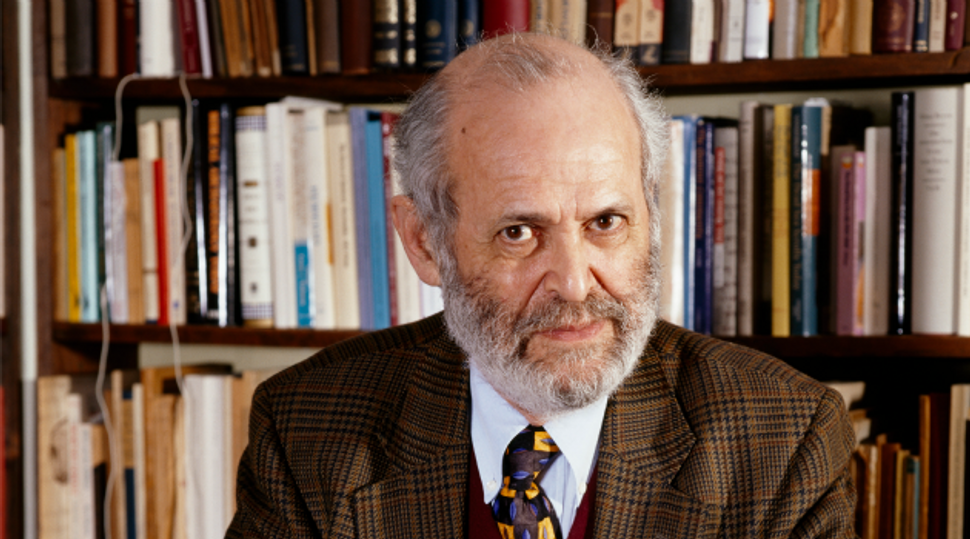 No Running From Faith: Bible scholar Geza Vermes converted to Catholicism to avoid the Holocaust. But he returned to his Jewish roots later in life. Image by getty images

The renowned Hungarian Jewish biblical scholar Geza Vermes, who died of cancer May 8 at age 88, disproved the old canard “You can’t go home again,” at least when it comes to Judaism.

Born in the town of Makó in southeastern Hungary in 1924, Vermes was 7 when his family converted to Catholicism in what would prove a failed attempt to sidestep anti-Semitism. The scholar, whose parents were murdered in Nazi concentration camps, told Rachel Kohn of the Australian Broadcasting Corporation in 1999: “In fact, I never was anything but a Jew with a temporary sort of outer vestment. I realized I ought to recognize my genuine identity.”

Vermes’s outer vestment included attending a Catholic seminary; by 1942, when he was of college age, Jews were no longer accepted into universities in Hungary, which had allied itself with the Nazis. Refused admission after graduation into the Dominican or Jesuit orders because of his Jewish origins, Vermes was accepted by the Brothers of Sion, a French/Belgian community focused on praying for the Jews.

In Paris, Vermes studied with the eminent Jewish scholar Georges Vajda, a graduate of the Rabbinical Seminary of Budapest. When the manuscripts that eventually became known as the Dead Sea Scrolls were first made public, in 1947, Vermes was fascinated. Starting in 1950 he began translating the texts, writing what became in 1953 the first-ever doctoral dissertation on the subject. In 1962 he completed a first translation of the Dead Sea Scrolls, later much augmented.

But his publisher, Penguin, irked Vermes by featuring on the book’s cover a Dead Sea Scroll fragment reproduced upside down.

Also in Paris, Vermes befriended and worked with Paul Demann, a scholar, like him, of Hungarian Jewish origins. Together with a third collaborator, Renee Bloch, they battled doggedly against the anti-Semitic content in Catholic education and ritual of the time. The Second Vatican Council would later accept many of the trio’s theological arguments.

Vermes also wrote a series of books looking at the Jewish roots of the Christian messiah, including “Jesus the Jew,” which, as he told Kohn, described Jesus as a “totally Jewish person with totally Jewish ideas, whose religion was totally Jewish and whose culture, whose aims, whose aspirations could be understood only in the framework of Judaism.”

By then, Vermes had rediscovered his own Jewish identity. Attending a 1954 international conference in Oxford, he fell in love with Pamela Hobson, a scholar of Jewish philosopher Martin Buber’s work who was then married to a professor at Exeter University. For Vermes, discovering England and a new love coincided with leaving the Catholic Church in 1957. The following year, Hobson’s marriage was dissolved and she married Vermes. Hobson would collaborate with Vermes on a series of books before dying in 1993 at age 74.

Despite reasserting his Jewish identity, Vermes remained a skeptic about organized religion. Communing with nature was his chosen form of spiritual activity. Nevertheless, in 1970 he became a member of London’s Liberal Jewish Synagogue..

In 1965, after teaching biblical Hebrew for several years at Newcastle University in the north of England, Vermes joined the Faculty of Oriental Studies at Oxford University. He eventually became the venerable school’s first professor of Jewish studies, a position he retained until his retirement in 1991.

For decades thereafter, Vermes fulfilled the role of civilized arbiter in the sometimes harsh world of scholarly controversies surrounding the Dead Sea Scrolls. In this guise he made a cameo appearance in 1966 in Edmund Wilson’s “Israel and the Dead Sea Scrolls” (Transaction Publishers).

These sober duties notwithstanding, Vermes retained a ludic spirit. In 2004, when journalists from The Guardian invited him to a press preview of Mel Gibson’s “The Passion of the Christ” to judge its authenticity, he chortled derisively, “It’s quite obvious that none of the actors could speak Aramaic.” As one Guardian journalist put it, Vermes “knew hokum when he saw it.”

Vermes would also charm audiences by recounting how, at age 5, his stepson from his 1996 marriage to Margaret Unarska, a Polish scientist, would proudly claim that Vermes had “written” the Dead Sea Scrolls. While not quite that ancient, Vermes was a respected elder in the world of biblical studies whose warmth, humor and sense of Jewish identity will be missed.