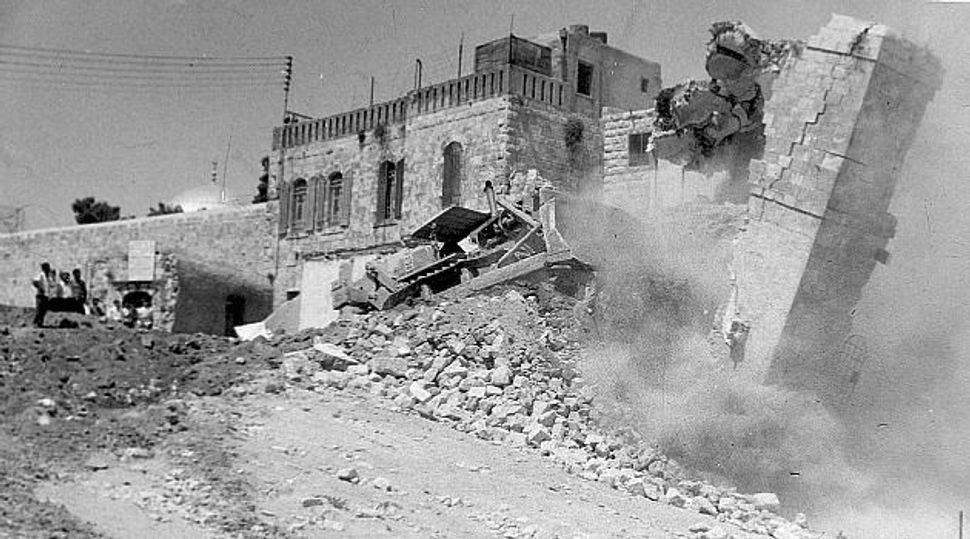 Forced Removal: Hours after conquering East Jerusalem in the 1967 war, Israeli authorities demolished the Arab Mughrabi neighborhood in the shadow of the Western Wall. Those who once lived there still mourn the loss of their homes. Image by getty images

Many Israelis marked the 46th anniversary of Jerusalem’s reunification, as they see it, with the fanfare that has become a staple of Jerusalem Day, the holiday first declared by the government in 1968 to mark the historic event.

The May 8 celebration, which Israel’s chief rabbinate has also declared a religious holiday, was punctuated by performances, including the annual “march of the flags,” a large procession by nationalist Jewish youth through the Arab neighborhoods of East Jerusalem.

“We are celebrating the reunification of Jerusalem, the nullification of the border,” Jerusalem Deputy Mayor David Hadari told the Forward. “It was previously impossible to reach the Western Wall, but it was liberated and the Temple Mount is in our hands.”

In his comments, Hadari recalled the divided city that existed before the June 1967 Six Day War, when Israel took control of the city’s Eastern sector, ruled until then by Jordan and populated exclusively by Arabs. Today, Hadari noted, Jewish neighborhoods are expanding all over this sector.

But not everyone thinks there is cause to rejoice. The festivities cut out the Palestinians, who make up 39% of Jerusalem’s population. Unlike the city’s Jewish residents, Arab Jerusalemites face logistical and legal barriers to moving into the city’s other, Jewish sector. And many cannot find housing in their own sector of the city due to planning policies that have been labeled discriminatory by civil rights groups.

“They celebrate and we cry,“ said Mohammed Ibrahim Mawalid, 85, a resident of the Old City. “They celebrate the liberation of Jerusalem as they view it. But we remember the disasters.”

One of the disasters that still haunts Mawalid is a mass demolition that eradicated his old Palestinian neighborhood. It was carried out at Judaism’s holiest site on the last day of the Six Day War and the first day of the ceasefire. It was just a few days after David Rubinger shot his iconic picture of young awestruck Israeli soldiers standing before the ancient stones at the Western Wall just after having taken over the area.

The soldiers then were standing in the Mughrabi Quarter, which encompassed most of what is today the long, wide plaza in front of the Western Wall. Its destruction is an event either unknown or repressed by most Israelis and Jews who visit the Kotel. It is deleted from public discourse about the Old City. But for some Palestinians it is still a sore wound.

Mawalid’s home once stood in this area, along with 135 other buildings, including three mosques and two zawiyas, or pilgrim hospices. Palestinian historians say that some of the Mughrabi Quarter buildings were more than seven centuries old, dating back to the time of Saladin’s son, al-Afdal. But Israeli bulldozers erased them June 10 and June 11, on the orders of Israeli Chief of Staff Moshe Dayan, to enable large numbers of worshippers to come to the Western Wall for Shavuot prayers the following week. Now, not even a plaque marks the site. It is as if the Mughrabi Quarter never existed.

Today, Mawalid is a frail man whose son works in employee recruitment for the California state government in Sacramento. He has other children in Oman and Morocco. But in 1967, Mawalid held the post of mutawalli, the Jordanian government official responsible for the Islamic properties in the quarter. This provided modest earnings. He also supervised a cafeteria at the offices of the United Nations Relief and Works Agency.

Mawalid moved to the Mughrabi Quarter in 1949 after fleeing the village of Bir Ma’in (on the site of what is now the Israeli town of Modi’in) during the Arab-Israeli war a year earlier. He says he had to leave the village because of Israeli artillery bombardments.

In the Mughrabi Quarter, Mawalid’s seven-room house, about 100 meters from the Western Wall, was home to 15 people, including his mother, brothers, wife and children. The house was white stone and about 250 years old, he said.

According to Mawalid, some 1,500 people lived in the Mughrabi Quarter, though other estimates put the total at around 600. Many, like Mawalid, were originally of Moroccan ancestry. After the demolition, the refugees dispersed to other locales in the Jerusalem area and to Jordan and Morocco.

On the night of June 10,1967 — just as Israel was consolidating its seemingly miraculous victory over Egypt, Jordan, Syria and other Arab armies — Israeli bulldozers began demolishing the Palestinian houses closest to the Western Wall. “We thought they were going to make a road, to broaden a road to the Western Wall,“ Mawalid said. He did not at first imagine that his entire neighborhood would be razed.

One person died during the demolition. Rasmiya Abu Aghayl, a woman in her 50s, was killed when a bulldozer demolished her house while she was still in it.

“The order to evacuate the neighborhood was one of the hardest in my life,” he said, according to the book “Accidental Empire,” by Israeli journalist Gershom Gorenberg, which cites the May 1999 interview by Salman. “When you order, ‘Fire!’ [in battle], you’re an automaton. Here you had to give an order knowing you are likely to hurt innocent people.”

In a letter dated March 5, 1968 to the secretary-general of the United Nations, Israel’s U.N. representative, Yosef Tekoah said Israel destroyed the Mughrabi Quarter because it was a “slum.” Responding to a complaint from Jordan about the quarter’s leveling, Tekoah assured the UN that the “unfortunate inhabitants” of the quarter had been resettled in “respectable conditions.”

Mawalid recalled that the quarter’s population included both wealthy and poor people.

Mawalid and his brothers, mother, wife and children fled to the Bab Al-Silsila (Chain Gate) area of the old city. “My wife, Halima, carried makluba she had cooked with us,” he recalled, referring to a Palestinian dish of meat, rice and fried vegetables. “It was the only thing we were able to take.

“At Bab Al-Silsila I met a friend, Ibrahim Habib, who asked me, ‘Where are you going to go?’ He said, ‘Come to me,’ and he gave us two rooms.”

Mawalid said the refugee families were offered $200 to $300 in compensation by Israeli authorities for their losses.

Mawalid believes that transforming what was his house and the Mughrabi neighborhood into an expanded plaza for Jewish prayer at the Western Wall was “unjust” and a “usurpation.”

But, he is not seeking to turn back the clock. Mawalid says he does not dream of the reconstruction of the Mughrabi neighborhood. “This is impossible,” he said. “It’s a holy place for the Jews, and they are dreaming of it for hundreds of years and they achieved their dream.”

Rather, he would like to see the Jerusalem municipality build housing for the refugees of the quarter. According to Mawalid, during the early 1970s the municipality offered to build housing for those from the quarter, but the designated location was on land that had been expropriated from other Palestinians. “There is no way we could take land that was taken from other Palestinians,” he said.

Amir Cheshin, who served as adviser on East Jerusalem to Mayor Teddy Kollek during the 1980s, says he knows of no such housing offer. The Mughrabi Quarter residents, he said, “certainly should be given alternative housing as was done for residents of Yamit [in the Sinai Peninsula] and Gush Katif [in Gaza]”

But Cheshin backed the decision to demolish the quarter. “In retrospect, it was a smart act. Otherwise, the Kotel would have remained a miserable alley. If they didn’t do it [in the war’s immediate aftermath], they wouldn’t have been able to do it later.”

Hadari, the deputy mayor, flatly rejected Mawalid’s idea of providing housing. “Jerusalem belongs to the Jewish people,” he said. “We won’t accept any claim of this sort. Just as my parents, who left Morocco in 1948, didn’t get anything for their house, they won’t get anything, either.”

In fact, while Jewish residents of several Arab countries were expelled and lost their property without compensation after Israel’s founding, this was not the case in Morocco, which is still home to an estimated 5,000 Jews. Michael Fischbach’s book, “Jewish Property Claims against Arab Countries,” notes that Jews in Morocco largely did not suffer large scale property loss upon emigration and adds that those who left after the 1948 war were free to dispose of their property.

Nazmi Jubeh, a historian at Birzeit University, in the West Bank, considers the demolition “an absolute act of violence against people and their houses and habitat. These are people who in a few hours lost everything. We lost an eight-centuries-long tradition of North Africans and Andalusians in Jerusalem that was an important element of historic Jerusalem.”

This article was modified on May 31 to reflect that it originally mischaracterized as purely legal — instead of partly legal and partly logistical — the difficulty of Arab Jerusalemites in the city’s Eastern Sector moving to the city’s Jewish Western Sector. Until 2008, the 293,0000 Arab residents of the city’s Eastern Sector, of which Israel gained control in the 1967 Six Day War, were barred as non-citizens from buying property in the Western Sector by the Israel Land Authority, which controlled almost all that sector’s land. (A few thousand East Jerusalem Arabs who opted to take Israeli citizenship were exempt from this prohibition.) A 2008 ILA regulation removed this de jure bar by permitting Israeli residents — which the government says includes Arab East Jerusalemites — as well as citizens, to buy ILA-held property. But few have done so, because of powerful de facto barriers, according to demographic experts on the city. More than 190,000 Jews, meanwhile, have bought property in the city’s Eastern Sector.