Fast-Growing Chabad Asks: Who Will Be Leader for Next Generation? 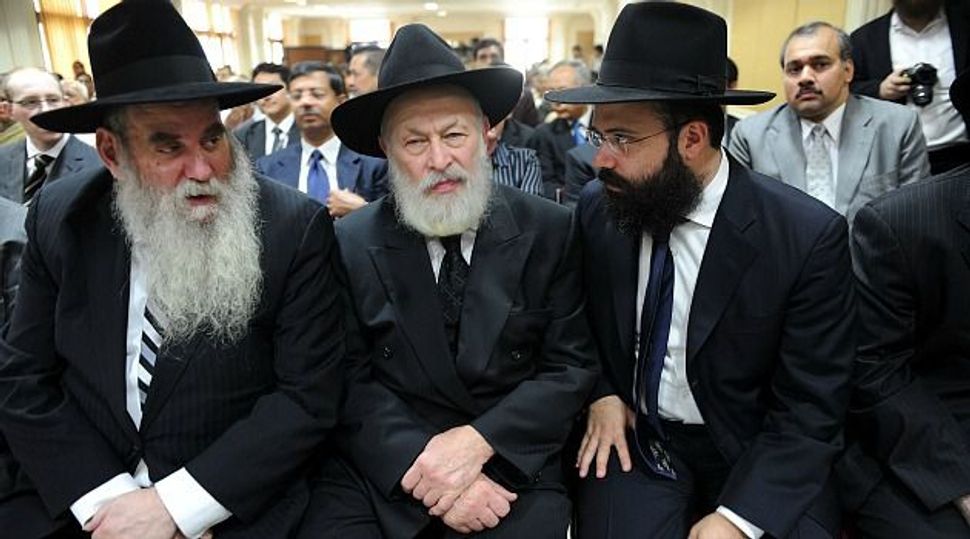 The top echelons of the Chabad movement are on the verge of a once-in-a-generation leadership transition.

The Chabad-Lubavitch Hasidic movement never replaced its spiritual leader, Menachem Mendel Schneerson, after he died in 1994 at the age of 92. Yet a coterie of gray-bearded rabbis picked by Schneerson continues to run the movement from its headquarters on Brooklyn’s Eastern Parkway, sending thousands of missionaries to outposts around the world and providing services for its growing base of followers.

Now, Chabad’s leadership is once again aging, leaving open the question of whether the centuries-old Hasidic movement can choose a new top leadership without the input of a rebbe. The uncertainty comes as the movement’s central organizations face internal challenges from messianists inside Chabad and from increasingly powerful regional Chabad leaders.

While he was still alive, Schneerson appointed two head administrators, Rabbis Yehuda Krinsky and Abraham Shemtov, who have led the movement since his death. Both are now in their late 70s. First among their possible successors is Rabbi Moshe Kotlarsky, 65, a key movement fundraiser and a powerful figure in the outreach operation.

Kotlarsky’s influence is today limited to the movement’s outreach arm and its emissaries, who seek to engage Jews from their outposts around the globe. Krinsky and Shemtov’s power is broader, stretching over several key Lubavitch institutions.

Officially second in command beneath Krinsky within the outreach organization, Kotlarsky is seen as an heir apparent. What remains unclear is whether Kotlarsky, or anyone else waiting in the wings, could attain Krinsky’s or Shemtov’s level of influence without the Rebbe around to give his blessing.

“Transitions are difficult,” said Samuel Heilman, a professor at Queens College and the co-author of “The Rebbe,” a 2010 book about Schneerson. “If the Rebbe were still alive, the Rebbe would decide. But in the absence of the Rebbe, there’s no one who can say, ‘Now you’re retiring and someone else is going to take your place.’”

In an interview with the Forward, Kotlarsky deferred questions about formal succession within the outreach arm. The outreach organization’s board, he said, would make the leadership decisions. “I wish him tremendous, long life,” Kotlarsky said of Krinsky. “With inflation, at least until 180. And I’m sure that moshiach will come way before that.”

Born and raised in the Crown Heights section of Brooklyn, Kotlarsky, unlike Shemtov and Krinsky, does not come from a particularly large or prominent Lubavitch family. In style and temperament, he is the old-fashioned Brooklyn ward boss to Krinsky’s Boston Brahmin. While Krinsky is small and tidy, with a beard tucked up at the bottom so that it appears to be neatly trimmed, Kotlarsky is big, with a round belly and long and wild facial hair.

Krinsky is technically Kotlarsky’s boss at Merkos L’Inyonei Chinuch, the outreach group that sends Lubavitch men and women to set up synagogues in towns, cities and college campuses across the United States and around the world.

The Merkos is one of four central organizations that make up Chabad’s institutional apparatus. The other core Chabad institutions include a publication arm, a social service arm and an umbrella group. Schneerson appointed Krinsky and Shemtov to leading roles within three of the institutions; Krinsky’s son-in-law, Rabbi Yosef Friedman, runs the fourth.

Even a decade and a half after the Rebbe’s death, the fact that Schneerson picked Krinsky and Shemtov carries major weight.

If Krinsky and Shemtov have the imprimatur of the Rebbe, however, Kotlarsky has the Rebbe’s army. Since Schneerson’s death there has been less to tie Lubavitchers to Crown Heights, reinforcing the already central role Chabad’s missionaries played in the movement’s life and its theology.

The importance of the missionaries, operating from their own semi-autonomous bases, has grown along with their numbers. There are 4,000 emissary families today, more than four times as many as two decades ago, according to Chabad.

It’s Kotlarsky’s job to be the link between those emissaries and the central institutions. He functions as a roving fundraiser and troubleshooter for the Merkos, sometimes mediating local disputes, other times managing tragedies. When interviewed by the Forward, Kotlarsky had just returned from Vancouver and was about to leave for Ukraine. When terrorists attacked a Chabad house in Mumbai and killed Chabad’s emissaries there, it was Kotlarsky who was dispatched to speak at their funeral.

The emissaries don’t necessarily rely on the Merkos to pay their salaries or to give them day-to-day instruction. Instead, powerful senior emissaries wield administrative authority over entire regions, approving hires and new outposts. Kotlarsky, however, has found ways to make himself indispensable to the far-flung missionaries.

It’s Kotlarsky who has cultivated Chabad’s relationship with George Rohr, the investor who funded the movement’s expansion on college campuses. Rohr provides startup grants to Chabad campus houses through the Chabad on Campus International Foundation of which Kotlarsky is chairman. Kotlarsky is also chairman of the Rohr Jewish Learning Institute, which creates classes for local Chabad houses, some of which can provide income for the local rabbis.

Kotlarsky’s political savvy is on full display in a 2010 article on a Chabad website with pictures of Kotlarsky sending out $1.25 million in checks from donors to pay for the weddings and bar mitzvahs of emissary’s children.

He also goes out of his way to avoid controversy. Kotlarsky has been reluctant to speak critically of the strain in Chabad that has insisted on proclaiming Schneerson to be the Messiah after his death. Shemtov and Krinsky have loudly denounced the so-called messianists. Kotlarsky, however, treads carefully.

“Rabbi Krinsky is the chairman of the board,” Kotlarsky said when asked by the Forward about his position on the messianist movement. “Whatever his policy is, that’s my policy. There is no schism between us on any of these policy issues.”

Kotlarsky isn’t suspected of harboring messianist beliefs. Rather, his reticence is seen as a canny bit of internal politics. “He’s less willing to alienate people who might not agree with him, because he likes to be friends with everyone,” a longtime Chabad activist said. “It’s a political thing, not a theological thing.”

Each year it’s Kotlarsky who organizes the annual convention that welcomes the missionaries to Crown Heights. He serves as master of ceremonies for the banquet, the weekend’s main event, speaking to the thousands of emissaries who attend and serving as the face of the Merkos.

That leaves Krinsky, in a sense, in the shadows. Krinsky is now 79; Shemtov is 75. Krinsky entered Schneerson’s service as a young man, serving as his driver and his close adviser. During Schneerson’s last years Krinsky led a faction of younger aides who argued for more intensive medical intervention for the Rebbe. His opponent at the time, longtime Schneerson secretary Rabbi Leib Groner, was effectively pushed out of the movement’s leadership after Schneerson’s death.

Shemtov is a member of a sprawling clan of influential Chabad officials. His brother, Rabbi Berel Shemtov, is a powerful Chabad rabbi based in Michigan. Abraham Shemtov was appointed by Schneerson to serve as his emissary to Philadelphia and continues to work from there, rather from movement headquarters in Crown Heights.

It’s not as though Kotlarsky is openly campaigning for Krinsky or Shemtov’s jobs. “I try to be a very humble servant serving the Rebbe’s mission,” he told the Forward. “I’m here to serve… I just work in the things that I’ve always been working.”

It’s hard, however, not to wonder what will happen after Krinsky and Shemtov die or retire. The two have held together the Lubavitch movement at a time when other Brooklyn Hasidic sects have been torn by internal rivalries and by dueling claims to leadership.

That’s despite a handful of serious challenges to their authority. The messianist movement, which bitterly opposes Krinsky and Shemtov, has gained currency in Crown Heights, where men on the street wear yellow messianist flag pins on their lapels, and where Krinsky has had to fight to maintain control of the synagogue in the basement of 770 Eastern Parkway.

Meanwhile, regional Chabad leaders have gained power, in some instances even distancing themselves publicly from the Crown Heights headquarters. In March, for example, Chabad in Russia publicly dissented from the international organization’s determination to pursue the recovery of the Rebbe’s library, currently held in Moscow, via a lawsuit in the United States.

Challenges have even come from within the central organization itself. In 2010, Kotlarsky and other members of the Merkos board took Krinsky to rabbinical court in a dispute over management of the organization. Rabbi Motti Seligson, a spokesman for Chabad.org, a subsidiary of the Merkos that handles media relations, would not comment on the rabbinical court proceedings.

“The purpose of having multiple people on the board is so that they represent various perspectives and, built into the system, is to seek periodic rabbinic input,” Seligson wrote in an email. “Needless to say, I cannot comment on or even confirm any specific deliberation of the board.”

Despite all this, Krinsky and Shemtov have largely kept the movement unified.

According to one source familiar with dynamics inside of Chabad headquarters at 770 Eastern Parkway, it’s hard to imagine someone like Kotlarsky, who was not picked by Schneerson, ever attaining the kind of broad leadership now held by Krinsky and Shemtov.

Yet some outside observers are sanguine. “I think they’ve done quite well with succession up until now,” said Jeffrey Gurock, a professor of Jewish history at Yeshiva University. “In general terms, these types of successions are difficult, but they’ve done well, and my expectation is they’ll work on this internally and it will work out.”

Fast-Growing Chabad Asks: Who Will Be Leader for Next Generation?