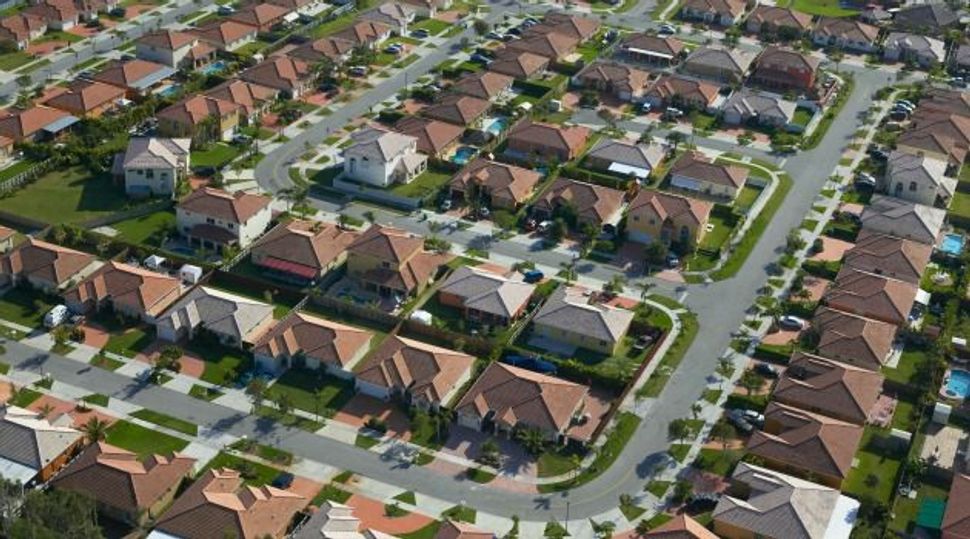 My childhood friend Sami’s mother claimed she could drive down a residential street and pick out where fellow Jews lived. Granted, most Jews don’t select colonial décor — too Daughters of the American Revolution for our taste. But she denied relying on knotty-pine coffee tables to weed out the non-Jews. Rather, she claimed to possess a “sixth sense” to intuit Jewish homes.

I wish I had her extrasensory perception. After my husband died and my daughter went away to college, I decided to sell my four bedroom house in suburban Davie, Fla., and move to a 55-plus community. But I wanted one with a large concentration of other Jews. Approximately 10–15% of Broward County’s population is Jewish, but not all of the condo developments are thought to reflect this demographic.

Century Village and Kings Point are known to be heavily Jewish. John Knox Village is not, perhaps because its namesake was a 16th-century Protestant religious reformer. When my real estate agent mentioned another, I was uncomfortable asking him if it was particularly Jewish.

I might have brought it up if I thought he was Jewish, but his last name sounded Irish. Instead, I decided to visit the community and attempt to discern its religious makeup on my own. It was time to test my own Jewdar.

I began by employing a modified version of God’s Passover method. Driving slowly down the first block of the development, I looked for mezuzas on the door frames. But because the single-family homes are set back from the road, and my eyesight is not as good as God’s, I couldn’t see as far as the front door. I pulled over, parked in front of one of the houses and began walking.

Halfway up the first walkway I spotted my first mezuza — one of those green and black ones like the souvenir my parents brought back from Israel. Okay, I thought, so at least one Jew must live here.

I repeated my trek to the next house. Alas, the door sported no mezuza. So maybe the development was 50% Jewish.

The third house threw off my calculations. A modern-looking plexiglass mezuza was affixed to the door, but the flower garden was graced by a beatific Mother Mary statue. A mixed marriage perhaps? Or maybe the original occupants were Jewish, while the new ones are not.

When my non-Jewish friend moved to a mezuza-clad house she told me she did not dare remove it. She enjoyed basking in what she felt was its spiritual aura. I wonder how many Jews would find peace from the loving gaze of a Mary statue.

Distracted, I failed to notice the gruffy old man glaring at me as I approached the doorway of the next house. Arms crossed, scowling, he impatiently awaited my explanation.

“Oh, hello,” I murmured. What could I possibly say to explain my presence at his front door? Too old to be selling Girl Scout cookies. Not enough makeup to be peddling Avon. But telling the truth seemed unwise. “Just checking for Jewish homes,” or “Do you know if many Jews live around here?” would surely sound strange.

“Have a nice day,” was all I could manage. Scuttling off his property, I wondered if Florida’s notorious “stand-your-ground” gun law included protecting one’s home from mezuza-checkers.

When safely back in my car, I decided to abandon the house-to-house search and head to the clubhouse. I wasn’t sure exactly what kind of Jew clues I expected to find there. Perhaps, like art or pornography, I would know it when I saw it.

The first announcement on the community bulletin board told me I was on to something. This Saturday night’s not-to-be-missed show featured “an internationally known singer and master comedian direct from cruise ships and country clubs across the country.” Inflated entertainment reviews are not exclusively Jewish, but the Catskills-like entertainment sounded promising.

The next two fliers assured me I was getting warmer. Forthcoming would be not one but two resident-produced theatrical shows. The “ORIGINAL Theater Group” — with the word “original” highlighted and in bold — was putting on its “Fogie Follies” in two weeks. The other group would perform its own musical revue the week after.

Any housing development with two competing theatrical performances must be home to a lot of Jews. Like the old joke about the deserted island with two Jews and three synagogues, here we had one community with two theater groups. The song from the “Spamalot” musical — “You Won’t Succeed on Broadway if You Don’t Have Any Jews” — is only half the story: If you do have any Jews, there will be “artistic differences.”

Satisfied with my findings, I headed toward the door. On my way out I grabbed a copy of the community newsletter from the (not-knotty-pine) coffee table. Leafing through it, I found all the proof I needed. The Democratic club would be meeting, but there was no mention of a Republican gathering.

The mah-jongg group was looking for two new members; see Pearl. The Hadassah chapter was planning a casino trip and the local chapter of the Jewish service organization ORT would host a luncheon on Monday (decide by Thursday: chicken, tuna or egg salad?).

I knew I had found a haimish place for myself. When I saw my real estate agent I thanked him for the suggestion. “That’s a good choice for you,” he told me. “I have lots of friends and relatives there.” As I later found out, my real estate agent was Jewish. I could have just asked him.

Nancy Kalikow Maxwell is a retired librarian and freelance grant writer whose mezuza hangs on a doorpost in Plantation, Fla. Reach her at kaliwell@kaliwellinc.com