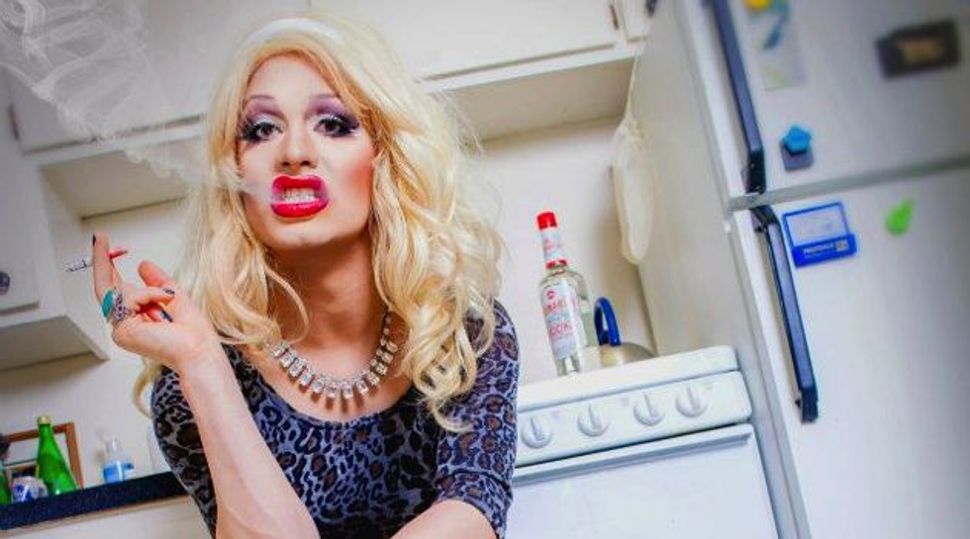 Taking a Drag: Jerick Hoffer crafted Jinkx Monsoon as an overbearing single Jewish mother who is also an aspiring actress. Image by Courtesy of Jinkxmonsoon.com

Jerick Hoffer, also known as Jinkx Monsoon, is the most recent winner of “RuPaul’s Drag Race,” Logo TV’s reality competition in which contestants compete to become America’s “Next Drag Superstar.” Originally from Portland, Ore., Hoffer, 25, has been performing in drag for 10 years. He configured Jinkx Monsoon as “the hardest working single mother in show business,” an overbearing mom and aspiring actress with delusions of grandeur. With a heaping helping of class and crass, Jinkx is a sexy yet silly baby boomer who strives for fame while trying to navigate the modern world.

On the first episode of “RuPaul’s Drag Race” this season, Hoffer introduced himself as “Seattle’s premier Jewish narcoleptic drag queen.” He was poking fun at himself — he actually does have the sleep disorder — but he also put his religion in the spotlight, a rare move in the drag world. Forward contributor Elyssa Goodman talked with Hoffer about the evolution of Jinkx Monsoon, channeling his mother through drag and finding out he was Jewish at age 18.

Elyssa Goodman: How did you craft the character of Jinkx Monsoon?

Jerick Hoffer: Jinkx Monsoon is loosely based on my own mother. The first time I started creating this middle-aged woman character was the first time I was asked to host a drag show. I had never spoken into a microphone in drag before, so when put on the spot I just started doing an impression of my mom. It cracked me up and it cracked the audience up and it’s how I started the whole persona.

Many of your influences are women of a different generation: Little Edie, Meryl Streep, Lucille Ball. What is their appeal?

I really like women who are able to be classy and poised and really well put together when the time is right, but also be complete clowns. With Jinkx Monsoon, I strive to make her pretty and likable and have this bubbly, lovely personality. But then she can also be the most crass, out of the blue, kooky character.

Does your religious background influence your drag performance?

I was raised Catholic, in a primarily Irish Catholic family, and then when I was 18 I found that I was actually of a Jewish bloodline on my mom’s side of the family. I became interested in learning about Jewish culture and Jewish heritage. I wasn’t about to presume that I should change my faith or change my whole lifestyle. But I did decide to start to explore Jinkx as a Jewish female character. It just fit for her. Jinkx is a single mother and I’ve seen so many really strong Jewish women — Sarah Silverman is a particular inspiration of mine. There’s a mixture of pride and self-loathing in Jewish female comedians that I’ve always really admired and wanted to bring into Jinkx. It was my way to get in touch with something that I found out really late in life that I was a part of.

What role does Judaism play in your life as an out, gay man?

I think if you are raised with any religious background and you come out, you have a certain amount of reckoning. A certain amount of “can I be this and this?” When I found out so late in life, when I thought I was from this Irish stock and there was actually quite a bit more Russian Jew in me than anything else, it told me you don’t have to let your bloodline or the way you were raised dictate the way you live your life. I think religion, self-expression, all of this has to be in the hands of the individual.

Ever since I was a kid I just thought that women had the better outfits, women had the better hair, women got to wear makeup. I just got jealous of what women got to do onstage. You dress up a man and ultimately it’s just a different variation on the same kind of suit. There’s a whole wide world of what women wear onstage. I just always wanted to wear the big dresses with the petticoats and the hoop skirts and all the bells and whistles rather than just a three-piece suit.

What’s up next for you?

I am going to be performing the role of Velma Von Tussle in 5th Avenue Theatre’s concert production of Hairspray this summer in Seattle. In New York, I am doing a run of my show “The Vaudevillians,” which is an original musical comedy I created with my music partner Richard Andriessen, at the Laurie Beechman Theatre in July. We keep adding more and more shows there, it looks like we might end up doing a month-long run!

What is the greatest misconception about drag performance?

That it’s easy. I don’t think many people realize just how much of an endeavor it is. It’s a head to toe transformation. It’s not just putting on a little bit of makeup and putting on a dress. Some drag queens duct tape their heads, some drag queens are bound and strapped and pulled in every which direction. To be in drag is no small endeavor.

What are the challenges and rewards of performing in drag?

The greatest challenges are the time it takes to get into drag. When I’m going to be onstage, it pretty much takes up my whole day to get ready for it. Also, drag queens are not only critiqued as performers, but as “a vision of loveliness.” You get critiqued by not just how you act on stage and what you deliver for your performance but for how you look. But the greatest rewards are when you get those moments where you’re living this childhood fantasy onstage. When I get to perform the numbers that my favorite female performers did so long ago, like when I perform a number based on “Death Becomes Her” onstage, it’s like a dream coming true for me.