Little Sign of Change at Syrian Charities After Scandal 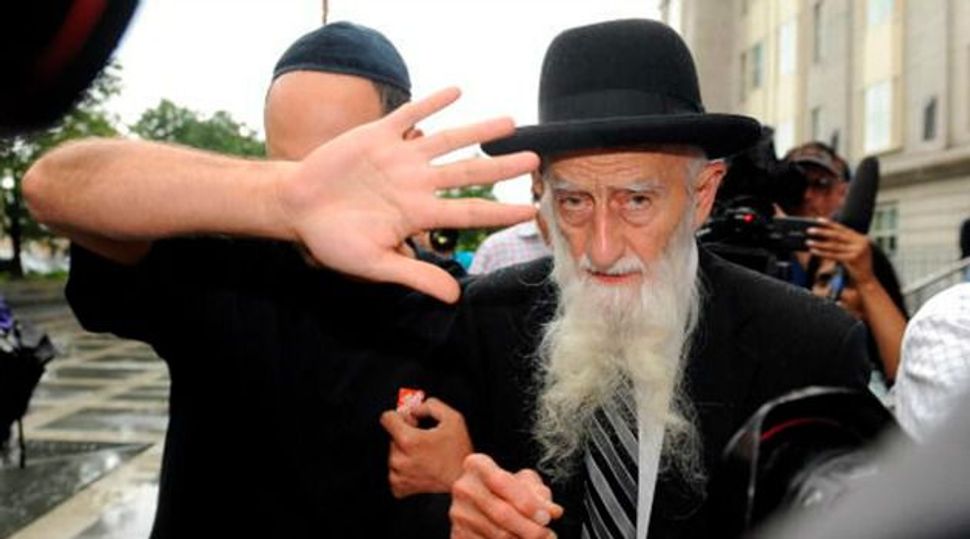 Change? Rabbi Saul Kassin, chief rabbi of Congregation Shaare Zion, in Brooklyn, was at the center of a money-laundering scandal in the Syrian Jewish community. A group that promised new transparency has yet to produce tangible results. Image by getty images

An organization that declared its intent to bring transparency to charitable donations in Syrian Sephardic Jewish communities has gone silent three years after its inception.

Shortly after the July 2009 arrests of three prominent Sephardic rabbis who had used charity funds in a money-laundering scheme, the Sephardic Community Federation instituted a compliance plan for charitable organizations and announced that nearly 20 groups had adopted the guidelines or were considering doing so.

But the organization declined to comment on how the committee was progressing. Over the course of weeks, multiple calls to the SCF’s executive director, Avi Spitzer, were not returned, nor were calls and e-mails to Eli Greenberg, who is a partner at the law firm Wolf Haldenstein Adler Freeman & Herz and a driving force in the initiative.

New York City Councilman David Greenfield, a former SCF executive vice president, would not speak on the record about the SCF and suggested contacting current SCF members. Shortly after the arrests, Greenfield proclaimed that the SCF would take unprecedented steps to certify that Sephardic charities operate at the highest legal and ethical standards.

“I would hope that they have a very good reason for their actions,” said Mark Charendoff, former president and CEO of the Jewish Funders Network, referring to SCF. “But certainly, if their purpose is to bring greater responsibility and greater sincerity, one would say, minimally, they should start by modeling that behavior themselves.”

Rabbi Saul Kassin, chief rabbi of Congregation Shaare Zion, in Brooklyn, was the most prominent figure arrested in the 2009 federal sting known as Operation Bid Rig. After pleading guilty in March 2011, Kassin was eventually sentenced to two years of probation. In all, 46 people were arrested, including a host of rabbis — among them a pair of New Jersey Sephardic rabbis: Edmond Nahum, rabbi of Deal Synagogue, and Eliahu Ben Haim, leader of Congregation Ohel Yaacob, in Deal — plus politicians and even a trafficker of human organs.

Kassin’s arrest shook the Sephardic communities of both Deal and Brooklyn, which are known for their wealth and extensive charitable donations. As a result, Greenberg was tasked with leading an independent committee to oversee not-for-profit organizations in those Sephardic Syrian communities. The accounting firm of Loeb & Troper was to certify guidelines set forth by Greenberg’s committee. Representatives from the firm did not return calls from the Forward.

By April 2010, between four and six Sephardic organizations had adopted the guidelines. At the time, Greenberg said 15 others were considering them and that he hoped to eventually have 40 groups. The guidelines included a code of ethics, as well as policies relating to conflicts of interest, document retention and the protection of whistleblowers. The initiative also aimed at diminishing cash transactions between charities and donors; however, there were no clear legal ramifications for not abiding by these rules.

Shai Franklin, a former executive director of the SCF, said that he was no longer up to date with affairs of the SCF. The group has 501(c)4 tax status, meaning it is a not-for-profit civil league or organization that operates to promote social welfare, and whose earnings are devoted to charitable, educational or recreational purposes. Franklin referred inquiries to Sam Sutton, the SCF’s president. Sutton declined to speak on the record for an interview. Jeff Leb, a former SCF executive director, also would not reply on the record.

The most puzzling silence has come from Greenberg, who was tasked with leading the committee. In 2010 he spoke extensively with the Forward about the committee’s goals and said that a list of charities that adopted the SCF’s guidelines and those that declined to do so would be published sometime in the fall of that year. Despite requests and investigations, the Forward never obtained such a list. Since 2010, it’s unclear just how much work the committee has done in total. According to 2011 federal disclosure forms, Greenberg averaged only one hour per week working with the SCF.

While members of the SCF were not willing to speak to the Forward, educators in the Syrian community talked about the arrests and how they resonated through their classrooms. During a May 20 episode about Syrian Jewish education on the radio show “Talkline With Zev Brenner,” Rabbi Harold Sutton, assistant rosh yeshiva at Magen David Yeshivah, said the arrests were a trying period for the community, and in response, Magen David instituted business ethics courses.

“The students came with questions, part of them with their loss of faith in the rabbinate,” Sutton said. “We had to explain to them — and of course the first thing we had to do was uncategorically and emphatically tell them what we thought was wrong, without any apologetics, and that people make mistakes no matter who they are, and people have to (face) the consequences for those errors.”

Some in the community didn’t believe that the committee would be effective from the start. Sam E. Antar, a Syrian Jew who pleaded guilty to fraud in 1991 as the chief financial officer of Crazy Eddie, a prominent New York-area electronics store, said he was not surprised by the lack of follow-up on the part of the SCF.

“Back in 2010 I questioned the sincerity of the Sephardic Community Federation’s efforts to reform charities and the effectiveness of its purported reforms,” Antar said. “The fact that they won’t speak, provide any update or even admit that the program still exists is of no surprise to me. Maybe they were just playing to the crowd back in 2010?”

The SCF has been involved in few public campaigns over recent years. In January it released ads attacking a plan to build a casino in Brooklyn’s Coney Island, fearing that the resort would bring crime, gambling and addiction. It also offered a $5,000 reward for the arrest of a Brooklyn man who had killed several store owners.

While it is not clear why the SCF has decided to not disclose updates about its charity reform committee, others in the field have noticed some change.

Andres Spokoiny, president and CEO of the Jewish Funders Network, said he did not have specific data. But his organization has worked with charities in the Syrian community to adopt new standards.

“As a general trend, we see some funders in the Syrian community getting much more strategic and guided by these kind of standards,” Spokoiny said. “I don’t know how representative that is of the entire community, but it is good to see that positive change is happening.”

Full transparency, however, still appears to be a distant dream. Several leading Sephardic charities contacted by the Forward, including the Sephardic Bikur Holim and the Sephardic Heritage Alliance, declined to comment.

In 2009 the JFN created suggested guidelines for non-for-profit and religious organizations seeking support from members of their organization.

“Even if religious organizations are not supposed to present 990s as nonprofits are, we tell funders that they only should fund people that file financial reports or have financial reviews by CPAs,” said Spokoiny, referring to federal tax forms that disclose a not-for-profit group’s finances. “Zero fraud is an impossible goal, but you can certainly minimize it if you follow a set of very clear rules.”

Charendoff, who now heads the Maimonides Fund, an organization that underwrites programs with a focus on enhancing Jewish identity in North America and education in Israel, said a problem remains in the Jewish community involving not-for-profit organizations that are classified as religious organizations. “The transparency that’s required by the government for them is nowhere near sufficient in terms of good practice in the not-for-profit community,” he said. “There are glaring examples of inappropriate behavior when there’s no transparency. The most well-meaning individual is going to be tempted to cut corners if light is not shone on their activities.”

The SCF’s silence on charity reform is the second instance where promises made in the wake of a high-profile scandal have shown few tangible results. The Forward reported in early May that the Magen Tzedek Commission, which promised to create an ethical kosher certification seal in response to the discovery of gross mistreatment of workers at Agriprocessors has yet to place its seal on any product.

Magen Tzedek’s program director, Morris Allen, said it’s time for customers to become more vocal and demonstrate their desire for such a change.

In the case of charity reform, Charendoff echoed a similar statement, saying that to bring about tangible change, the donors themselves have to take an active role.

Little Sign of Change at Syrian Charities After Scandal