Frank Lautenberg, Dead at 89, Recalled as Jewish Senator Who Never Ran as One 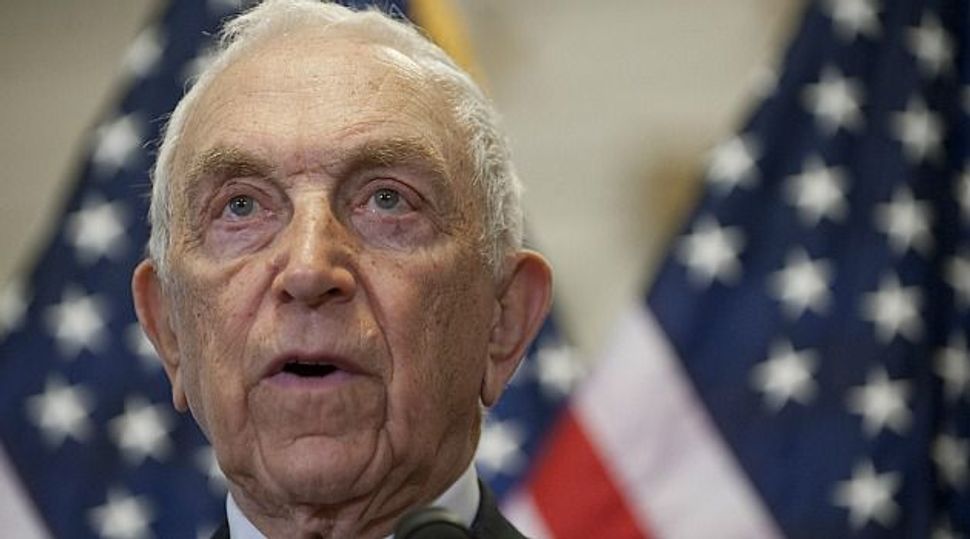 Great Generation: Frank Lautenberg was proud of his role as a Jewish community activist. But he ran on his record of business success and policy achievements. Image by getty images

Lautenberg represented New Jersey in the Senate from 1982 to 2001, and then again from 2003 until his death. He served in the 1970s as a top lay leader of the United Jewish Appeal, the organization now known as the Jewish Federations of North America. He had also served on the governing boards of the American Jewish Committee and the Hebrew University.

Amidst growing pressure, Lautenberg announced in February that he would not run for reelection in 2014. He had been visibly slowing down in recent months, with few appearances in Washington. Lautenberg visited the capital once in mid-May in a wheelchair.

The last World War II veteran in the Senate, Lautenberg was born into poverty in Paterson, N.J., before amassing enormous wealth as the CEO of Automated Data Processing, which he joined when the payroll-processing firm was a three-man storefront operation.

Though identifiably Jewish, and active throughout his life in Jewish causes, Lautenberg’s political achievements were largely not in areas of particular Jewish interest. At times, particularly early in his Senate career, he seemed to take pains not to be reduced to being simply a Jewish senator.

“He is a representative of the greatest generation and their values, which for many of us in the Jewish community are the values we subscribe to,” said Joel Rubin, a former aide to Lautenberg, speaking days before the Senator’s death.

Lautenberg was honored at a packed gala benefiting Hillel at the Pierre Hotel in Manhattan on May 29, just days before his death. Lautenberg himself canceled his appearance at the last minute, citing a chest cold. Billionaire Jewish donors Lynn Schusterman, Michael Steinhardt and Edgar Bronfman attended, as did Rush Holt, a Democratic congressman from New Jersey.

Jewish leaders speaking at the event praised Lautenberg as having helped shape their own commitment to Jewish life. Mark Levin, executive director of the National Council for Soviet Jewry, said that Lautenberg spoke to Levin and other young Jewish activists in the 1970s, “inspiring us to a life of commitment to the Jewish people and Jewish values.”

While Lautenberg was a highly visible leader in the Jewish community when he launched his first Senate run in 1982, friends say that he did not emphasize that Jewish activism in his campaign.

Stephen M. Greenberg, an attorney who worked with Lautenberg at ADP and a longtime friend, said that political advisers told Lautenberg that putting too much emphasis on his Jewishness could run the risk of provoking anti-Semitism.

“In terms of being a successful politician, the fact that he was the national chairman of UJA or that he had been involved in founding a cancer research center in Jerusalem…they weren’t helpful,” Greenberg said. Instead, Greenberg said, it was Lautenberg’s success building ADP that was touted during the campaign.

Fenwick was a legendary figure in New Jersey politics, a pipe-smoking former model with endearing aristocratic affectations who had been the model for Doonesbury’s Lacey Davenport. Fenwick, then a congresswoman, had not lost a political race since she won a seat on the Bernardsville Board of Education in 1938. In one debate, the 72-year-old chided the then-58-year-old Lautenberg, “How can you be so awfully naughty?”

“In terms of pure likeability, Fenwick had him beat by a mile,” said Ross Baker, a political science professor at Rutgers.

Yet Lautenberg beat Fenwick, boosted by an anti-Reagan backlash. “It was old money versus new money,” Baker said. “And new money won.”

Lautenberg’s political relationship with his Jewish background, once he arrived in the Senate, was complicated.

“When he first arrived, he insistently didn’t want to be known as the Jewish senator, but I don’t think he fooled anyone,” said Doug Bloomfield, who was the chief lobbyist on Capitol Hill for the American Israel Public Affairs Committee during Lautenberg’s early years in the Senate.

Bloomfield said Lautenberg’s Jewish identity was pronounced through his background and his close ties with Jewish activists, although he did not focus on Jewish or Israel-related issues during his early years in the Senate.

In his first term in Senate, Lautenberg’s office was looking for new staffers. One of the candidates for the job was a low level AIPAC employee who wanted to move from the organization into political work on the Hill. Lautenberg, according to Capitol Hill officials who knew him at the time, told his staffers he did not want to hire anyone with an AIPAC background, because of his concern of being pigeonholed as the Jewish or the pro-Israel senator.

Yet in 1988, amidst a reelection campaign, Lautenberg sent hundreds of thousands of yarmulkes to potential donors across the country, boasting of his sponsorship of a law that allowed soldiers to wear yarmulkes while on duty.

Lautenberg’s signal legislative accomplishments include the ban on smoking on airplanes in the U.S. and major drunk driving legislation. He was a strong advocate of Amtrak, the commuter rail operator.

He also pushed hard for tougher gun-control measures and pressed in recent months to pass new restrictions after the Newtown, Conn. school massacre.

“There are not many people who leave the senate with accomplishments that people can point to immediately,” Baker said.

In 1990, Lautenberg backed an amendment to a Senate appropriations bill, now known as the Lautenberg Amendment, which eased the way persecuted groups to receive refugee status in the United States. The amendment has been credited with easing the immigration of Soviet Jews to the U.S., and with allowing that community to grow as quickly as it has.

In a speech at the Hillel gala honoring her husband, Lautenberg’s wife Bonnie Lautenberg remembered a Russian taxi driver telling her husband that he had been able to move to the U.S. thanks to the Lautenberg Amendment. When Lautenberg told him that he was Lautenberg, the driver was overcome.

In the hours after Lautenberg’s death was announced, Jewish groups released statements mourning his passing.

Frank Lautenberg, Dead at 89, Recalled as Jewish Senator Who Never Ran as One