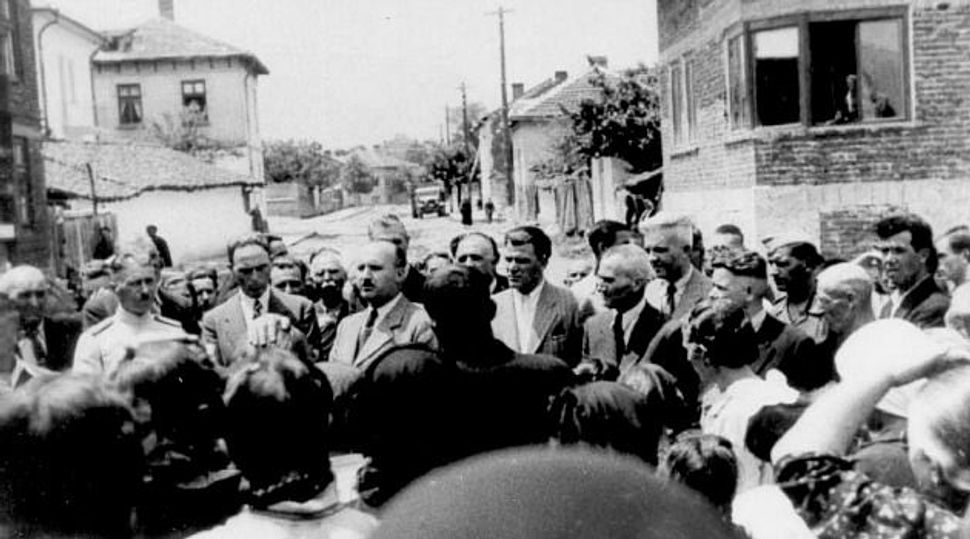 Righteous Fight: Dimitar Peshev, then a senior Bulgarian official, pleads with local officials to block deportation of Jews in 1942. Image by courtesy of yad vashem

A seemingly innocuous move to honor a Bulgarian politician who helped save Jews during the Holocaust has triggered an unexpectedly fierce debate about the less than heroic role played by the Balkan nation during World War II.

At issue is a nondescript small green sign bearing three words: “Dimitar Peshev Plaza.” A former Washington city official is pushing to have it erected on a corner of the nation’s capital, in front of the Bulgarian Embassy.

The sign memorializes the vice president of Bulgaria’s parliament during the war, who managed to postpone deportation of some of the country’s Jews to Nazi death camps.

“This is a story of what one man did to fight evil,” said Neil Glick, a former city commissioner who is pushing the measure. “Peshev’s actions show us that one person can make a difference.”

Peshev’s actions are not in question, and Yad Vashem has already declared him a Righteous Gentile. 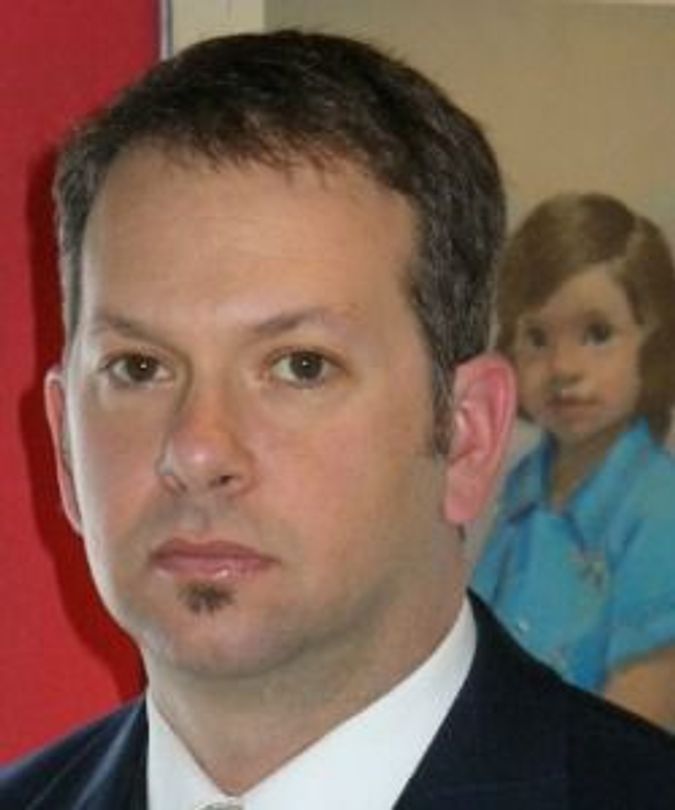 But Holocaust scholars fear that highlighting the virtues of one person could miss the broader issues about Bulgaria’s treatment of Jews during the Holocaust: its willful alliance with Nazi Germany, the draconian laws it passed stripping Jews of their rights and its handing over to the Nazis of thousands of Jews.

In the broader picture, Bulgaria’s stand was much closer to national collaboration than the resistance undertaken, for example, by Denmark, where the government and its people took mass efforts to save Danish Jews from deportation to death camps.

“There are some in Bulgaria who seek to say, ‘We were just like Denmark.’ But they weren’t,” said Paul Shapiro, director of U.S. Holocaust Memorial Museum’s Center for Advanced Holocaust Studies.

Bulgaria’s mixed record has been the stuff of academic historical debate for years. It’s somewhat surprising that, 70 years after the fact, the debate has reached the Council of the District of Columbia.

Safe to say, it’s not an issue that has gripped the city. On May 28, in an almost empty hearing room, Glick, who works as a real estate agent, presented his case for honoring Peshev in Washington.

Most council members skipped the hearing, and seats reserved for the residents remained empty. Apparently, setting the record straight on a faraway history lesson is less attractive than other items on the council’s agenda, like a lengthy discussion on arcane zoning issues and closure of city alleys.

The legislative process has taken nearly a year to gain traction. But Glick’s quixotic effort to honor Peshev has been underway for nearly two decades.

It was Rosh Hashana in 1994 when Glick found himself in Sofia during a stopover after a vacation in Greece.

Because of the holiday, he decided to go to services at the city’s old synagogue. From the president of the Jewish community sitting next to him, Glick heard about the fate of Bulgarian Jews during the Holocaust and how many had been saved from deportation to the Nazi camps thanks to Peshev.

“I was on the verge of tears,” he later recalled in an essay he wrote about the visit. “I learned that an entire nation of Jews survived the Holocaust in their own country; saved by their fellow citizens.”

Ever since, he had been looking for ways to bring the story to American ears.

Peshev, who first served as Bulgaria’s justice minister, was elected vice president of the parliament in 1938. When King Boris joined Hitler’s Axis, Peshev did not oppose the alliance, nor did he speak out against the 1942 Bulgarian legislation similar to the Nuremberg Laws that limited the rights of Jews. The Bulgarian government also agreed to deport the country’s 48,000 Jews to Nazi camps.

But when deportations began, Peshev, alerted by Jewish friends about the expected fate of those being sent off to the camps, decided to take action. He tried to convince local authorities to stop the transports, and when this effort failed he stormed the office of Bulgaria’s interior minister and convinced him to halt the deportations. By that time, thousands of Jews from Bulgarian-occupied territories in Macedonia and Thrace were already on their way to the gas chambers, but the Jews of Sofia, the country’s capital and largest city, were saved.

Peshev’s action helped Bulgaria’s Jews buy some precious time. Although he was thrown out of office, the delay in deportations allowed opposition members and leaders of the Bulgarian Orthodox Church to convince King Boris to replace the deportations to the death camps with local labor camps, thus saving many of the country’s Jews.

Yad Vashem, Israel’s Holocaust museum, recognized Peshev as being “righteous among the nations” and stated that he “was politically ostracized, but his protest was echoed by other political and clerical voices, and the Bulgarian government had to abandon its plan to deport the Jews of Bulgaria.”

“Peshev’s intervention was decisive in halting the deportation of Sofia’s Jews,” agreed Peter Black, a senior historian at the Holocaust Museum during the May 28 hearing. Experts add, however, that global factors also played a role in modifying Bulgaria’s course. By the time King Boris changed his mind and decided against deportation, Hitler’s army had already been defeated in Stalingrad and the war’s balance had begun to tip.

A letter solicited by Glick from the Bulgarian Embassy in Washington in support of honoring Peshev served only to highlight the sensitivities regarding the nation’s dealing with its past. In the letter, signed by Ambassador Elena Poptodorova, Bulgaria was described as being occupied by the Nazis during the war, whereas it voluntarily signed an alliance with Hitler. The letter also failed to mention the government’s role in persecuting its Jewish citizens.

The Holocaust Museum responded in an angrily worded letter addressed to the Bulgarian Embassy and to the D.C. Council. “The callous and devious attempts to distort the history of Bulgarian Jewry is insulting to the victims of the Holocaust and is damaging to the image of Bulgaria,” wrote Radu Ioanid, director of the museum’s international archives, in a letter first reported by The Associated Press.

“It was a very nasty letter,” Glick said, “very vicious.” At this point, Glick said, he had felt he had gotten “stuck in the crossfire” between powers battling over a historic narrative.

“What generated the museum’s involvement was what appeared to be an attempt to distort history based on this one set of actions by one player,” Shapiro explained.

The Holocaust Museum sees the government’s self-depiction as a distortion of the facts and a willful avoidance of the broader context of widespread Bulgarian collaboration with the Nazis. The museum has also been troubled by the refusal of the Bulgarian government to assume responsibility for the nation’s problematic past. In March, the parliament in Sofia marked the 70th anniversary of its action taken to stop the deportation of Jews, including that of Peshev. The parliament acknowledged that 11,000 Jews were deported to death camps, but it also argued that Bulgaria’s government at the time could not have prevented these actions. The statement ignored the fact that Bulgaria chose to join forces with Hitler and to pass its own anti-Semitic legislation.

At the May 28 city council hearing, the Holocaust Museum scaled back its harsh tone and stressed Peshev’s valuable work. Black, who represented the museum at the hearing, made clear that the museum did not take any position regarding naming a street corner in honor of Peshev, although he stressed that Peshev’s activity should be viewed as part of a group of other Bulgarians that opposed the deportation, and as being against the backdrop of a government generally supportive of the Nazi regime.

Peshev himself saw little comfort in his life. After the war, the Communists who took over Bulgaria charged Peshev with anti-communism and anti-Semitism. He was spared the death sentence, thanks to testimonies from his Jewish friends, but was sentenced to 15 years in prison. Peshev was released after a year, and went on to live his life away from the public eye until his death, in 1973.

In July the D.C. Council will vote on honoring Peshev. The Holocaust Museum would like to see a small plaque added to the plaza, adding context to the discussion and telling the story of Bulgarian Jews during the Holocaust.

“It doesn’t take a lot of words to describe the situation in a correct way,” Shapiro said.

Glick remains focused simply on honoring Peshev. Those who will see the sign, if approved, on the corner of R Street and 22nd Street, he said, “will take out their smartphones and try to figure out who was Dimitar Peshev and what happened to the Jews of Bulgaria.”