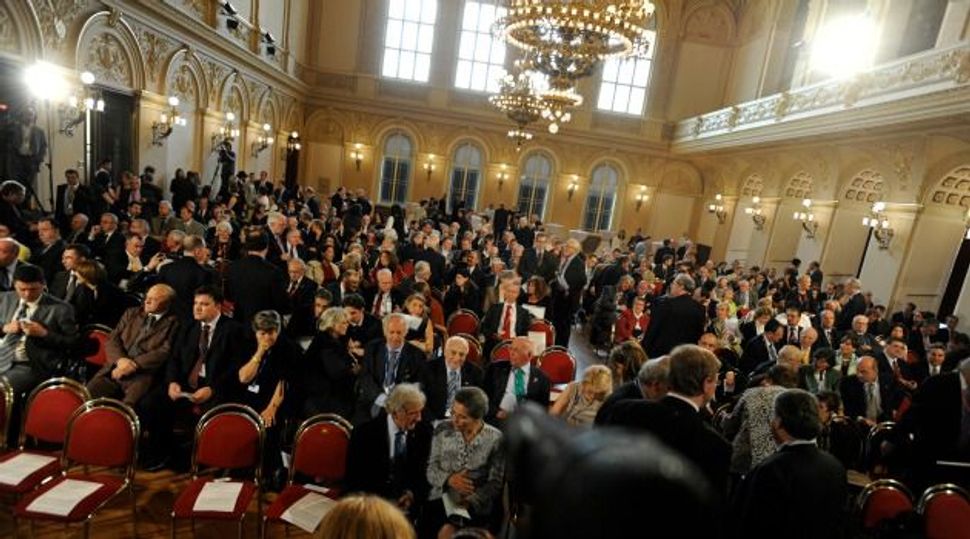 Promises Deferred: Dignitaries from 46 nations agreed to provide help for needy Holocaust survivors in a landmark 2009 conference in Prague. Now, a conference to actually gather the needed resources has been put off indefinitely. Image by courtesy of czech republic

When 47 countries affirmed a 2009 declaration pledging to address the needs of the world’s poorest Holocaust survivors, it was seen as a solemn commitment that promised concrete measures to come. But four years on, organizers have postponed the first international conference in which the participant countries were to discuss how best to meet their commitment.

The postponement of the two-day conference, which was due to begin June 25 in Brussels, has exacerbated growing disillusionment with the declaration itself. It has also highlighted rising frustration with the European Shoah Legacy Institute, a foundation created to put the declaration’s idealistic words into action.

In emails obtained by the Forward, advisers to ESLI in Israel and in America questioned the validity of the conference and call for a review of ESLI’s performance.

Herbert Block, an ESLI adviser, urged in one such email, sent March 15, that the social welfare conference be postponed so that governments and nongovernmental organizations could have more time to compile meaningful reports.

“While the needs of Nazi victims are immense, and they are aging, we do not need to quickly just have a conference that merely restates that and accomplishes nothing practical and concrete to benefit their condition,” wrote Block, an assistant executive vice president at the American Jewish Joint Distribution Committee.

Block added that “there should be some parallel discussions about the future plans for and direction of ESLI.”

Another ESLI adviser, Reuven Merhav, wrote on March 17 that just because “a well-meaning ESLI supporter” — the United States — has provided funding for the conference “does not mean we have to spend [it].”

“ESLI’s chief aim was certainly not [to] arrange conferences, in which… countries will compare notes and design desirable goals, without marking practical operational measures and [without] the financial means necessary to accomplish them,” Merhav wrote.

Block declined to speak about ESLI on the record. Merhav told the Forward, “To put it bluntly, the achievements of recent… years were very, very limited.”

While the number of Holocaust survivors living in poverty is unclear, no one contests that they total in the many tens of thousands.

ESLI was founded in January 2010 to act as a clearinghouse for the international vow to restitute Nazi-confiscated property and to care for the neediest survivors.

The 2009 declaration was affirmed at the conclusion of Prague’s Holocaust Era Assets Conference — the fifth in a series of meetings held since 1995 to discuss Holocaust issues. The Terezin Declaration was the first formal document to make the social welfare of Holocaust survivors a priority.

ESLI is funded primarily by the Czech government, which has, until this year, contributed about $400,000 annually. Additional assistance has come from the United States, which pledged $750,000 over ESLI’s first five years, and from Israel, which has committed $90,000. Douglas Davidson, the special envoy of the United States for Holocaust issues and an ESLI board member, declined to speak on the record.

ESLI has several advisory bodies and boards. They are populated with representatives of various governments and of Czech Jewish organizations as well as specialists from NGOs such as EVZ, a German Holocaust foundation, and the Conference on Jewish Material Claims Against Germany.

The Claims Conference estimates that there are about 500,000 Nazi victims alive today, worldwide, with criteria for defining who among them are needy varying from country to country. “Whether they are ‘needy’ is complicated because it’s largely based on geography,” said Amy Wexler, a Claims Conference spokeswoman. “Nazi victims in Eastern Europe and the Former Soviet Union — over 80,000 — are the most needy.” Wexler added that in North America, a quarter of Nazi victims — about 34,000 people — are considered needy.

The declaration, in its opening line, emphasized the looming social welfare crisis this population faces. Noting the “advanced age” now afflicting Holocaust survivors and other victims of Nazi persecution, the document stressed the imperative “to respect their personal dignity and to deal with their social welfare needs, as an issue of utmost urgency.”

But the declaration was not legally binding. And ESLI itself was given few resources to implement its intentions. The institute’s defenders cite these limitations while pointing out progress that the institute has made in some areas, particularly in property restitution.

But ESLI has had significant struggles. It has gone through two directors in three years; a search for a third director is just getting under way. And its main sponsor, the Czech government, has reduced its annual allocation by 20% this year,.

Jiri Cistecky, a senior official at the Czech Ministry of Foreign Affairs said the reduction was part of widespread government spending cuts.

He added that it was unclear whether Czech funding would continue at all after 2014. “It’s a big question,” Cistecky said. “If the majority of countries from Terezin decide or don’t see that it is a necessity to have such a platform and say it’s completely useless, we will say, ‘Okay.’”

Cistecky, who serves on ESLI’s board, said the organization faced other hurdles, too. Despite the large number of nations that affirmed the Terezin Declaration, Cistecky said that only a handful — primarily the United States, Israel, the United Kingdom, France, Germany, Austria and the Czech Republic — play a “really active” role in ESLI. Many other countries, particularly those in Eastern Europe, “are not active at all,” he said.

Even Stuart Eizenstat, one of the Terezin Declaration’s most vocal proponents, concedes that ESLI “has been a disappointment.” But Eizenstat, who was a special adviser to President Clinton on Holocaust reparations, said that it is unfair to lay all the blame at ESLI’s door.

ESLI can achieve only as much as its affirming nations are willing to deliver, Eizenstat said, lamenting a “lack of real attention to following through on [the] political commitments they made at Terezin.” Eizenstat blamed a lack of commitment at the White House as well as Europe-wide austerity measures and a rise in anti-Semitism in several European countries for hindering ESLI’s performance.

ESLI sent out questionnaires at the beginning of this year, asking 47 countries basic questions about how they deal with the social welfare of survivors. Knapová said that fewer than 20 countries responded before the deadline, at the end of March.

Knapová added that ESLI has now received 37 questionnaires and that the social welfare conference will go ahead at the end of the year. In the meantime, ESLI is organizing a hearing in the European Parliament to try to raise awareness of survivor issues among member states, which make up the bulk of the countries that affirmed the declaration.

Knapová said she believes that the conference will be better for the extra time its participants will now have to prepare. But some wonder why certain governments and organizations are struggling now with an issue that has been looming for decades.

Robert Wexler, a former Congressman who attended the 2009 conference in Prague, said: “I believe it took some time, too much time… for everyone involved in the process to realize the depth of the social welfare problems of Holocaust survivors.”