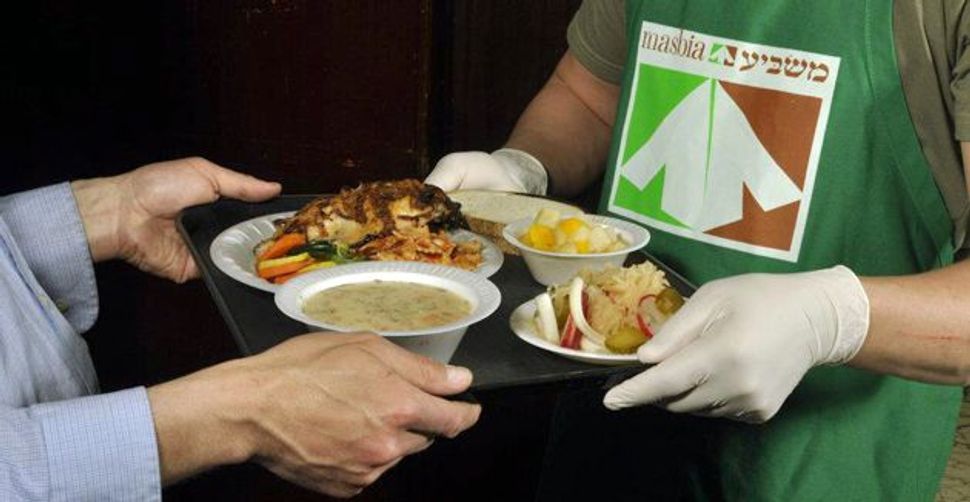 Image by courtesy of masbia

This story first appeared in the Yiddish Forverts. It was translated into English by Frimet Goldberger.

According to a study by the UJA Federation of New York, the poverty rate of the greater New York Jewish population grew exponentially as of late. More than 560,000 people — 20% of all the Jewish households in the region — live below the poverty level. This is double of what it was in 1991, not considering the 14% growth of the Jewish population since then.

This report also showed that nearly half of all children in Jewish households live under poor, or near-poor, conditions. Older, Russian-speaking folks make up the greatest percentage, followed by Hasidic families and the non-Russian-speaking elders.

When we think of poor people we envision those who cannot afford to put food on the table, or those walking around in tattered clothing. However, this issue is a lot more complicated. The report also takes into account the households that are not officially considered poor, but their income is so low, that they have to reach out for outside help — for both food and housing.

“According to the Federal guidelines, a family of four is considered poor only when its annual income is below $33,000,” said Daniel Amzallag, the Deputy Chief of Staff at Metropolitan Council on Jewish Poverty, in an interview with the Yiddish Forverts.

“This means that a family of four earning between $33,000 and $55,000 is perhaps not considered poor. But as we see it, these families are also struggling.”

In previous years, 58,000 Jewish households were in need of help. Nearly half of those were not officially poor, Amzallag said.

In order to service both needy groups — those who actually go hungry, and those who struggle financially — the Metropolitan Council partnered with another Jewish organization called Masbia (http://www.masbia.org/).

“We help those who are close to a crisis — the people who have empty refrigerators, and are in serious danger,” said Alexander Rapaport, the founder and manager of Masbia. “At our tables you can find an Israeli fundraising for a Yeshiva in Israel, and a non-Jewish Mexican worker. We treat everyone with respect, whether he is a Jew or not.”

One 102-year-old non-Haredi woman comes in every night from Boro Park, Rapaport added.

The Metropolitan Council, which provides 60% of the Masbia budget, comes to the aid of those who lost their jobs, or those who can no longer afford to pay tuition for their children’s schooling, by helping them apply for Food Stamps and Medicaid.

Masbia runs three restaurants in Boro Park, Flatbush, and Rego Park, Queens. In these restaurants, the needy are served with respect. Instead of waiting in line for food, they sit at tables and are served by volunteers. Most tables are encircled with curtains to provide some privacy for the individuals or families.

Until recently, the Masbia restaurant in Williamsburg was up and running. But due to a shortage in funds and lack of demand — even from those who had nothing to eat — the restaurant closed its doors.

“A well-to-do Jew in Williamsburg does not frequent restaurants. It is not a part of their culture,” Rapaport explained. “Moreover, they would not go to a restaurant known to serve the poor.”

William Rapfogel, Chief Executive Officer of the Met Council, said they will try to continue servicing the poor in Williamsburg. “Our volunteers bring non-perishable foods right to their doors.”

Masbia’s budget reaches 1.8 million a year, of which a mere 5% is covered by government funding; the rest must be raised from private sources. Since this is no small feat in this recession, Masbia strives to make it possible. This past Sunday, the organization attended two fundraising events: A breakfast benefit for Masbia was hosted in Kew gardens, Queens by a couple, Aron and Tzipoa Loeb; and in the afternoon Rapaport served as a referee at the Long Island Kosher Barbeque Contest, where part of the profit benefited five charity organizations in Long Island who work to combat hunger.