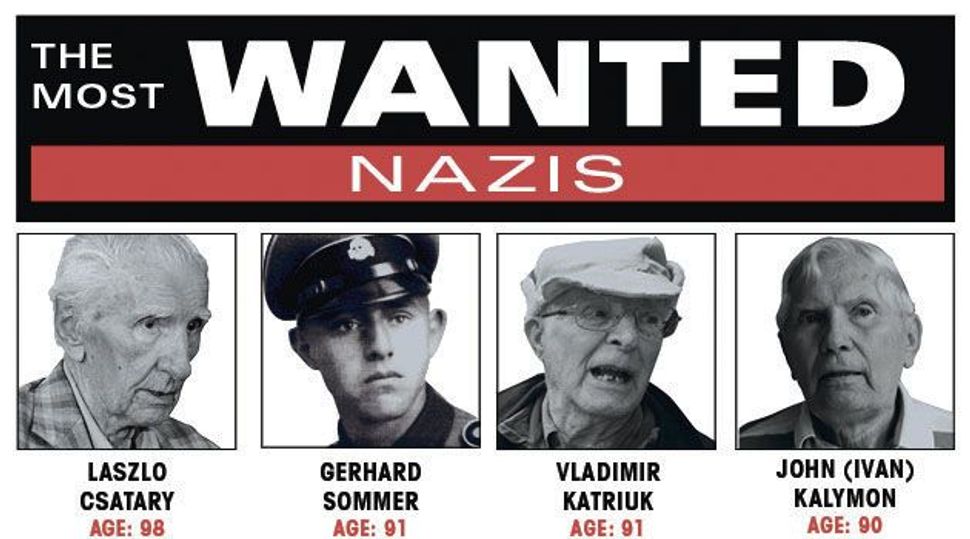 When a recent exposé unmasked a 94-year-old Minneapolis resident as the commander of a Nazi-led unit and as an SS officer during World War II, the Simon Wiesenthal Center’s chief Nazi hunter faced a vexing dilemma: Who should be bumped off the center’s “Most Wanted War Criminals” list next year to make room for him?

Fortunately for him, a spot just opened up. Laszlo Csatary — the longtime top man on the list for his alleged role in deporting 15,700 Jews to Auschwitz from a ghetto in Hungarian-occupied Slovakia — was charged with war crimes in Hungary on June 17. He will be tried within 90 days, at which time his name could be dropped as a wanted Nazi.

Michael Karkoc, a Ukrainian immigrant and retired carpenter, was not even on the list before The Associated Press located him living quietly in Northeast Minneapolis. His discovery, followed by Csatary’s indictment, highlights the sometimes quirky process by which a usually anonymous and elderly individual living quietly somewhere, but with a dark secret, can suddenly find himself posted everywhere as one of the world’s most wanted human rights offenders.

In any given year, who gets bumped “depends on how many people are brought to justice,” explained Efraim Zuroff, the Wiesenthal Center’s chief Nazi hunter. In addition, old Nazi war criminals don’t just fade away; they also die. “Two of those people might pass away this year,” Zuroff said of the present list members. But don’t fear for the list’s demise. Despite the passage of time since World War II, said Zuroff, “There’s no shortage of names, there are plenty of people who should be brought to justice and whose names are known.”

J. Edgar Hoover, who launched the world’s first most wanted list in 1950 with the FBI’s “10 Most Wanted,” may enjoy pride of authorship of this unique publicity and marketing device. But the Wiesenthal Center’s “Most Wanted Nazi War Criminals” is not far behind in terms of prominence.

All of which highlights a series of questions about the state of Nazi hunting some 68 years after the Nazis’ defeat: What does it take to catch a Nazi nowadays? Who makes the list? What kind of heinous act warrants first place? And what happens when someone is brought to justice or dies?

Zuroff, director of the center’s Israel branch, and author of “Operation Last Chance: One Person’s Quest To Bring Nazi Criminals to Justice,” has spent countless hours developing a system to classify the remaining Nazis at large.

The center’s annual list, he said, is not necessarily a roll call in absolute terms of the world’s worst surviving Nazis. Rather, he said, these are “the people we hope will be brought to justice in the coming year.”

Three factors determine where someone falls on the list. The first is command responsibility. For example, Csatary was a senior officer in the Hungarian police force at the time his crimes were committed.

The second determining criterion is whether one personally committed murder. Csatary did not, which brings Zuroff to the third standard: the scope of the crime. “He didn’t commit murder himself,” Zuroff said. “But he was responsible for the death of more than 15,000 people. That gives him top priority.” Csatary, 98, is currently under house arrest in Hungary, awaiting possible extradition to Slovakia to stand trial.

Zuroff’s main task is pressuring governments into taking action against those whose crimes have already been denounced or exposed. Until that initial exposure, the center has little or no role to play and must rely on individual government agencies. The case of Csatary, pursued from beginning to end by Zuroff and his team, is an exception. “That’s our victory!” Zuroff exclaimed when asked about the news. 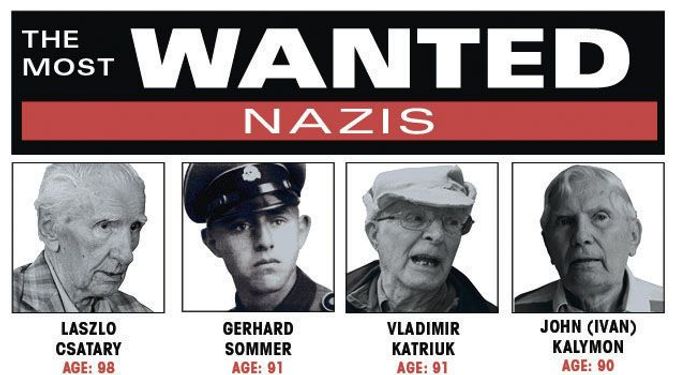 In the United States, Eli Rosenbaum, director of strategy and policy for the Human Rights and Special Prosecutions Section of the U.S. Department of Justice, is responsible for bringing these crimes to light.

Rosenbaum has been hunting Nazis since 1979, when, as a law student, he saw a newspaper advertisement announcing the creation of a Justice Department unit that would pursue Nazi war criminals living in the United States.

Thirty-four years later, in what he calls “a summer internship gone awry,” Rosenbaum is still at it — the longest-running investigator of human rights violators living in the United States in the Justice Department’s history. Five of the 10 names on Zuroff’s list are people who were discovered and prosecuted by Rosenbaum’s team.

What sounds like intrepid and adventurous work is actually based on paperwork — a lot of paperwork. In the 1980s, Rosenbaum’s agency, then known as the Office of Special Investigations, built a database of all the people who could reasonably be considered to have had Nazi involvement. This involved, Rosenbaum said, going over more than 70,000 names “in SS records and on Most Wanted lists” and comparing each of those names against immigration records in the United States.

“People that have read too many John le Carré novels think that the way these cases originate is that a survivor recognizes their oppressor on the street. That’s not the reality,” Rosenbaum explained. “I wish it were more like television.”

From a team that numbered 50 strong at its peak, in the 1980s, the number of HRSPS staffers devoted to rooting out Nazi war criminals is now down to 10. For years, the OSI was the only law enforcement agency to have its own team of historians on staff, as well as translators who spoke German, Polish, Hungarian and other languages.

Because the alleged crimes were not perpetrated on American soil, Rosenbaum and his team have no criminal jurisdiction to prosecute. They can only build a civil case for the suspect’s deportation to his country of origin, or to some other country with criminal jurisdiction. In Karkoc’s case there are three possible options: Ukraine, his country of origin; Poland, where he committed the majority of his crimes, and Germany, because he worked under the auspices of the Third Reich.

In the end, like Zuroff, with whom he has a “very good relationship,” Rosenbaum performs work that relies on the willingness of a foreign government to prosecute old men and women for crimes committed more than half a century ago.

“It’s very frustrating,” Rosenbaum admitted. “If you have a low frustration threshold, this is not the work you want to do. The vast majority of the people we have returned to Europe have not been prosecuted.” Formal conviction is rare, he noted.

Given this reality, Zuroff has carved out a six-level scale of achievement for gauging his own success.

The first step is to expose the criminals publicly. “That is the most painful punishment for the criminals, because a lot of the time, their families have no idea what they did during the war,” Zuroff explained.

If an official investigation is launched, that is a second step. An indictment or extradition is a third. If a country is really determined, the case might go to trial. And in rare cases, the criminals are convicted and finally punished.

“It’s very hard to get to six,” Zuroff said. In part because of a lack of political will in many of the European countries where these people reside, but also because of the advanced age of the criminals in question.

“We’re running out of time,” Zuroff explained. “Do you know soccer? After 90 minutes are over, the referee decides how much time to add because of delays and injuries. You can win a game or lose a game in those extra minutes. So, we’re in injury time.”

In 2002 this urgency led Zuroff to help launch an initiative offering cash rewards for information leading to the indictment and/or conviction of Nazi war criminals. Operation Last Chance, a project dreamed up by Aryeh Rubin, a Florida-based investor, and run by Zuroff and his office, offers would-be tipsters up to $33,400 for such information. Csatary’s exposure and subsequent prosecution is a direct result of this campaign. A partial reward has been paid to his informant, with the rest pending on the verdict and eventual sentence he receives at trial.

From the 2002 launch of Operation Last Chance, until December 2011, the center received 635 tips about alleged Nazis. Of these, 105 suspects were subject to prosecutions by respective governments. During this period, Zuroff has given out a total of $10,000 in reward money to two information sources, one in Croatia, the other in Hungary. In December 2011, the second phase of the project, known as Operation Last Chance II, was launched in Germany, funded jointly by Rubin and U.S. investor Steven Mizel, with the promise of higher rewards for information.

According to Zuroff, while the United States has the political will to deport suspected Nazi war criminals, countries like Hungary and Lithuania have good reasons to stall actual prosecution efforts. In Eastern Europe, the role of local government collaborators included “active participation in mass murder,” Zuroff said. “The Nazis integrated the local population in the mechanisms.”

Beyond Zuroff and Rubin’s rewards program, the time, money and effort spent by the Justice Department and the Wiesenthal Center to pursue Nazi war criminals are considerable.

But, with almost all of the senior Nazi war criminals long captured or dead, those on the Most Wanted list today tend to have ranked relatively low in the Nazi war machine. There simply are no more Eichmanns or Mengeles. Alois Brunner one of Eichmann’s top aides, fled to Syria after World War II and formally remains on the list — but, born in 1912 and not seen since 2001, he is in a special section with an asterisk next to his name, because even Zuroff concedes that now he is almost surely dead.

These realities lead some to question this allocation of resources.

“I wouldn’t be so hung up about the age,” said Ruth Bettina Birn, a former colleague of Rosenbaum’s and former chief historian of the War Crimes and Crimes Against Humanity Section of Canada’s Ministry of Justice. “But are there still people who are significant?….There is no one who is a decision maker.”

In 2008, when Csatary’s true identity was uncovered in Hungary, Holocaust historian Laszlo Karsai, a son of Holocaust survivors, made an additional argument that prosecuting these men has become a waste of resources and time. “Csatáry was a small fish,” he told the BBC. “The money spent hunting down people like him would be better spent fighting the propaganda of those who so energetically deny the Holocaust today.”

Zuroff counters that through their pursuit of these elderly men, he and other activists are also doing what Karsai demands. The ongoing investigations, he said, serve as an effective tool against Holocaust denial.

Beyond that, “the passage of time in no way diminishes the guilt of the killer,” Zuroff said. “Just because these people are old does not turn them into righteous gentiles. Our obligation is to the victims; [prosecution] sends a powerful message to those who perpetrate terrible crimes.”