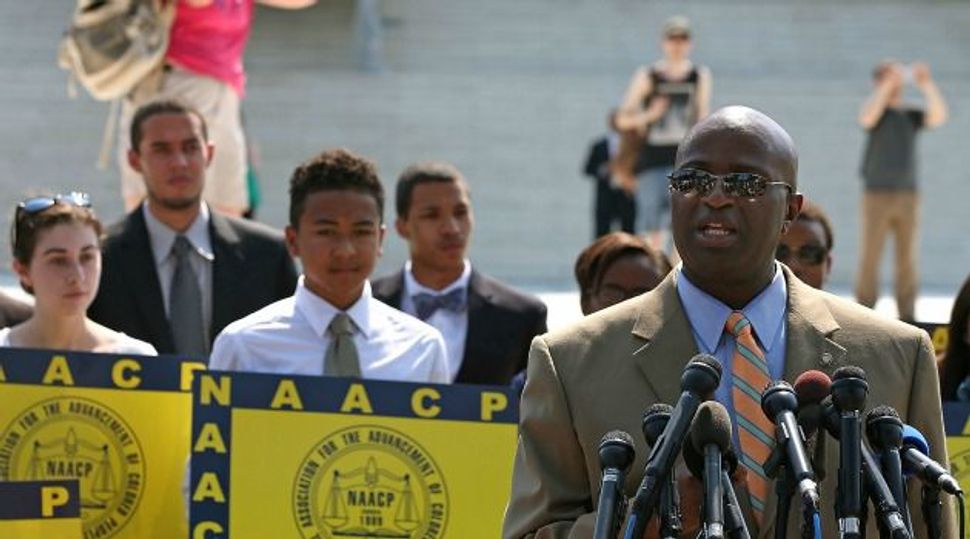 Rock the Vote: Demonstrators protest outside the Supreme Court after the justices struck down parts of the Voting Rights Act. Image by getty images

The Supreme Court’s June 25 decision striking down key elements of a longstanding law protecting minority voting rights touched a chord with the Jewish community which has strongly supported the law although its direct impact on Jewish voters has been marginal.

Jewish organizations decried the court’s 5-to-4 ruling, which deemed part of the 1965 Voting Rights Act unconstitutional. The Supreme Court ruling gutted the law’s requirement that certain states and districts with a previous history of discrimination receive pre-clearance from the federal government before making any changes to election procedures or voting laws.

“We are extremely disappointed by today’s Supreme Court decision,” said Rabbi David Saperstein, director of the Religious Action Center of Reform Judaism. The ruling, he argued, “effectively overturns the nation’s longstanding commitment to protecting the voting rights of all citizens.”

The Religious Action Center was among several Jewish groups that joined a friend-of-the-court brief submitted by the Leadership Council on Civil and Human Rights in support of maintaining all provisions of the Voting Rights Act. Symbolically, a plaque mounted on the wall of the RAC’s headquarters in Washington notes that the Voting Rights Act and the Civil Rights Act were written in the building, a reflection of the close cooperation between the Jewish community and the civil rights movement in the 1960’s.

The American Jewish Committee, which also joined the amicus brief in favor of VRA, condemned the decision. Marc Stern, the group’s general counsel, said that while the ruling only struck down certain parts of the landmark civil rights law, it “will harm the ability of all citizens, of whatever race, to vote.”

The court, which issued its decision in response to a case brought by Shelby County, Alabama against the Justice Department, ruled that the criteria for subordinating states to the Voting Rights Act were based on outdated information.

“Our country has changed,” Chief Justice John Roberts wrote in his majority opinion, “and while any racial discrimination in voting is too much, Congress must ensure that the legislation it passes to remedy that problem speaks to current conditions.”

Congress passed its most recent renewal of the Voting Rights Act in 2006, for a period of 25 years, by a vote of 99-0 in the Senate and 390-33 in the House of Representatives. Its constitutionality was previously upheld by the Supreme Court four times, most recently in 1999.

Nevertheless, Roberts was joined by all conservative-leaning justices of the Supreme Court in his majority decision.

The minority opinion was signed by all three Jewish justices on the bench: Ruth Bader Ginsberg, Elena Kagan and Stephen Breyer. Writing for her fellow liberals on the bench, Bader Ginsburg argued that Congress’ renewal of the Voting Rights Act was an “altogether rational means” for achieving “the equal citizenship stature of all in our polity, a voice to every voter in our democracy undiluted by race.”

The court left the door open for Congress to legislate new rules that would determine how to decide which states and districts should be covered by the VRA. But political analysts were unanimous in deeming such a move as highly unlikely in the current political climate. The nine states covered by the law: Alabama, Georgia, Louisiana, Mississippi, South Carolina, Texas, Virginia, Alaska and Arizona, are largely Republican, and the removal of the VRA pre-clearance requirement will make re-districting easier for those ruling their state capitals to draw maps favorable to their party.

The Voting Rights Act was aimed primarily at deep-South states in order to uproot widespread practices of voter discrimination that robbed many African-Americans of their right to participate in the elections. Its impact on Jewish voters has been marginal. In New York, where Brooklyn, Bronx and Queens are covered by the VRA, the need to redistrict in favor of minority communities has, in the past, touched on areas heavily populated with Jewish residents who, for the purpose of this law, were viewed as white. Jewish areas in Florida, California and in Texas also came under the law’s jurisdiction.

But for most in the community, the fight to preserve the Voting Rights Act was related directly to the history of Jewish activism in the civil rights struggle and the community’s liberal values.

“For almost 50 years, the Voting Rights Act has protected minority voters, helping to ensure that everyone, no matter their race, ethnicity, or national origin, can exercise their constitutional right to vote,” said the Anti Defamation League in a statement. The National Council of Jewish Women also expressed its dismay. Nancy Kaufman the group’s CEO, termed the right to vote “a bedrock of our democracy – a right for which men and women sacrificed their lives.”

The Jewish Council for Public Affairs, a policy umbrella organization of Jewish federations, which advocated for the passage of the VRA in the 1960’s, made clear that it still viewed the law as essential.

“Today we recommit ourselves to the principles of the VRA we first advocated for decades ago,” said JCPA chair Larry Gold in a statement. Gold said that JCPA would push Congress to make the needed changes in order to implement the law.

Saperstein suggested that Jewish activists, alongside others in the civil rights community, would now also vigorously scrutinize states known for voter discrimination in the past and take legal action against any new attempts that have a racially discriminatory impact.